WANNA KNOW WHAT WE HAVE PREPARED FOR YOU? - Non Architecture Competitions

WANNA KNOW WHAT WE HAVE PREPARED FOR YOU? 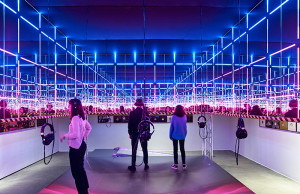 Wondering why are you hearing from us so soon?
Easy: we are here to prepare you for the Friday night fever!!

Since the Vitra Design Museum is the competition partner for “Dancing – Alternative designs for clubs“, we want to share with you our talk with Jochen Eisenbrand, curator of the exhibition Night Fever. Designing Club Culture 1960 – Today.
So grab yourself a drink, and enjoy what we have prepared for you:

[Non Architecture] Clubs have rarely been considered an example of architectural quality, but your exhibition seems to state the opposite and bring dignity to this architecture. Where does it come from? Why the interest in nightclubs to make an exhibition?

[Jochen Eisenbrand] At present, clubs and urban nightlife are in a somewhat ambivalent state. On the one hand, the city centers of metropolises that were once famous for their nightlife, have become too expensive and the urban fabric in these cities offers less and less cracks for clubs to exist. On the other hand, many cities have discovered nightlife as an important factor of the urban economy and have started supporting the local club scenes, for instance by establishing the position of a night mayor. This interesting current situation was one reason to look back at the history of clubs and how they developed. The other reason is, that we discovered that in the 1960s there was actually a very interesting discourse on the architecture of clubs as a new kind of spatial typology.

[NA] Still focusing on the originality of “Night Fever”, how can we approach this exhibition as a point of inspiration for architects and designers alike? What are the specific features or elements that make it unique?

[JE] What we found fascinating about clubs is that they were undetermined spaces that offered a platform for experimentation, in terms of interior design but also in terms of what was happening there. They were particularly interesting whenever they had to accommodate many different kinds of uses, from dancing to concerts, from experimental theater to exhibitions. The results were highly flexible spaces working with modular and transformable elements. Clubs are also about creating spatial atmospheres by means of light and sound.

[NA] Curating an exhibition can be considered a process of research, and sometimes discovery. Which would be the main “finding” you would highlight? A particular trend or a curiosity factor that seems to be surprising and relevant.

[JE] Generally speaking I was quite surprised by the important role that clubs in New York in the 1970s were playing for the city’s art scene and how they served not only as a meeting ground but also as canvasses for young and emerging artists. More particularly I was stunned by a New York club called Area that existed from 1983 until 1987 and merged nightlife with installation and performance art.

[NA] In the Night Fever catalogue you refer to the exhibition as a “large-scale examination of the international relationship between club culture and design”. In your perspective, how has design influenced the club culture over time? Or is it all the way around? Clubs and the way clubs where used and perceived, somehow affected particular design trends of the time?

[JE] The strongest link between architects and designers and the club scene existed in Italy in the 1960s when new club designs were discussed in magazines like Domus and Casabella. Clubs offered young architects and designers a new kind of space that was not yet predefined so that they could try out new concepts. In turn, the clubs profited from the ideas of these designers, architects and artists. This two-way relation continues because clubs offer a platform and in turn profit from those who use it. The influence of clubs, I would say, was more indirect. They were pioneers in creating event spaces that one sees not in many other contexts too.

[NA] How do you see the role of the clubs in the society? Do they have the same role as they used to have 50 years ago? How has the relationship between the two evolved?

[JE] Nightlife is a counterpoint to the routines of the everyday and clubs have been and are a major outlet for this. As the club scene became more professional throughout the 1970s and 1980s, it also became more clearly focused on music and dancing, with other cultural offerings playing less of a role. But recently we see examples of clubs that again offer more than just escapism.

[NA] Do you see nightclubs as spaces where different disciplines merge? Or are they more like flexible containers, to be updated according to the latest innovation in the entertainment industry?

[JE] There is of course both but it does get more interesting when different disciplines like interior design, lighting design, installation and performance art get involved, and when a club emerges from a local scene of music lovers and artists. This is why we found the topic so fascinating, because it relates to many different design disciplines, even fashion and graphic design.

[NA] Also in the exhibition catalogue, you classify nightclubs as “the epicentres of escape and experimentation”. Do you feel that there still is a lot of experimentation in nightclub spaces?

[JE] It seems to have become more difficult because many of the things that have once been unique to nightclubs are now also covered by other institutions or events and because festivals of Electronic Dance Music have become quite a competition. We found the most interesting night club scenes to have evolved in cities that were in a state of transformation, like New York in the 1970s or Berlin in the early 1990s. Such particular situations are rare but they can happen again and again.

[NA] We conclude with a simple question, what’s next for the club culture? Where are we heading? What is the potential future of club culture?

[JE] Clubs, or the idea of the club has become more mobile and many clubs pop up temporarily, just to vanish and reappear somewhere else. Given the increased economic pressure in many inner cities, the concept of the club as a cultural center where many different things also deserves to be picked up again.

After this wonderful talk, there is only one thing left to say: If you are close by, don’t miss the opportunity to visit the exhibition and let yourself be blown away!

See you all soon!
Daniela