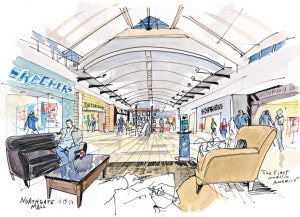 For this week, we will dig into all the issues that relevant to the brick and mortar shop. The corner shop, the family-owned grocery, the superstore, the outlet and the high end concept store indicate the wide range of types of shops that differ in scale, character and purpose.

As already mentioned in previous newsletter, e-commerce has put traditional retail under a lot of pressure, yet still remains the preferable choice of the  majority of consumers, and it is likely that it will remain so in the future. In other words, despite the massive changes and transformations in retail, the shop is has remained too resilient, in that we still mainly buy goods and services in physical shops.

2 – High streets, where many shops are accumulated, have long been regarded as the heart of many communities, but they are lately in decay. Phil Hubbard’s book The Battle for the High Street, is a powerful argument against retail gentrification, and a timely analysis of class conflict in austerity Britain. Read the intro here.

3 – For every late night craving, or a missing ingredient for the recipe (we have already started cooking), we are used to simply head fast to the nearest convenience store. Have you wondered how is it to manage a small but demanding business like that? Read an interview with a Canadian convenience store owner here.

4 – The shopping mall, as a retail typology, rose in mid century, as the ultimate destination for shopping. Yet, although it spread all over the world, the malls were short lived, as in recent decades, many shoppers have abandoned them, instead doing their shopping at big-box stores or online.

5 – As unexpected as it might seem, the inventor of the American suburban shopping mall was a socialist. He saw the mall as having the potential to re-centralize suburban sprawl, but things went astray.

6 – ‘Dead malls’ is a video documentation of some of the most depressed shopping malls in the mid-atlantic region and beyond. Enjoy an informative tour appreciating the beauty of abandoned malls, here.

7 – Big-box stores are in decay too. After the 1990s boom that almost teared down small businesses, big-box stores are hit by e-commerce, but also by consumers’ prioritizing of quality, and ethical shopping. What are we going to do with what’s leftover then?

8 – What awaits us in the future is probably something similar to Amazon Go, the online retail giant’s physical store version, which first opened in Seattle in January 2018. Equipped with sophisticated image recognition software and artificial intelligence, these stores have promised to make as convenient and relaxed as possible.

Do you envision the shop of the future as a physical shop? If not, where do you think we will be going to acquire our daily goods and services?

Looking forward to seeing your creative answers in your submissions to the BUYING competition!