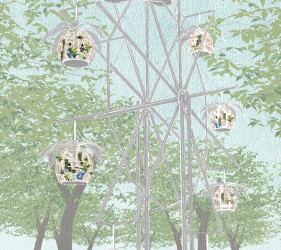 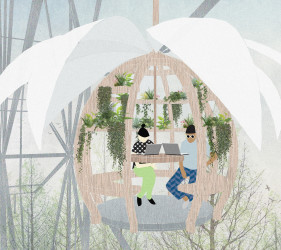 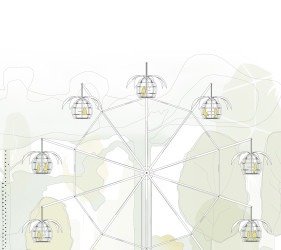 Rejecting the typology of the contemporary corporate workplace, that in seeking to encourage personal interactions through open plan, has evolved into a space that is antisocial and highly digital, rigid in system, and unkind to the nature of human movement; This proposal seeks to create a space that alleviates the rigidity and stress of the stereotypical workplace.

Responding to the rise of the “third space” – a new intermediary typology between the office and the home – and extending this notion to workplaces that are not held down by attachments to cities, wired connections, or traditional demand for desk space.

This is a structure to mobilise rural living, working and thinking, that takes precedent from the natural habitat of the rainforest on the study that better interaction with the natural world has significant value on concentration and mental clarity. Through movement, and exposure to natural elements, the environment invokes a return to our intrinsic biological behaviour; realising age-old knowledge, such as the Japanese concept of ShirinYoku: the medicine of being in the forest.

Offering tranquil privacies at the canopy, contrasted with intensities of interaction at the ground, shaped both by supreme influence of the variability of the environment, and individual freedom to control experience of it: The workplace becomes fair, and fun.