Gallery of the Anthropocene 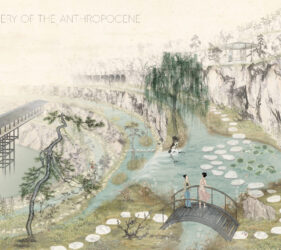 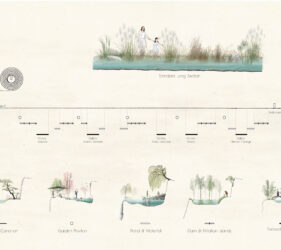 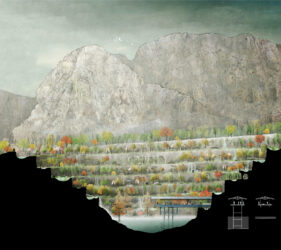 An array of mechanisms, programs and moments redefine an abandoned mine pit in Shandong, China. The scheme aims to acknowledge the area’s rich cultural heritage, intensely industrial past, and boundless potential. It charts a way to a brighter future – revitalising this degraded post-industrial landscape for locals, travellers, and wildlife alike.

A constructed river flows down the minepit’s ramp and gets progressively treated by the revegetated landscape before collecting into a reservoir at the bottom. This complex system of dams, flows and landscaping creates habitat for wildlife. Where the original mine pit represented an extraction of resources such out of the site, the proposal seeks to build up resources such as clean water and biodiversity into the site.

Visitors follow a path along the river, experiencing moments such as garden pavilions, waterfalls and galleries. The series of excavated galleries document the largely adverse effects of the Anthropocene, covering themes such as mass extinction and global warming. The path terminates at a teahouse, where visitors can rest, contemplate, and collect their thoughts over a cup of tea.

This proposal seeks to develop within visitors an understanding of Humanity’s ability to damage and scar, but also the possibility to repair and recover. 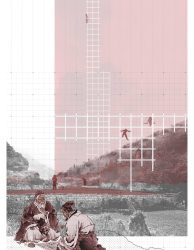