RECLAIMING PARLIAMENT, A Monument of the People 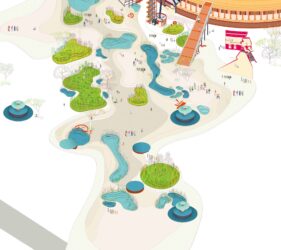 Project description: No single building typology represents as much a nation’s political culture as much as its seat of the government- the Parliament building. Located along the ceremonial axis, ‘Rajpath’, in New Delhi (capital of India), the Parliament is part of the monuments of the Indian State. However, its design prohibits public use, limits access and uses architecture as a tool of displaying power.

How can the people of a democracy create their own monuments within this power system?

The seat of power must be infused with citizens who time and again reclaim their power, assert their rights and challenge the State. The proposal is a designed as everyday objects in a park that carve space into, climb over and pierce through the parliament building to create new forms of engagement of the citizen and the State. Programs imagined here are those such as an amphitheatre, a viewing deck, a protest ground (staircase), student radio network, referendum office. As they deconstruct the Parliament building both visually and architecturally, friction is created within the precinct, one that is essential to a democracy. This is seen as a starting point to eventually lead to a more inclusive monument of the State, one that is built, unbuilt and redesigned by its people.