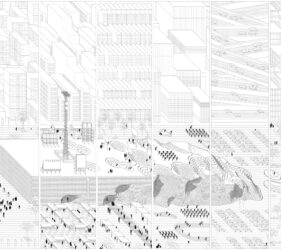 Monuments were historically constructed during civilizations’ peaks, leaving a society’s eternal mark on Earth. Questioning if we in fact have arrived at such a peak, we feel that to embark on such a project could only result in yet another physical manifestation of mankind’s arrogance. Which is why we propose a design that is in a way opposing the typology of a monument. In times when all kinds of statues and monuments around the globe face sudden backlash, we suggest a 2020 monument negating all characteristics that render the traditional monument problematic today.

The anti-monument is not figurative, in fact it is merely a pedestal. Its surface is to be filled by the fragmented and individualized society of our time. As such the object is ultimately inclusive, it does not uphold one interpretation of our global identity.

As opposed to traditional monuments, which are fixed in place and determined to last eternally, the anti-monument is locationless. By being an anywhere-object, it does not comply to any kind of symbolism or to any ideology inherent to a location.

Additionally, the anti-monument marks and only exists in a specific moment in time. It is meant to invite, not meant to withstand the elements, whereby it defies one of the basic principles of architecture. Made of layers of non-prestigious cardboard, the anti-monument will supposedly last one year, during which it will melt, meander, shift and shrink. An object with a start and an end, inevitably defaced and deformed, it is a manifestation of a single moment (2020) and will evolve with the memory of the people who experienced it.