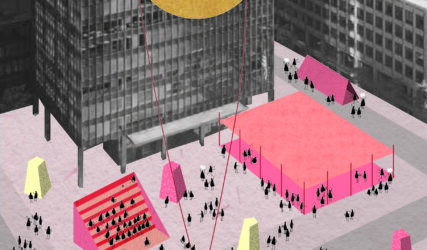 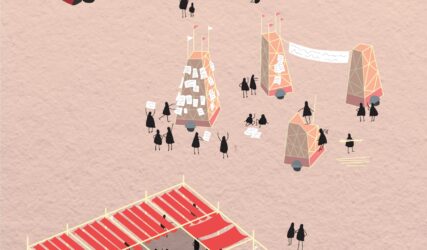 Some theoreticians have associated recent neoliberalism with the ‘post politics’ condition : a disengagement of government from social policies, a focus on economical affairs, a general depoliticization of society and a substantial decrease of counter powers as well as identified protest movements.

Yet recently there has been a rise of fresh protest movements questioning our representative democracies whose mode of operation is the occupation of public places (Occupy Wall Street, Podemos, Nuit debout…).

Public space and architecture have been as well impacted with neoliberal and capitalistic dynamics, with the over-development of private spaces, the multiplication of gates and entrances, and an overall merchandization of space and facades.

We need to take back public space, to reinvest places with the aim of building a strong public sphere with debates, gatherings, and common values. The proposal wants to make the process easier by having fast and ready to use spatial devices for a quick and more pleasant occupation of public spaces. The design proposal seeks active participation from people as a method for learning and re-appropriation of space and politics. It takes position in the cultural hegemony debate by ideas and actions formed in a festive and carnaval-like attitudes.