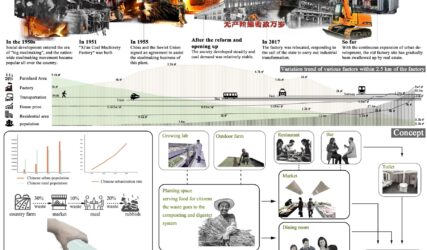 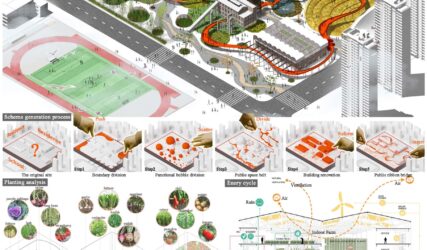 With the rapid urbanization process in contemporary China, real estate developers and the government have jointly built a large number of labeled high plot ratio residential buildings, and the urban public space is insufficient and single. At the same time, agricultural land is constantly being swallowed up, and the rural development lags behind, resulting in a large number of rural population into the city, the rapid decline of agricultural workers, China is facing the crisis of food shortage in the future. Xi’an, as an important industrial town after the founding of new China, has demolished a series of industrial heritages in the rapid development of the city. Fortunately, there is still an abandoned factory in the eastern suburb of Xi’an, which will be demolished soon. Taking this opportunity, we put forward the urban strategy to transform the factory into a rural farm in city, which will become a space for confrontation in the city and benefit all kinds of people around, just like a pump, It brings green and hope to the city.