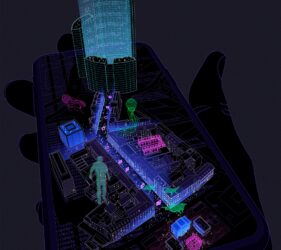 Monuments act as a symbol of their time and they have transformed greatly throughout history, especially in contemporary times with new socioeconomic issues developing at an exponential rate. A modern monument must, at its core, represent modern social issues and educate the general population and not just local citizens. For a piece of art, a monument or a social campaign to have a noticeable effect, it needs to take into account the new era of social media. The pilot project of the Extended City has been placed in a particularly important site in Milan, where modern and old-fashioned traditions collide, the Porta Garibaldi area. The potential “users” are taken on an extended reality journey, where you could experience social media as a more physical and visual entity that extends the surrounding urban scenery. Undergoing this journey would have an unpredictable effect but would raise awareness about how much social media seeps into the real world. This would be experienced through reality enhancing technologies, but to the outside naked eye hardly anything would have changed. This monument could be placed in any city in the world, because its idea is global and all-encompassing, just as contemporary social media.