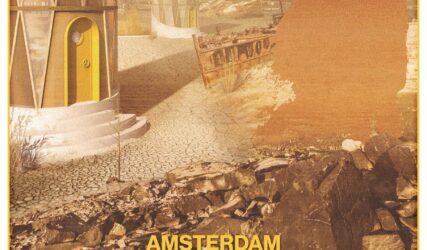 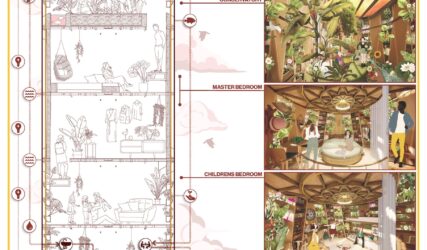 It has been 10 years since the last rains. Water no longer flows openly upon the earth. What is left of humanity clings to pockets of moisture, hidden deep within underground aquifers and drifting in on the morning fog.

Architecture has adapted to this harsh environment by becoming a tool of survival, envisioned as an enclosed metabolic cycle of water harvesting. The home has a fine mesh membrane that captures the trace amounts of moisture on the morning fog. The captured water is transmitted into a closed loop aquaponic system embedded into the entire facade. Not only does this sustain life but it immerses the inhabitants in a lush green environment, an oasis in a desiccated landscape. Providing both a physical and mental escape from the harsh climatic conditions.

Real world height and hydrology data was run through a world building program in order to generate a vision of Amsterdam without water. The disparate imagery is a stark reminder of the consequences of our current Anthropocene. The architectural proposal embraces this unique climatic and geological condition by introducing a biophilic and symbiotic relationship between man, nature and architecture. Providing a very realisable solution to what is hopefully an improbable future.