Flowing Through a Waterless World: Adaptive Settlement in Saharan Africa 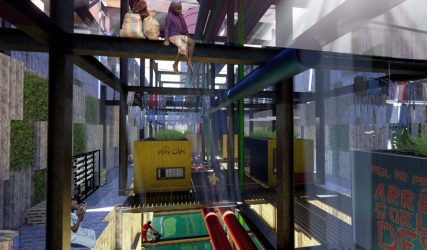 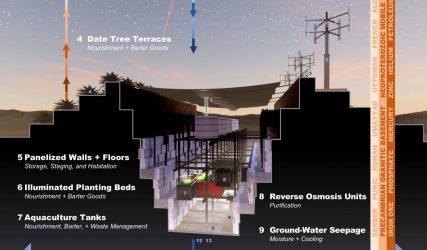 Water flows – when it is present. The lack of water “flows,” too.

Aridity reaches across established political boundaries due to climate change, topographic shift, and the inconsistent stewardship of the land’s resources. And with aridity’s surge comes the flow of other things, tangible and intangible: people, their cultures, and their manufactured detritus. Where water once flowed, we may find in its place traces of past resources, shaped (then) into things and (now) waiting reuse.

This project illustrates a community of migrants, attracted not by the promise of wealth but by the feasibility of mere subsistence. They arrive from places of worse distress, with or without water. But arrive they do, only to here and no further. Within the ruins of an abandoned ore processing facility, these migrants mine air for water, wind for power, and sun for light. In old architecture, they’ve made new architecture. In this waterless world, even a contingent community deploys design to serve its survival – and its future.