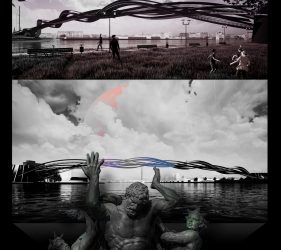 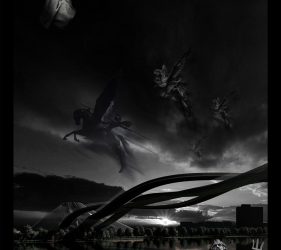 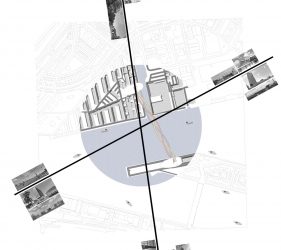 Depicting the ancient Greece, it gives the idea and concept of experiential architecture to the users. With a form inspiration of laurel wreath, which traces back to Greek mythology. Apollo is represented wearing a laurel wreath on his head, and wreaths were awarded to victors in athletic competitions, including the ancient Olympics.

We want to promote the use of bike mobility to the users and make them feel victorious for using this kind of transportation. We want them to be active in all aspects and take the experience from both environment and the structure itself.

We don’t focus solely on its idea, but also to emphasize and give the users a different experience from biking. There are four bike paths and it’s represented with different colours. The three curled paths are designated for bike lanes, while the middle path is designated for both pedestrian and bike users.

The illustrations and renders shows the process and compliment the structure by its innate state. Graphical representations tend to be intimate and personal to give emphasis on the idea given by the designers and researchers. Achieving this type of arrangement, we tend to mix the traditional and contemporary approach in designing mobility structures.

The emotional relationship of the physical movement with the human body and the bridge is of great interest to the design. The change in the attractiveness of the user will give many factors and the distinctive effects on the human body and the movement of cells for the human being. Fun like a roller coaster, but this physical change in body movement will allow the eye to perceive and interact well with the body by increasing and moving at different speeds. This will make an enjoyable view of the surroundings and regenerate cells according to gravity. Some (initial) medical studies indicate that the roller coaster contributes. In getting rid of kidney stones, this is the positive point of the bridge design and the different movement that is similar to the centrifugation