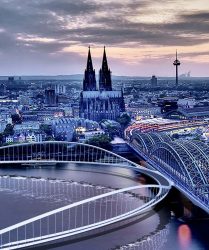 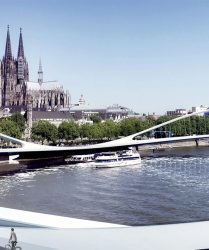 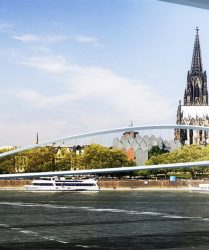 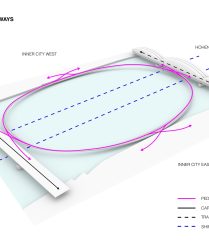 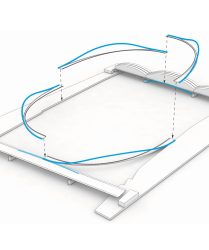 Located at the Rhine Carée, one of the most significant public urban spaces of Cologne, inbetween the two major car and train bridges, the RhineRing represents a new center as well as the link between the two halves of Cologne inner city. The circular construction serves as an attractive pedestrian walkway and cyclist route, directly accessible from the historical city center in the west, and on the opposite side in the east from the Rhine Boulevard, as well as offering access to the flanking Rhine bridges.

The perception of the river, which is of such importance to Cologne, is augmented through the RhineRing as an urban space in the inner city, highly frequented by pedestrians and cyclists. As such the circular bridge allows for a new experience of Germanys most important river. The additional urban space over the water offers great potential for cultural events, sports and leisure activities.

By bridging the two sides of the Rhine, the design takes up the central questions, which were broached with the urban development master plan for the inner city of Cologne. Hence, multiple synergies are created in particular for the urban space Rhine, the core area and the East-West connection. Moreover, the characteristic ring structure of the city gains a more identity-boosting center created by the curving pedestrian and bicycle bridge, which serves both the needs of the individual traffic and those for recreation. As such the RhineRing forms a new stage for public life in the center of Cologne.

RhineRing is a brilliantly simple and effective urban intervention with clarity and precision.