Mobility is a crucial challenge for global cities in the 21st century. The growing impact and immense risks of climate change are becoming clearer every day, and cities are on the front line. Globally, transportation generates 14% of all greenhouse gases, much of it for personal transportation.
From autonomous vehicles to mobility as a service, there has been an explosion in new technologies that will redefine how we move through cities.
This weeks newsletter will talk about Motorbikes and Scooters, Cars and larger vehicles, Railway transportation & Cable cars, and Transportation on water: boats, ferries, and smaller watercrafts.

1. WHY LITTLE VEHICLES WILL CONQUER THE CITY
Call them Little Vehicles – not just bikes and scooters, but e-bikes, velomobiles, motorized skateboards, unicycles, “hoverboards,” and other small, battery-powered low-speed not-a-cars. Nearly all of them look silly, but if cities take them seriously, they could be a really big deal for urban TRANSPORTATION.

2. WHAT HAPPENS WHEN A CITY BANS CARS FROM ITS STREETS
When we talk about the problems associated with cars and transportation, we often focus on fatal accidents, air pollution, or traffic jams. We less frequently consider how much sheer SPACE cars take up in cities. But let’s pause to give this some thought.

3. UP IN THE AIR: URBAN CABLE AND THE FUTURE OF MOBILITY
Using the “second story” of a city, urban cable has the capability to utilize areas once thought to be UNSERVICEABLE. Until now, fast-growing cities were limited to high-cost, infrastructure-heavy alternatives like subways or light rail.

4. THREE CITIES EXPLORE WATER-BASED TRANSPORT TO IMPROVE URBAN MOBILITY
Rapidly developing cities worldwide, while diverse, have a number of factors in common. Issues that seem nearly universal are congestion and enormous traffic jams, which have, in some extreme cases, stretched the typical commute into a weeklong sojourn. While cities have taken great strides to address these issues, some have decided to rock the boat by leaving crowded urban roadways for more open avenues on the WATER.

5. HONDA BAIKU IS A ONE-WHEELED VEHICLE ENVISIONING THE FUTURE OF TRANSPORTATION

Honda baiku is a futuristic vehicle CONCEPT that gives us a taste of transportation’s next step. envisioned by valencia-based designer nacho alfonso, the one-wheeled motorcycle explores the new electric mobility that has become popular in the last years, where electric vehicles — scooters or skates, occupy the streets of many cities around the world.

To reduce their carbon footprint and increase MOBILITY options, many cities have been investing in bike-share systems. One of the largest is Paris’s Velib’, with more than 14,000 bicycles. Launched in 2007, the system is built around docks – it’s there that customers pick up and drop off bikes, and they also serve as recharging stations for electric models.

7. HOW CAN CITIES INCREASE THE SAFETY OF LARGE VEHICLES IN URBAN AREAS

Large vehicle traffic is a common sight on city streets. From waste disposal and utility trucks to delivery vans and buses, these large vehicles make up a small fraction of VEHICLES on urban streets, but they are disproportionately involved in fatal crashes, particularly involving people walking and riding bicycles.

8. THE CABLE CAR AS A MOBILITY SOLUTION

Common in ski resorts for more than a century, cable car technology is ideal for coping with steep gradients over both short and long distances. High above the landscape, eco-friendly gondolas glide autonomously and almost silently from A to B, which is why they have become firmly established in the TRANSPORT systems of some cities in recent years.

Once regarded as little more than a tourist attraction or transit mode for skiers, cable cars are increasingly conquering urban MOBILITY. The idea is appealing: Instead of being stuck in traffic, simply hover over it. But how and where are urban cable cars suitable for public transport?

WATERWAYS are an untapped source of mobility for city dwellers. Eight out of the 10 largest cities in the world are coastal – and a majority of large, non-coastal cities are riverside. Yet public transportation in and around these urban centres is predominantly land-based. 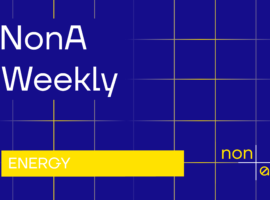 NonA Weekly: IT'S ALL ABOUT NUCLEAR ☢️

NonA Weekly: CHANGE TO BE 🙌