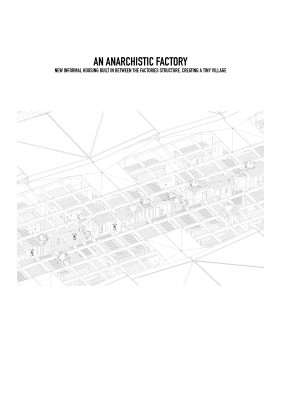 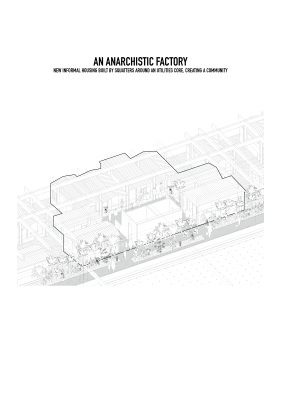 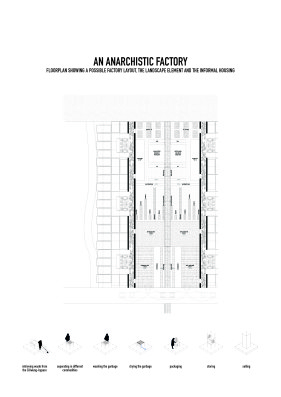 AN ALTERNATIVE FOR JAKARTA’S ILLEGAL SQUATTERS

An Anarchistic Factory is an alternative for plain social housing which formalizes the low-skilled, in-formal, in-efficient jobs that squatters are doing now; recycling waste. It proposes to bypass Jakarta’s Ciliwung river at certain points and build a simple structure that takes in the heavily polluted riverwater.

In this structure, a factory floor will be build. The factory floor serves a modular system that drastically improves working conditions, speed and efficiency of all the recycling steps in the entire process.

A low-tech factory based on an assembly line is created.

The low-tech factory floor is based on a 875×875 grid. The factory is based upon this modular system of floor elements, each having a different infill according to the specific task of the recycling-process. The infills can be removed easily and placed elsewhere in the factory, making the factory floor very flexible for future situations.

Two thick concrete walls, filled with vegetation, creates a landscape-zone that separates working from living. Sometimes the landscape element, separating living and working, breaks out of the walls and creates a block which houses basic sanitation and a kitchen.

The columns and beams can be used as a construction for the houses and can easily be filled in with scaffolding or waste that is found during working hours.

The community goes back to the Indonesian ‘kampung’ idea that every function has its own place, instead of being scattered over the community. This idea allows to make improvements on basic sanitation and access to gas and electricity cost-efficient. A kitchen per community, not per household.