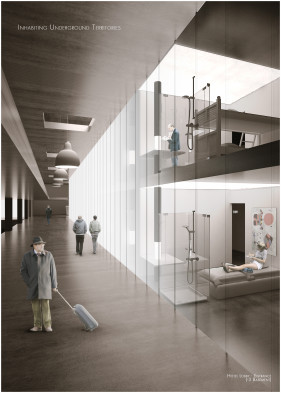 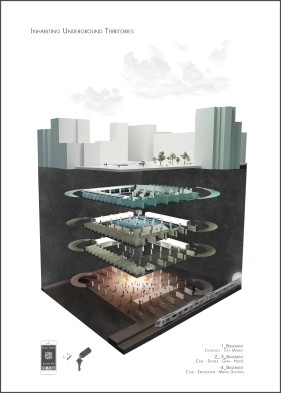 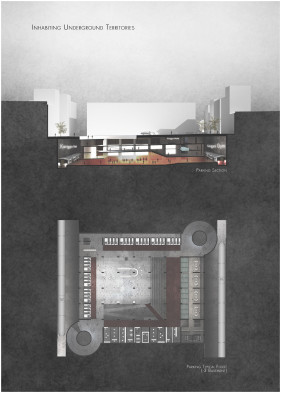 The ambition of this project is to exploit a common latent potential of the contemporary metropolis: that, which is hidden beneath its surface in the form of underground parking lots. Athens, the Greek capital, presented as a case study, provides a remarkable amount of such spaces, rendered redundant by the economic crisis. At the same time, a forthcoming change of their ownership policy, handed to the state, as long as several ecologic and urban planning theories that appear keen on leaving the car outside the metropolitan borders, pose a critical argument regarding the management of about 12.000 square meters of former parking space per lot. Subsequently, a reuse issue emerges which eventually ends up as a design subject, a problem expected to rise up as a main architectural preoccupation of the 21st century.

Our proposal regards the rehabilitation of those forgotten mega-structures across the metropolis of Athens. On the notion of the mixing of functions, organized throughout their underground levels, our design examines the creation of an uncanny type of “minimum-existence” accommodation network across the city center. One of the biggest centrally located underground parking lots of the city, which will be used as our example, is found beneath Kaniggos square, part of the larger district of Omonoia. Considering that, accommodation could operate as a “life-supplier” for other uses and vice-versa, we propose an L-shaped mass of accommodation spaces, spanning through the second and third basement and occupying one of the building’s boundaries. This “inhabited” mass surrounds the public, multi-functional core of the building. The use of accommodation co-exists with a night club and a metro station both located at the bottom (forth underground level). As the metro passenger, the night clubber and the sleep-over rise towards the city surface, they come across an underground public space surrounded by stores and a gym on the third and second basements, whereas all the former are topped by a large flea market situated just beneath the city level (first basement). The proposed blend of uses questions the basic needs of a typical hotel, as its visitors may either appear as “leftovers” of a rough party night, city flaneurs in need of a cheap night’s sleep or wanderers of this mega-structure. In this hotel the usually appointed time of sleep becomes an irrelevant issue: under the city it’s always dark. The only clue of time passing is the “coming and going” of the metro carriages and the limited amount of natural light penetrating the slabs until it reaches the third basement.

The hotel visitors get to choose between three room typologies, spread through the double storey L shape (5m width) mass: the single bed, the single bunk bed and the double bed room, all accompanied with a small bathroom. All rooms come at a depth of 3.5meters and a width varying from 1.5 to 2.3meters, thus underlying the meaning of the low-need hotel which celebrates the only thing that is left to do between intense metropolitan activities: rest.
Luxury is not an issue.