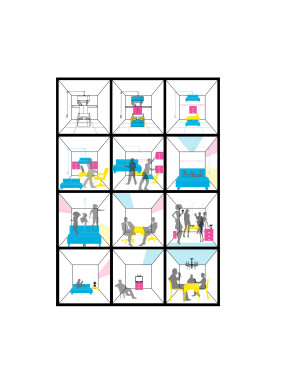 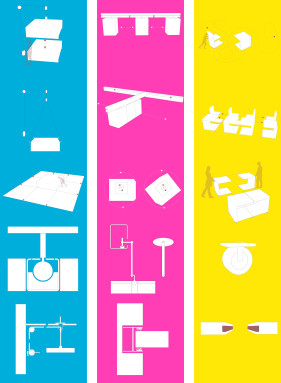 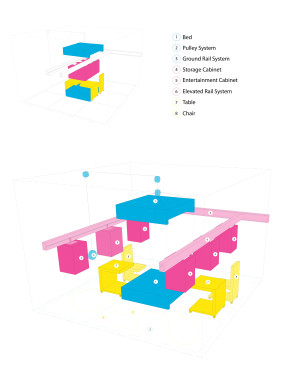 the room that you rule

Monarch is a transformable module consisting of furniture found in typical hotel rooms. Beds, storage, tables and chairs, entertainment and kitchenette components are fitted together in a mass. The furniture is on a series of systems including sliding tracks, pulleys and wheels, so that the inhabitant can arrange the room with the pieces they need and put away unused pieces.

Today’s hotel rooms tend to be static places equipped to accommodate a variety of necessary functions for travelers: eating, working, entertainment, in addition to sleeping. By forcing all functions into a single space, hotel rooms are left feeling impersonal and cramped. Hotels also have to provide options for various sleeping arrangements, resulting in a certain number of rooms with either one or two beds, and suites with more furniture. In attempting to be universal, typical hotel rooms frequently fail to adapt to the individual user. Often a single person ends up sleeping in a room with two queen size beds, for example. Visitors often have to “make do” with room type availability.

The Monarch system addresses these issues by allowing the user to modify the objects and space within the room to meet individual desires for use and comfort that expand beyond traditional options. For example, children can split the twin beds to create bunk beds, or fill the floor with beds to jump on. A single person who prefers a very dark sleeping space can select a single bed and push the others against the windows to block light. Sleepwalkers can sandwich themselves between two beds to be safely assured they will wake up in the same place they went to sleep. If one is not sleeping, they can push the beds to the walls so that the entire room is available for working, eating or entertainment.

Monarch modules can be installed in an existing hotel room, or can become a feature offered in new construction. As such it does not require new architectural forms, nor new furniture products. Instead this system provides a way for people to impact the interaction between themselves, objects and buildings. Monarch has custom design capabilities where guests mold their own hotel space to better accommodate their particular tasks and habits.