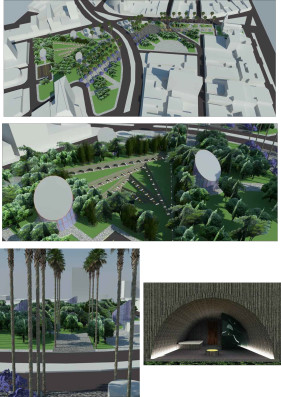 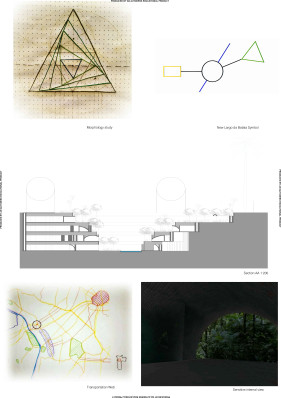 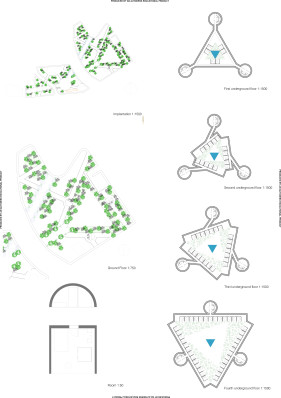 The MORPHOS concept is simple: give the guest an experience of peace, in which he is only by himself with nature, even at the nervous core of a city. How? Going down at the core. Three entrances takes the guest to four floors, where the rooms are the last limit of city. Once you’re in, you’re connected with nature only. Brazilian native species and thorn bushes compose the dense landscape vegetation, protecting the rooms from strangers curiosity, and keeping the security without needing walls or parapets.

At the core of an intersection of subway, bus lines and avenues net, the MORPHOS Hotel provides a moment of tranquility, an extra-urban experience for the person who needs to disconnect from the metropolis speed.

The site is an historical square called Largo da Batata, which was an important place in São Paulo developing, used by the Bandeirantes – the brazilian empire religious explorers – as the last place to rest on the sea route. Anything but the ancient Jesuit church, founded by the priest José de Anchieta, represents what Largo da Batata was, so we intended not just to protect, but to revival your importance in this place.

At the extreme west we have the church, the square past, at the extreme east we have our hotel, the square’s future, at the northeast we can see the Cardeal Arcoverde Street, an important route of the developing of the São Paulo west side. That way we have the axis of the past, the axis of the future and the axis of the constant city growth. At the axis intersection we have the new core of the square, from where you can see huge imperial palms corridors throwing spotlights to these historical importance monuments – an old church, a constant axis of growth and the future vision for hotels. Three spaces, triangle.

Next to Largo da Batata is one of the brazilian economical engines, the Faria Lima avenue, full of workers, dealers and clients, who can rest at MORPHOS Hotel before an important deal, or even after a day of hard work.

The place for sleeping:

The room is composed by modules of pre-fab concrete arch, the better solution for support the huge weight of the soil and trees above. There’s no closing between nature and the guest, just the visual limit of the room’s floor. The bed is bigger than the average and the room darker, the best settings for comfort.

An experience of solitude

The guest is by himself, just listening the leaves moving, the raindrops falling smoothly. There is no more than the necessary to rest, a bed, a shower, a sanitary, and the fireplace to keep the room heat. Like a monk in your own cave.

The singular stay is an Hotel rule, one person per room.  As lower the floor is, more time the stay is, like sleep layers of deep.

There’s nothing more necessary to rest than a bed, silence and meal.