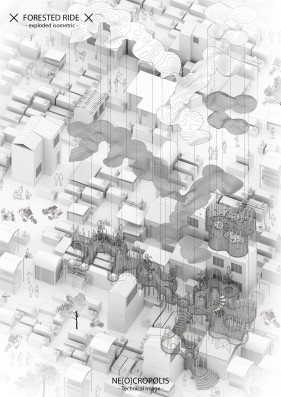 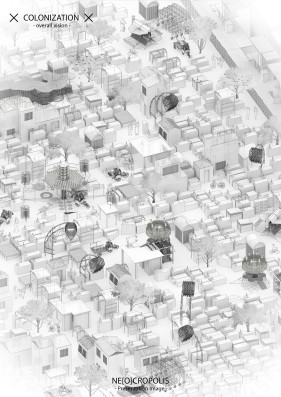 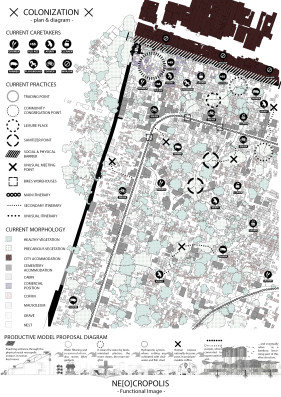 How a Cemetery Can Become An Habitable Productive System

The project starts with the intention to integrate in the Manila North Cemetery the funeral technology of “re-composting”. Thus, it is a populated cemetery with a 2000  inhabitants microcosm whom are called Caretakers; and the technology aims to convert the corpses into super-nutritive soil, instead to sterile ash like incineration does.

How can “re-composting” be integrated into the cemetery? Through an habitable productive system. It is composed of 6 architectures: the green wall, the dron pavilion, the plaktiniscence, the hydroponic, the necroshelter and the forested ride; furthermore, the system has the drones, which are bike-carts that can be customized according to the function to perform. The system is adjusted to the usual practices of the caretakers, clears water through bioluminescence and “relives” the deceased as an alive vegetal; finally, this vegetal become a member of the forested ride structure. The forested ride height grows as the vegetal grows and widespread as more deaths occurred, conquering organically the cemetery; and, like the forested ride, the other 5 architectures have their own specific function in the productive system.

So, this is an habitable productive system which colonize the old necropolis, the NE[O]CROPOLIS.