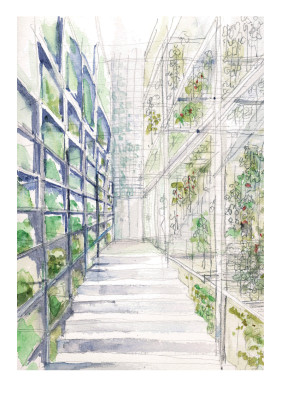 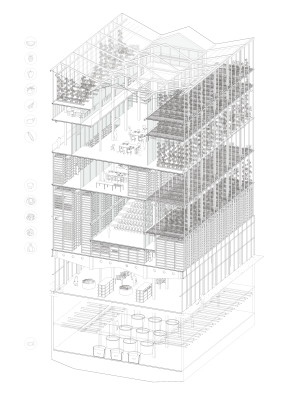 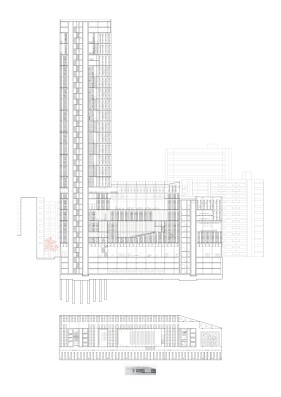 A symbiosis of factory, green space and public

By combing architecture and hydroponics, the project, located in the heart of one of the densest cities in the world, Tokyo, shows a strategy for the problem of disappearing green space and agriculture land in metropolitan areas.

The design takes the hydroponic technology of soilless cultivation of plants as a starting point to create a new idea of vertical inner city green space in a symbiosis of factory and public space.

Therefore the space program contains spaces for production and research, which cover the demand of hydroponically producible fruits and vegetables in a 750 m radius for approximate 30,000 people. Making this still quite unknown technology visible and perceptible, spaces for the public are integrated in this production system. A public circulation leads through the building always in visual relation with the production:

The information, the auditorium, the exhibition of the technology, the common hall for neighbours and groups for learning the technique, rentable cultivation areas and the canteen as a meeting point between staff and visitor.

Through the work of people the building becomes a machine unifying all production processes from cultivation to harvest until to packing situated on different floors as well as a new form of greenery.