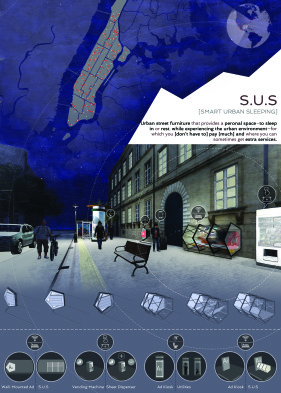 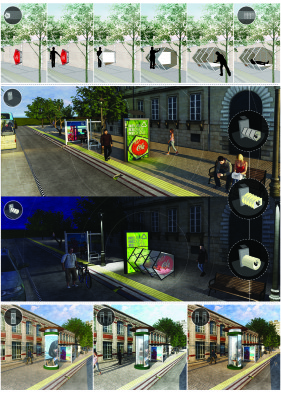 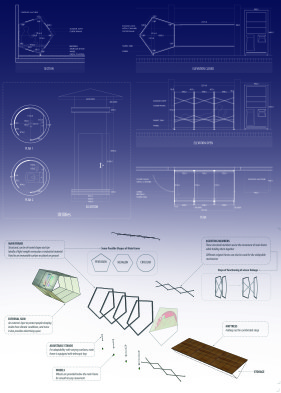 Moving beyond the limits of conventional definition of a hotel and its building typology, S.U.S. offers an alternative approach in form of urban street furniture that provides a personal space – to sleep in or rest, while experiencing the urban environment – for which you [don’t have to] pay [much] and where you can sometimes get extra services.

S.U.S. envisages an urban street furniture network in cities rather than being a single consolidated construction. Its main component is a sleeping pod, which reinterprets the concept of sleeping in a hotel bed, and is intended for use by visitors and locals. Inspired by collapsible origami forms as well as Autobots (from “Transformers”) that blend into the urban context, altering into multiple shapes whenever required, the unobtrusive pod occupies a minimal area. It can therefore be easily placed at multiple locations within interstitial spaces in existing urban streetscapes.

Personal Space – to sleep in or rest, while experiencing the urban environment

Spread over different parts of the cities – like public plazas or sidewalks – S.U.S.’s global network offers individual clients the possibility of choosing – based on the preferred geographic location and urban setting of the pod as well as its envisaged “renting” period and corresponding availability – their compact personal space to suit different sleeping/resting needs. The guest – a visitor or a local ‐ can thus use the pod just for sleeping or simply resting while experiencing – as an “invisible” spectator – the surrounding urban environment over multiple days or at certain time(s) of the day, as applicable.

The S.U.S. pod module can be transformed into a temporary shelter and returned to its compact original form within just a few seconds, requiring minimum human assistance. Its collapsible structure can be made from locally available lightweight vernacular or industrial material. The external skin of the pod will be designed to be weather and sound proof. In addition, to ensure hygiene, all surfaces of the pod will be washable.

Another unique feature of the pod is its modifiable design that can easily adapt to varying geographic locations as well as weather conditions as per requirement. Pods that cannot be attached to a stable surface are equipped with adjustable telescopic legs – to alter the height and level of bed – and wheels.

“Rentable” through a Wi‐Fi‐linked free smart app, the S.U.S. urban street furniture provides storage space and doubles up as advertisement space that blends with the surrounding public realm, thus contributing to its economic and aesthetic viability.

The network also utilises existing wall‐mounted and standalone advertising posts/kiosks for fixing the pods as well as integrating utilities – such as toilets and showers – as well as refreshment vending machine into bedding dispenser and mini bars. As a result, the extra services sometimes offered by hotels are also available for the S.U.S. clients, albeit at minimum or no cost – for these services can continue to be run by the same infrastructure providers already maintaining outdoor advertisements and street furniture.