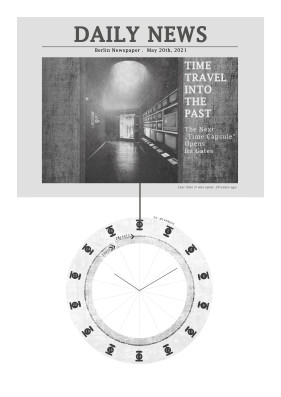 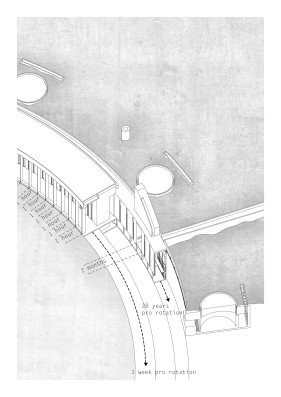 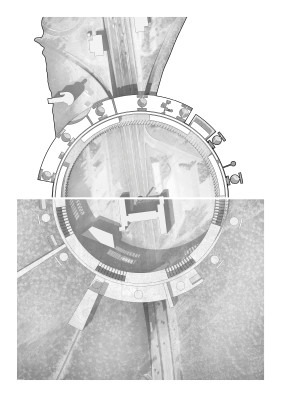 TEAM: Samuel Schubert (Nationality: German, University: Bauhaus-Universität Weimar),
Philipp Seitz (Nationality: German, University: Bauhaus-Universität Weimar)
“Berlin, 2020: Another time capsule opens its gates and reveals an abandoned exhibition”, a
possible title for a future newspaper article related to the project. The idea is quite simple: A
building that functions like an eternal architectural clockwork and permanently rotates.
We chose the abandoned former border to West-Berlin as a suitable site location. The
building consists of three rings: an outer ring with fixed underground rooms and two inner
architectural rings that are constantly rotating in the same direction with different speeds.
Very slowly – The middle ring takes 28 years (the time of existence of the GDR wall) for one
whole rotation; the inner one only needs one week.
Every two years, the openings in each ring happen to overlap, so that one room at a time can
be entered for a few months and after that will be closed again for another 28 years. These
rooms work as walkable time capsule-museums. It`s all about the moment when it opens
and people can encounter a different time layer in an exhibition that had been installed
almost three centuries ago and was abandoned and its content unknown until then. Before
it closes again, an exhibition will be set up for the next time it opens.