Convent of Capuchos reinvented: the perception of time in architectural and urban rehabilitation

The intervention we propose for the Hospital of Capuchos (former Convent of Capuchos, a capuchin monastery), located on Santana hill (Colina de Sant’Ana), Lisbon, stems from the idea that the conjugation of added-value interventions imposes itself on existing patrimonial architecture, as an identity factor of the city and support of its valuation and development. This valuation comprises a system of views, and frames the terrain contours, for the most part keeping its natural morphology and the consolidated image of the Santana hill by working with the existing platform levels. We consider this site to be a crucial point of the views system (‘to see and to be seen’), potentiating the valuing of the old convent building, liberating it from the disfigured surrounding buildings, returning amplitude to the space and allowing for a view over the whole city, its hills and valleys, and the estuary of river Tejo. This objective is realised through the demolition of most of the recent buildings (hospital wings added in the 20th century which do not possess any relevant architectural feature worth preserving), reintegrating the old convent building and letting it breathe. Thus, the convent grounds are returned to the city, with a vast green area with public and private equipments, turning it in a public space of excellence, capable of reintegrating old convent structures not properly valued until then and with strong affirmative capabilities in the city.

The main part of the intervention was based on the concept of ‘acropolis’: a large platform which functions as a stage, where the main building rests and is highlighted at an urban scale, emphasising its presence on the hill and functioning as the building’s stylobate. This concept also applies to the vast green area which surrounds this ‘living platform’, reliving the original image of the old convent grounds, with its imposing convent as central figure, surrounded by gardens and fruit trees which assured self-sufficiency, recreating a large tree area on the slope of the hill and appearing after other easily recognised city-wide structures (Castle of Saint George, Convent of Graça, Torel Garden). Functioning as a ring that binds the new and the old structure, it will allow it to be free of the surroundings and give it emphasis, reinforcing the ‘see and be seen’ system and returning an urban leading role to this space, privileged in its location, centrality and view systems, but forgotten over time and ill-treated by the function changes it suffered.

The proposed functional use bases itself in the history of the site: continuing the theme of health and wellness, we propose a guesthouse with spa as well as other supporting public equipments (auditorium, exhibition spaces, and restaurant).

The principles followed were value-addition, conservation, modernization, and reutilisation of patrimonial architecture, in order to integrate it in the contemporary life, avoiding on the one hand the degradation of the structures and on the other hand the risks associated to its deficient use (‘museification’ and abusive commercialisation) through properly controlled accesses. This way we are able to tell the history of this building, by inserting it in the current context and giving it a new objective, preventing it from being ‘frozen’ in time.

As for tectonic, the concept which supports the creation of the proposed volumes is the working of the existing platforms as a mass, to which we add or subtract matter, thus creating public, semi-public and private spaces. This mass is kept together by a ‘belt’ that allows the perception of the limits of the platform, always present and constant in its outline, regardless of the treatment given to the mass (or the absence of mass) in its interior. This approach allows us to create a strong contrast between its horizontality and the idea of fragmentation conveyed by the patios and little volumes that appear extruded and facilitate the relationship of scales between the project and its surroundings. 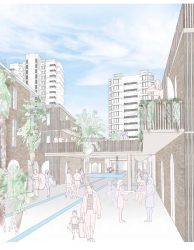 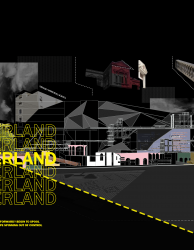