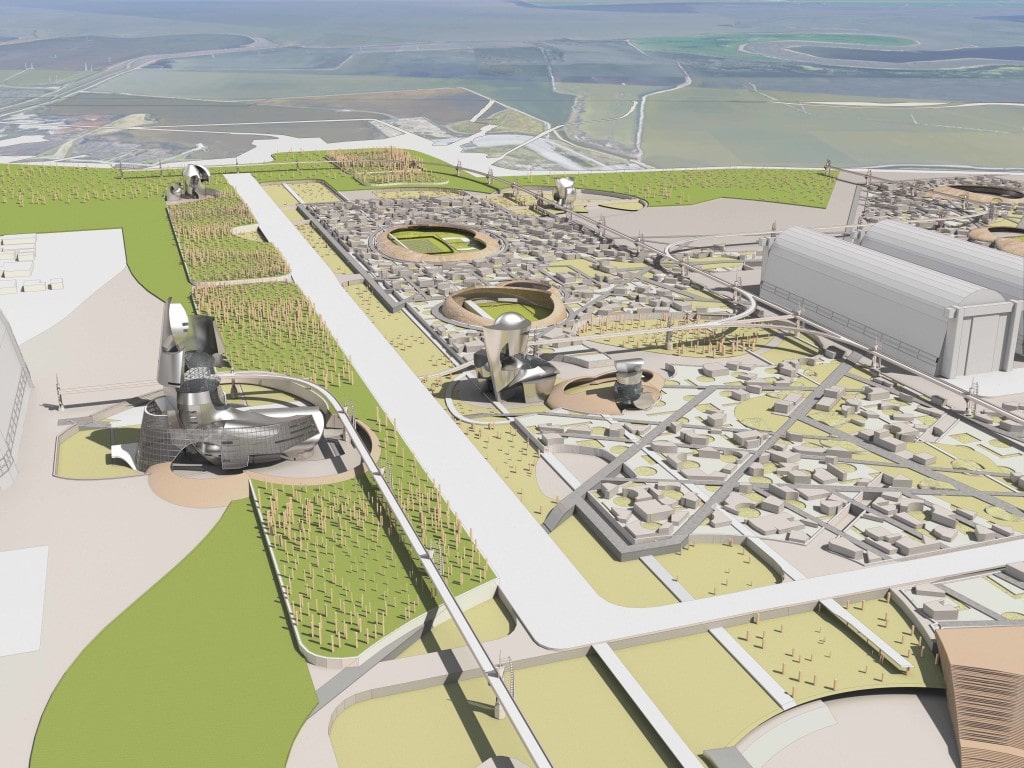 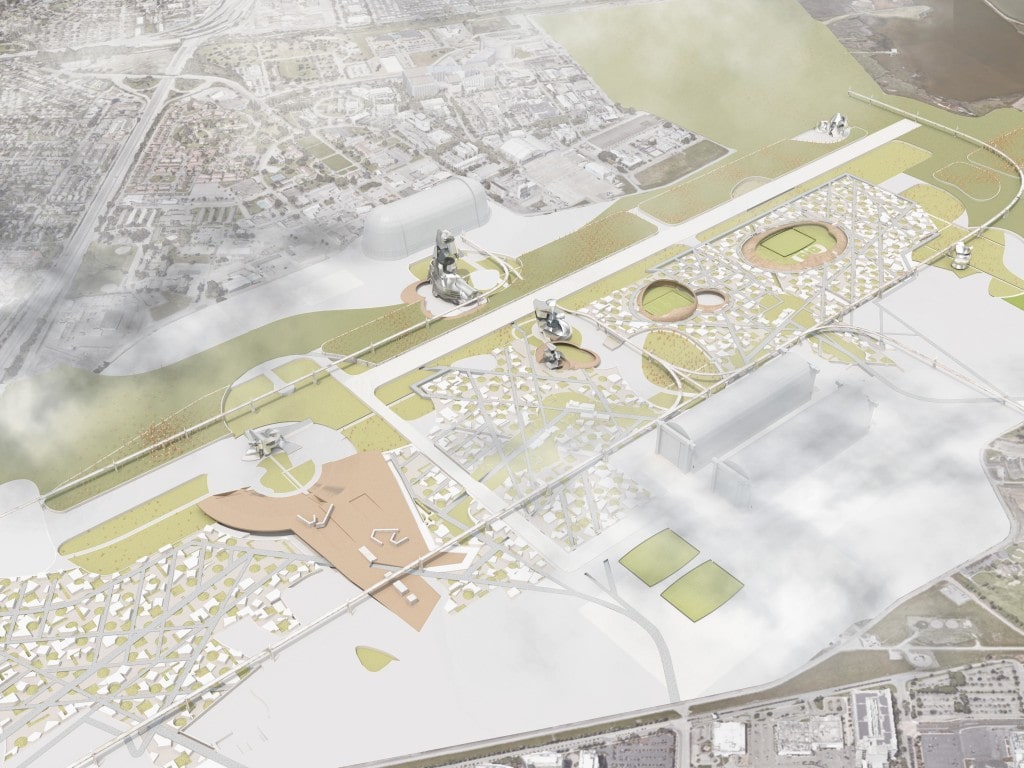 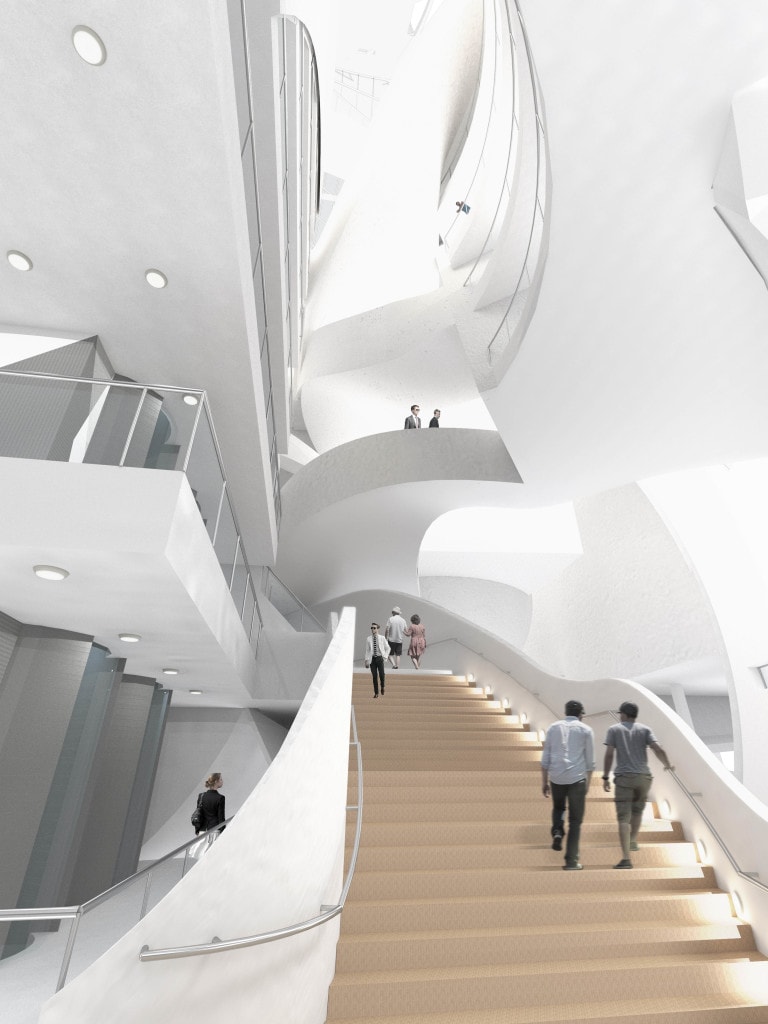 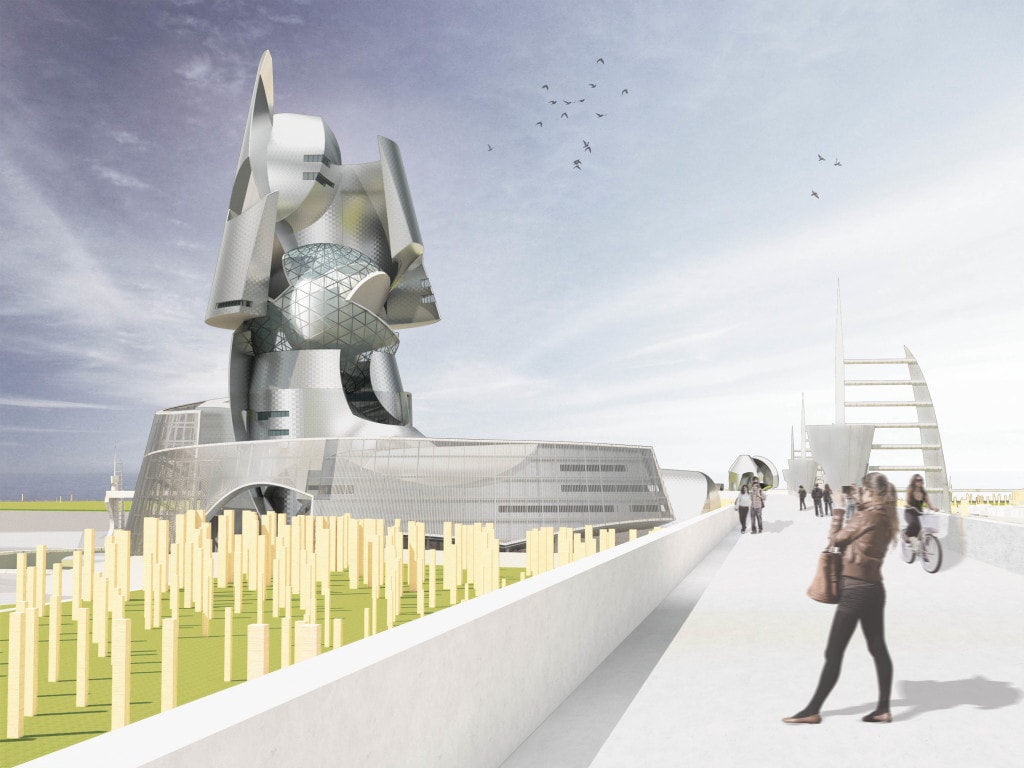 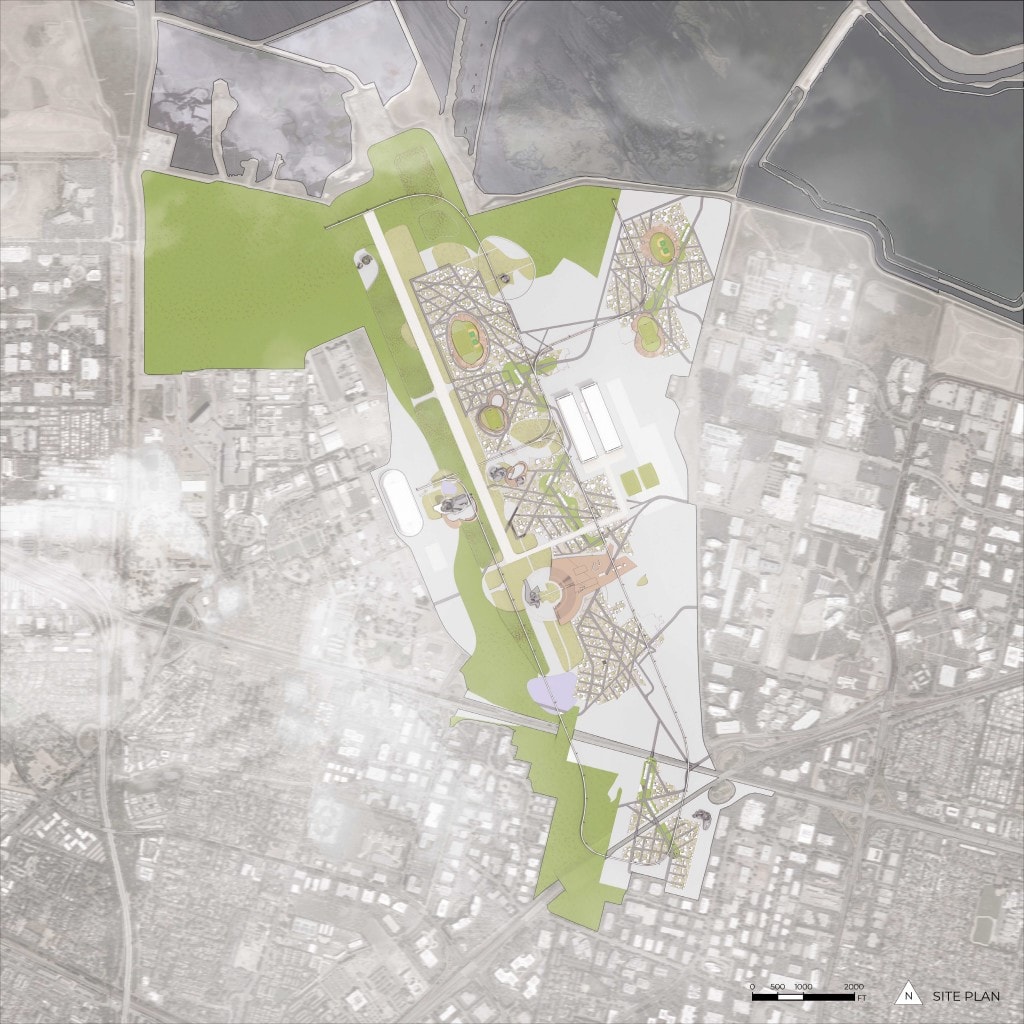 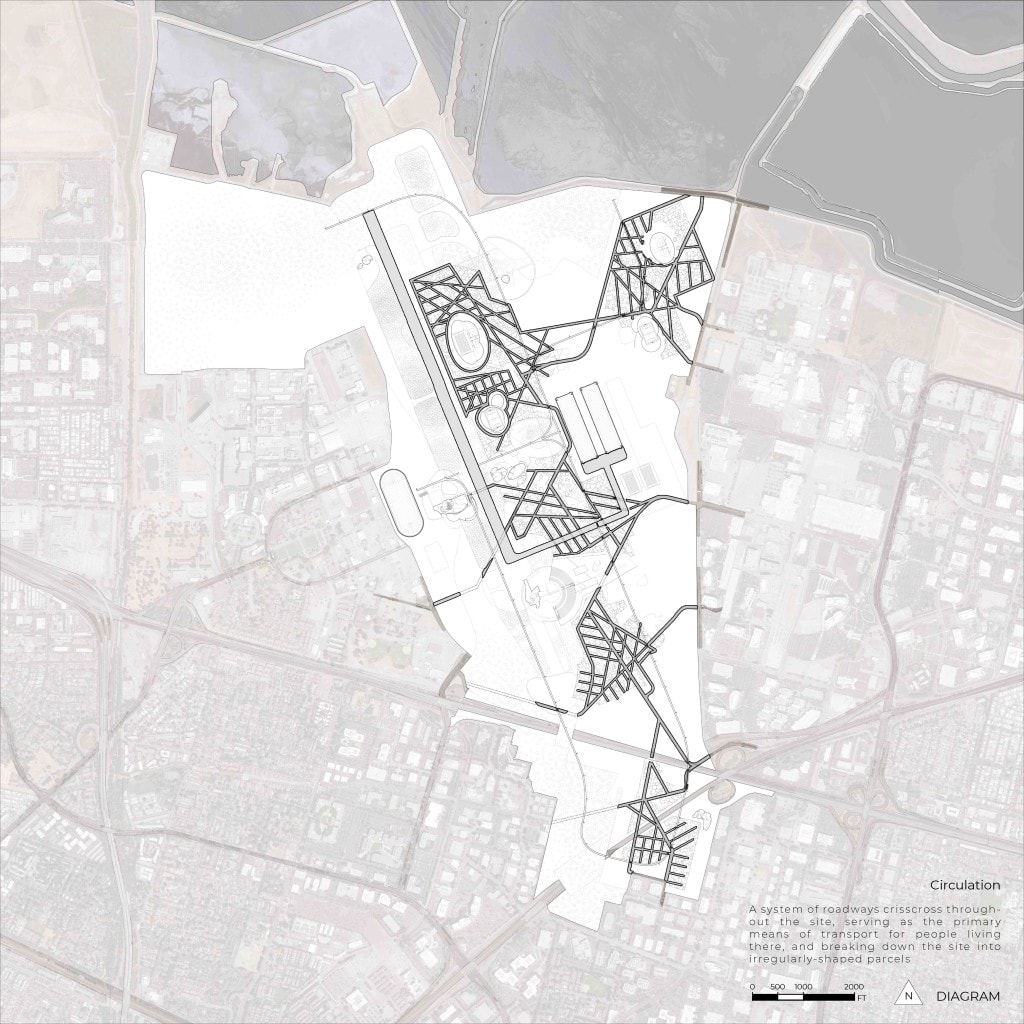 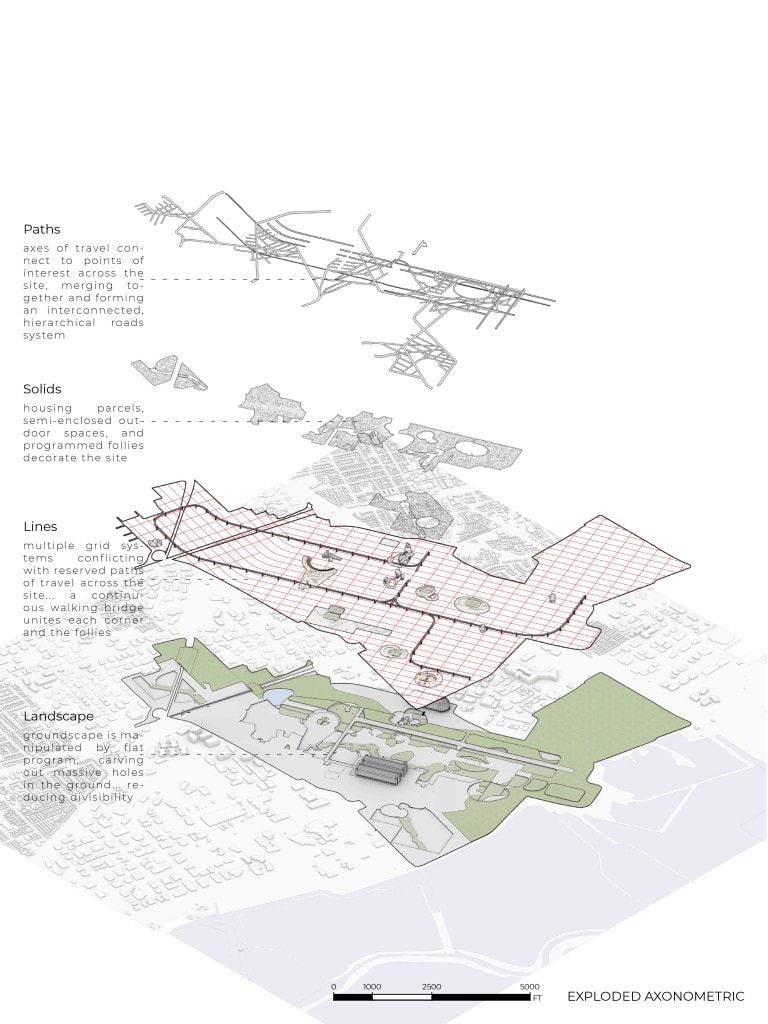 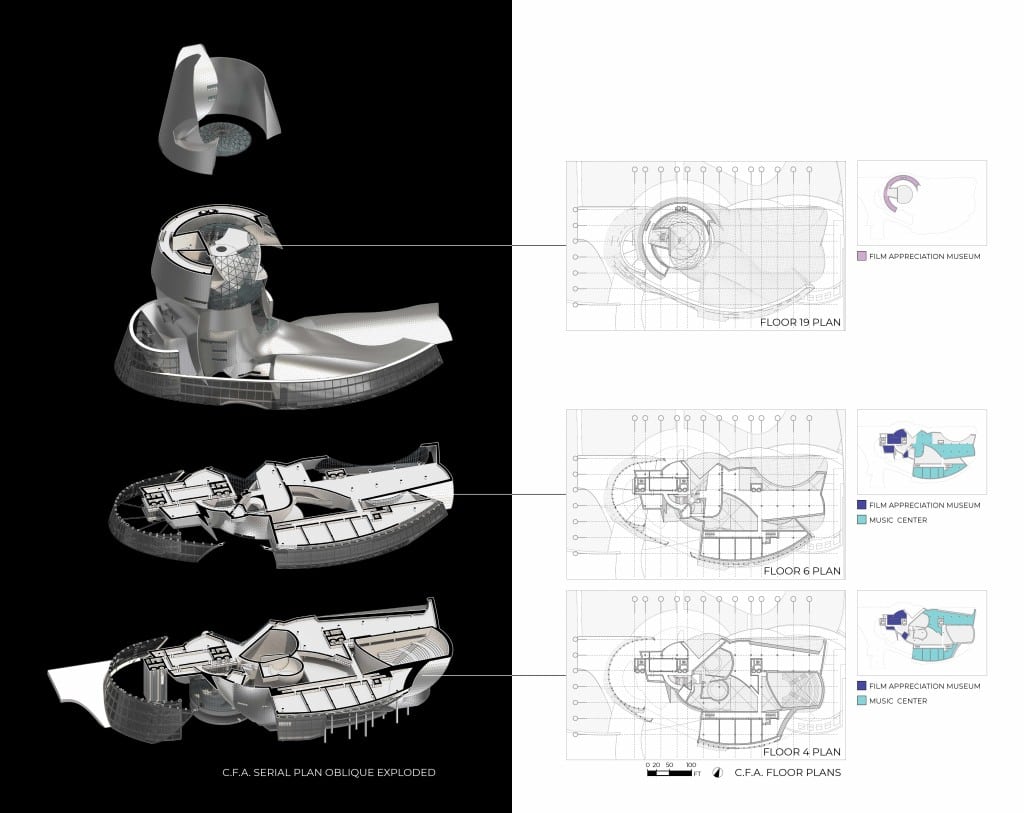 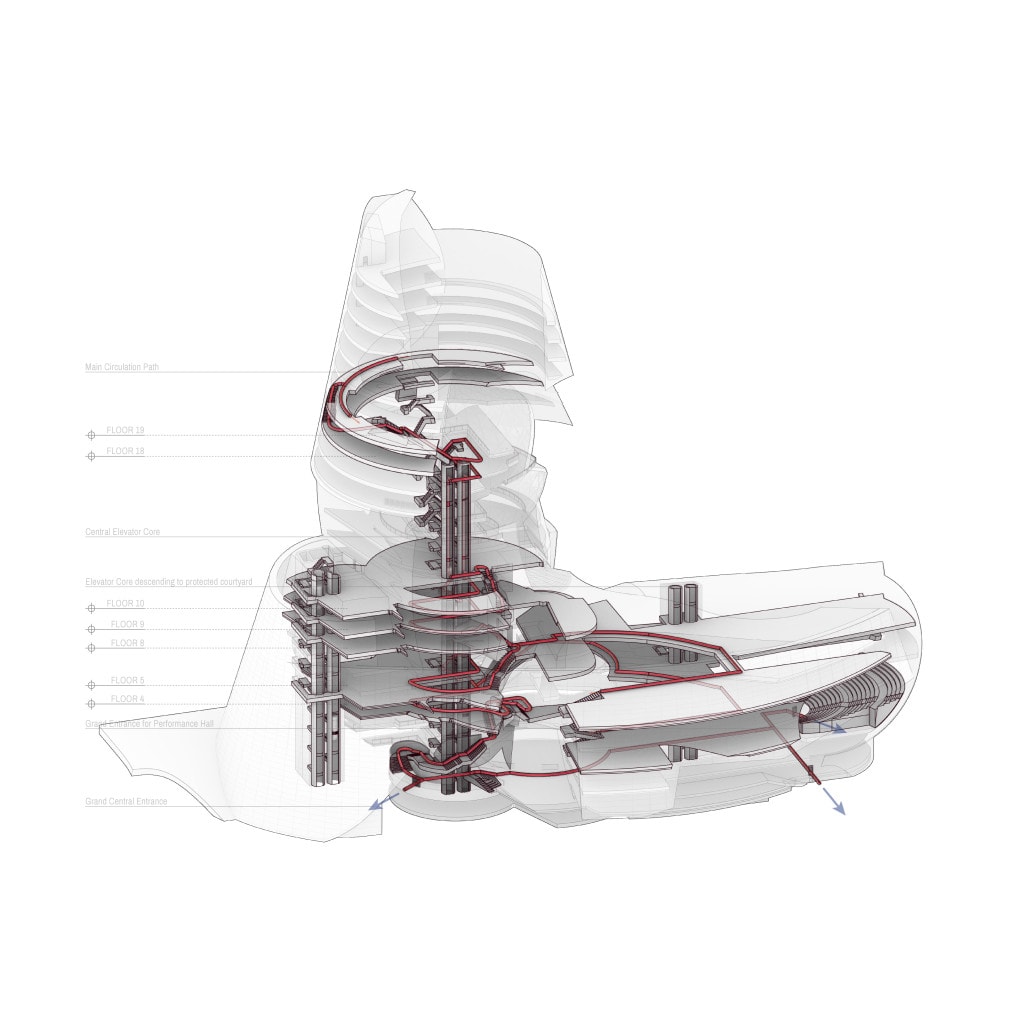 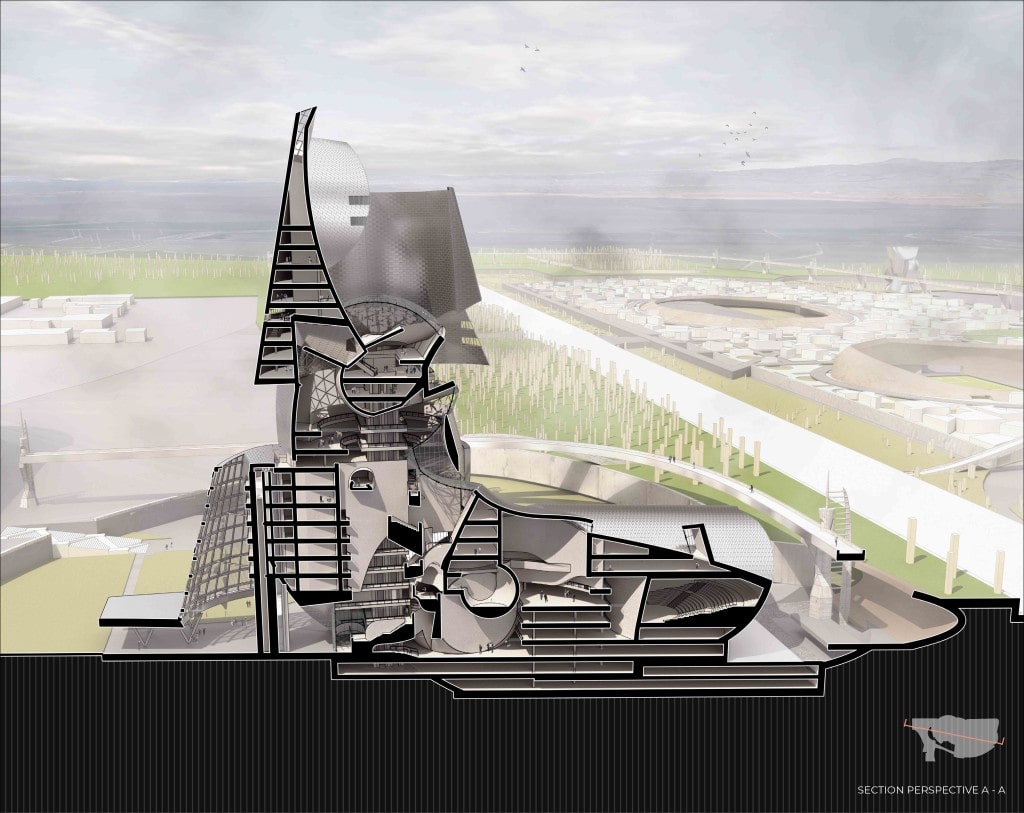 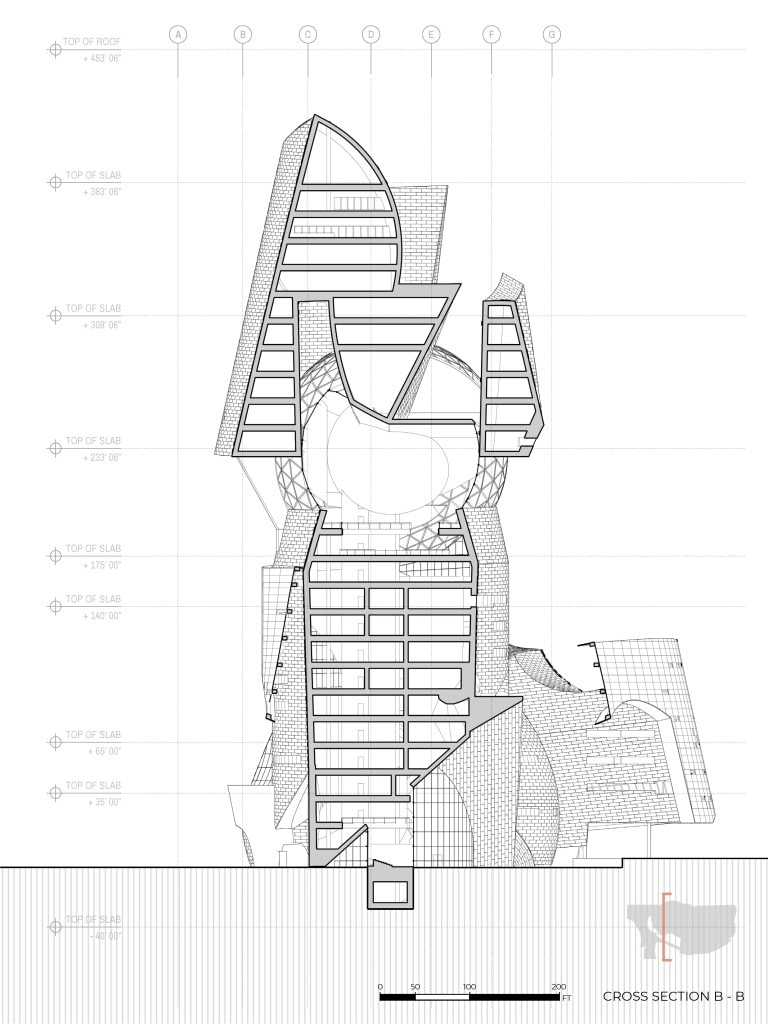 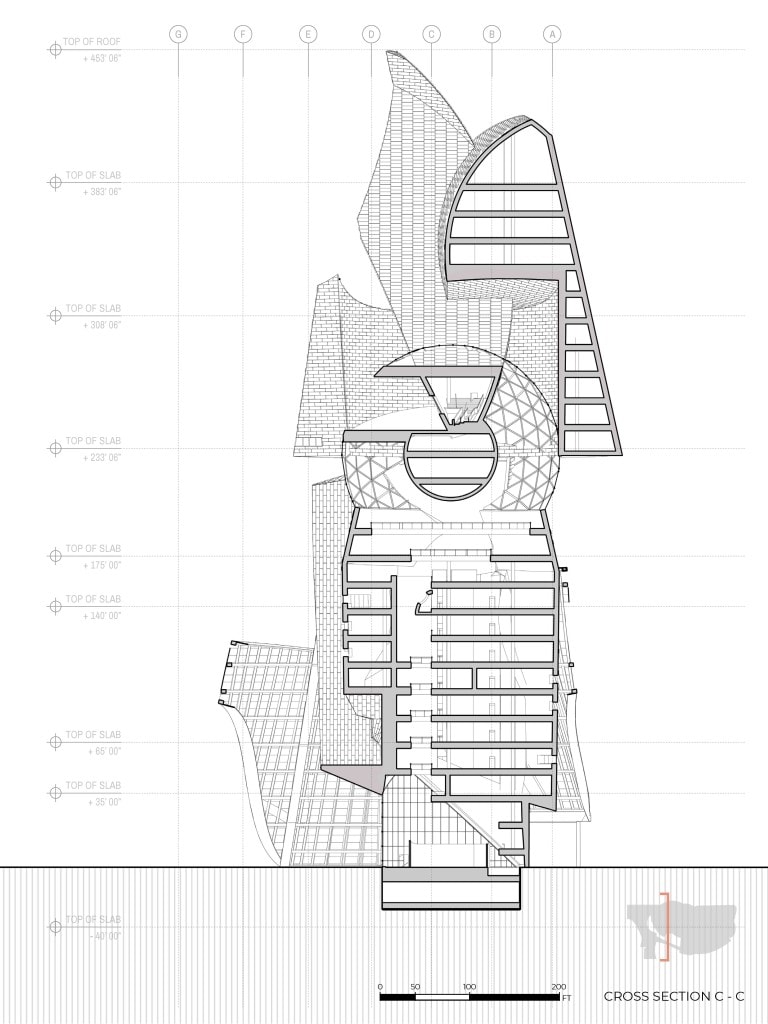 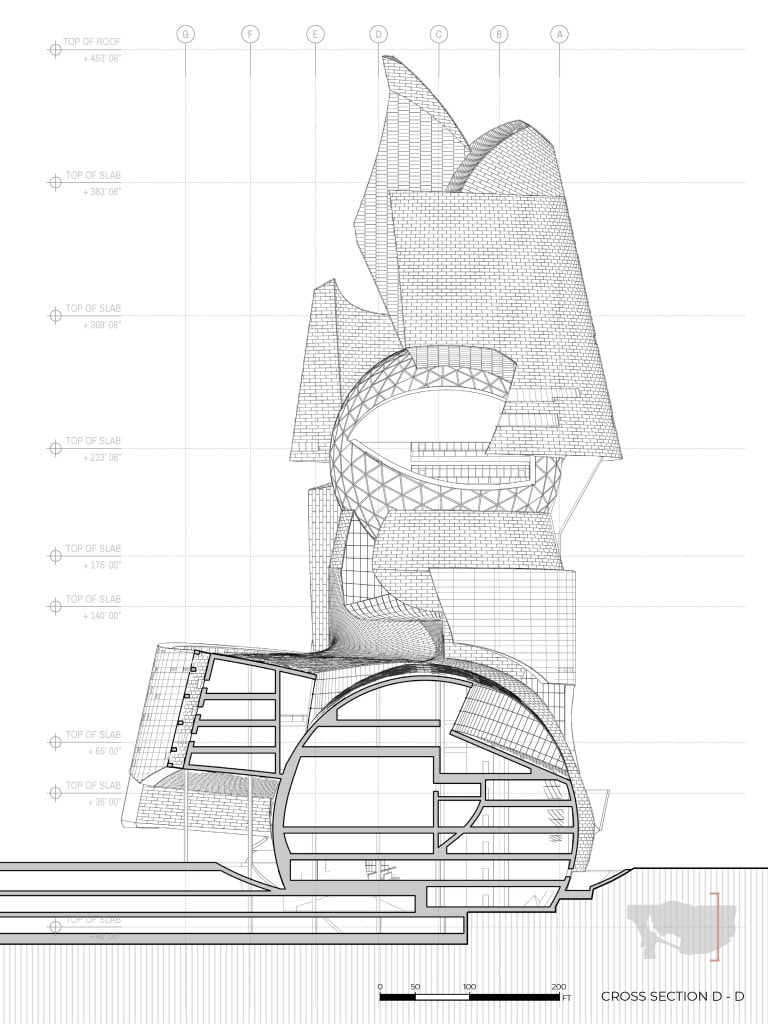 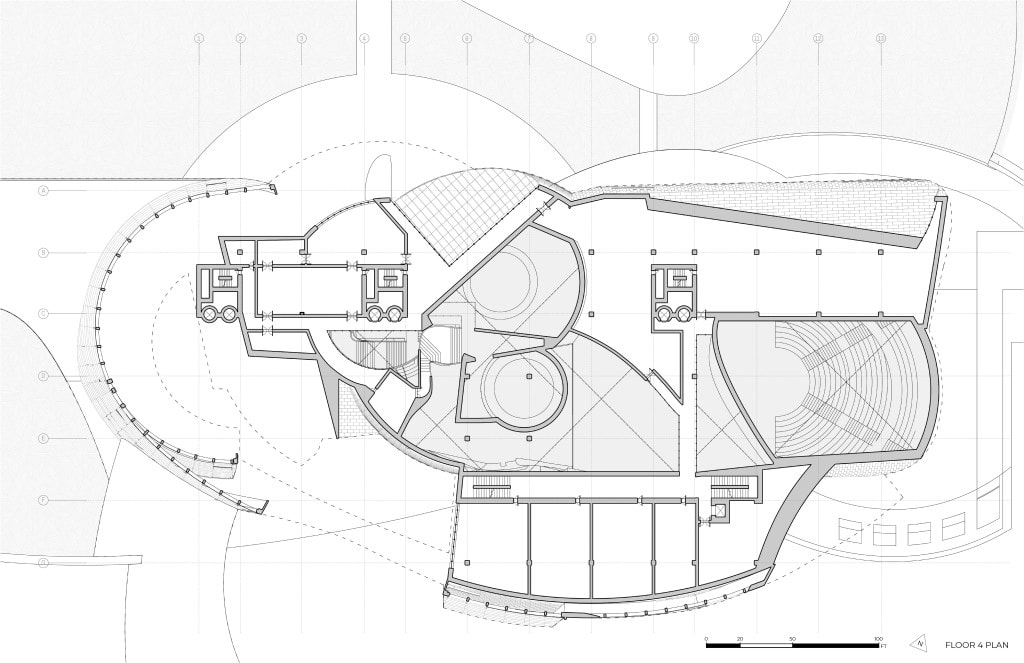 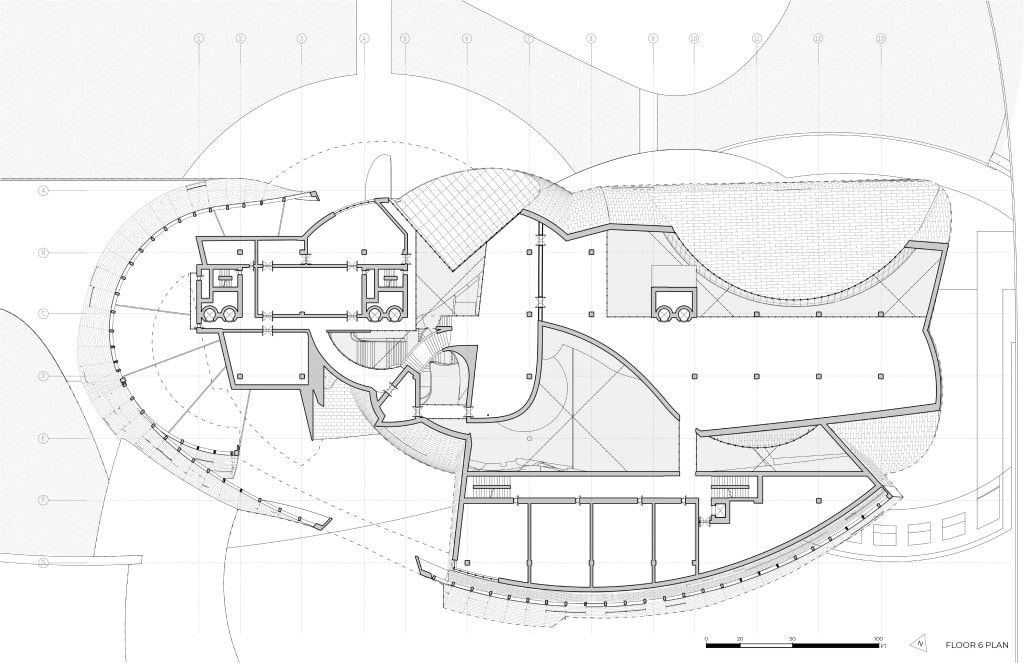 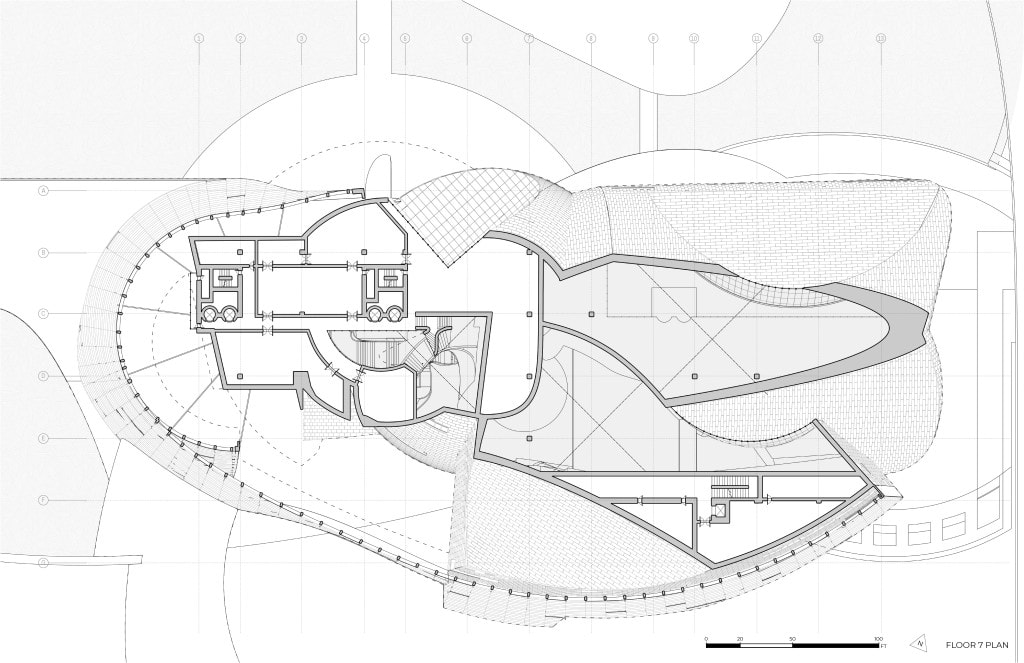 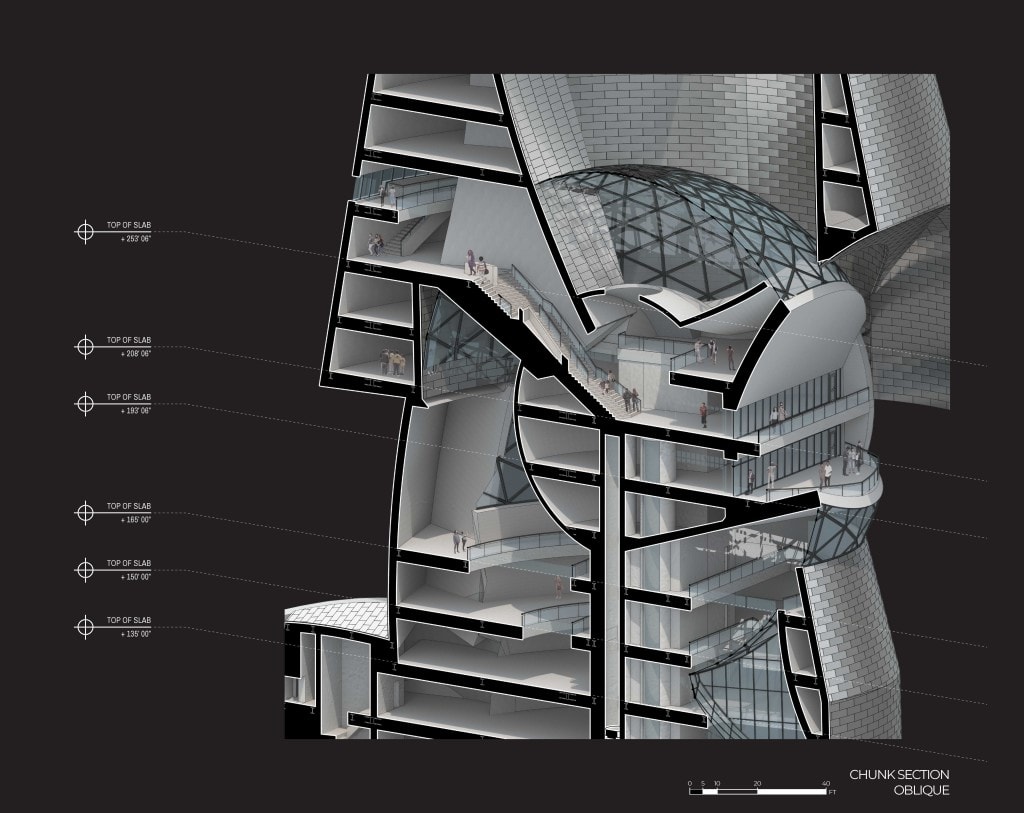 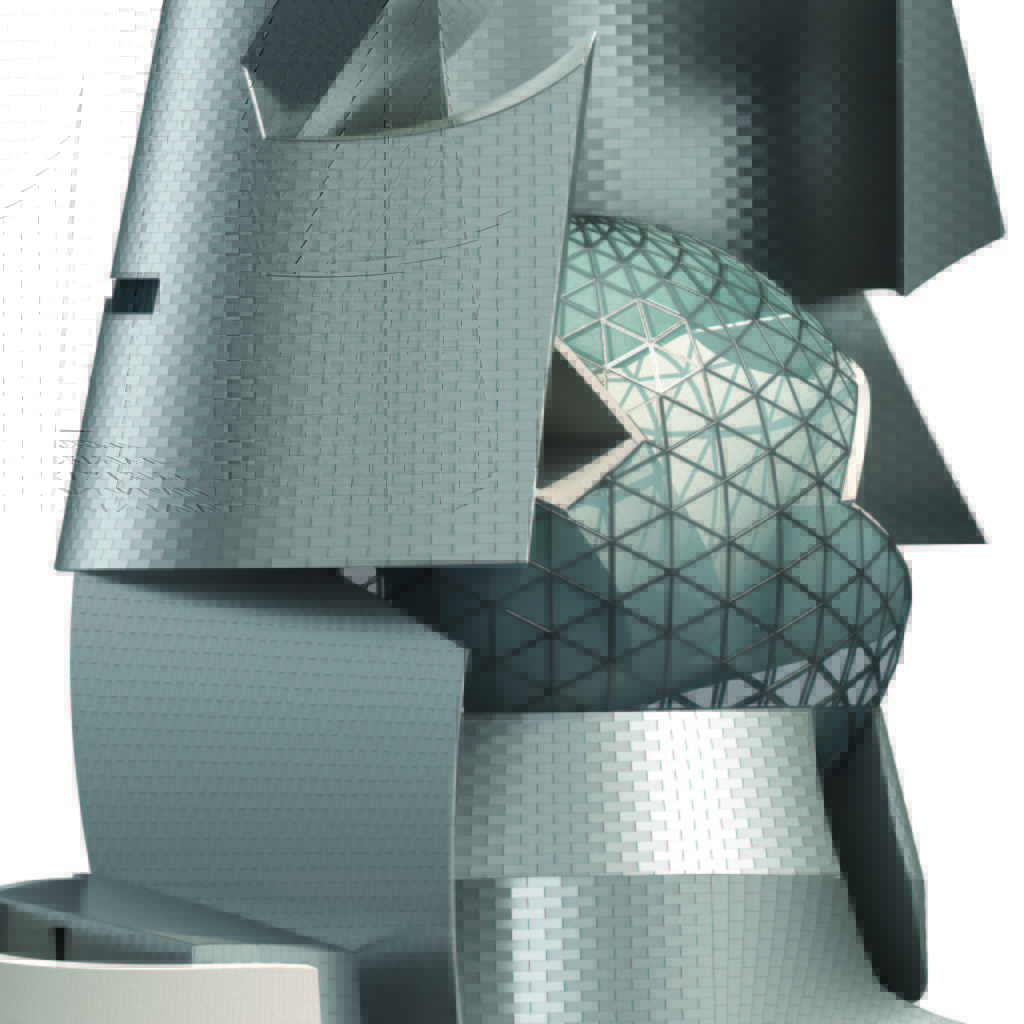 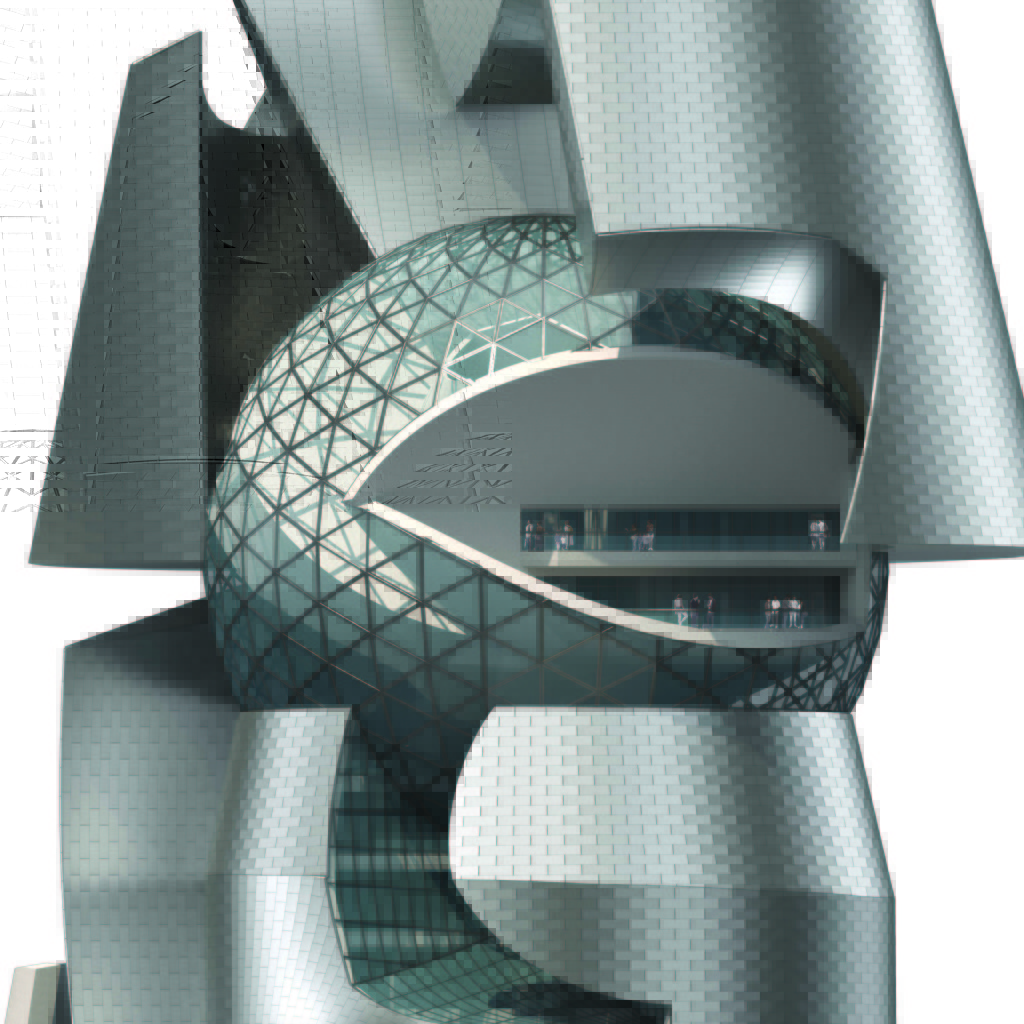 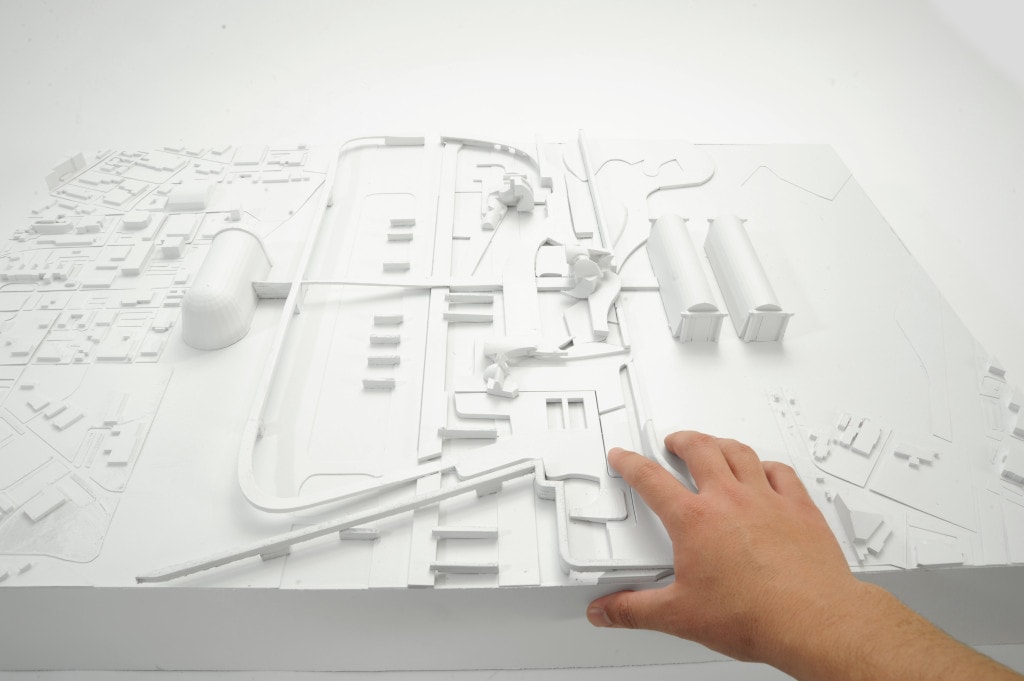 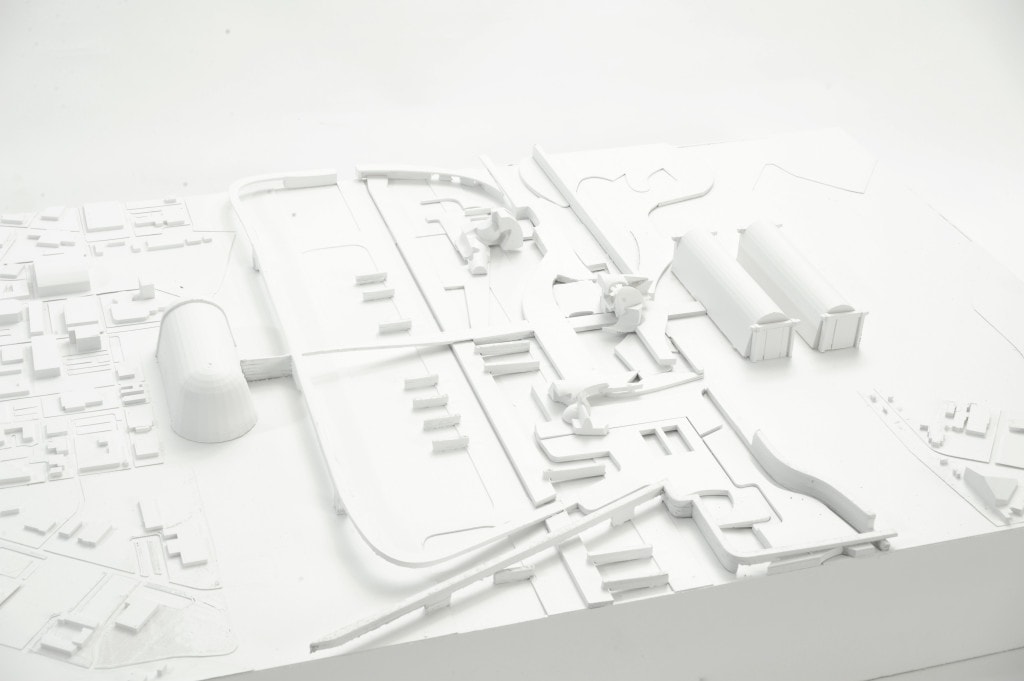 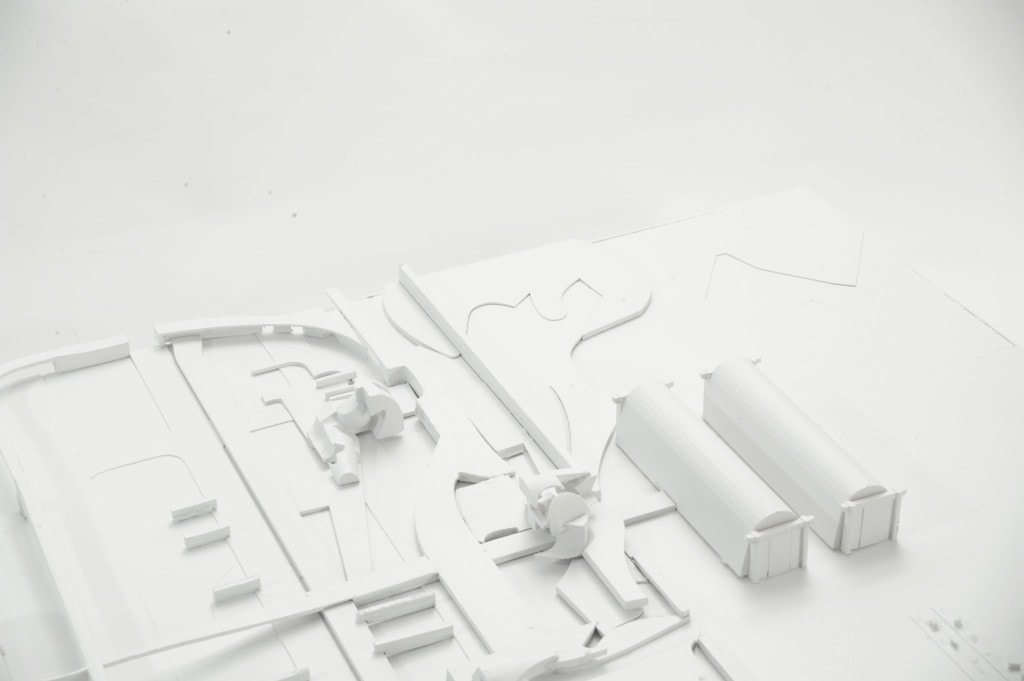 Amid pretensions of social responsibility, contemporary architecture serves as a mere tool of capital, bending over backward to meet the market demands of the developer and reinforcing social inequalities.  While architecture has always been tied to wealth, increasingly it has been optimized for wealth-extractive business pursuits like landlordship and marketing.  As such, the social mission of architecture has been lost.  When profit is the be-all and end-all, architecture relinquishes its role in ensuring a healthy public life.

This thesis proposes a new model of urban development, which puts people before profit and provides meaningful and accessible places of culture and recreation.  The “Public City” is a publicly-funded housing development and park, with a number of cultural centers (museums, performance halls, fitness facilities, shopping centers) dispersed throughout.  Through a number of planning and architectural strategies (irregular partitioning of the site, idiosyncratic building configurations, loose collaging of disparate elements), the Public City at once provides a diverse and sustainable social life and resists the threat of privatization by creating resilient communities.

The site is Moffett Federal Airfield – a decommissioned pre-WWII-era naval airbase which is currently owned by NASA, and leased by Google.   Google and its subsidiaries mainly use the site as an airport, as well as an occasional product testing site.  Moffett Field is a convenient location for Google’s executives, who fly in on private jets, store them in the two active hangars, and proceed to go to work at one of the many neighboring Google facilities. Moffett Field sits next to NASA Ames Research Center, and both complexes border the corporate sector of Mountain View – home to numerous tech companies, the most prominent among them being Google. Google has now consolidated a vast swath of land in Northern Mountain View, Palo Alto, and Sunnyvale, and they continue to expand both westward and eastward along the southern shore of the San Francisco Bay.

Moffett Field has been chosen because it is exemplary of corporate hegemony threatening the welfare of the general public.  While Moffett Field once served the common defense of the nation under the ownership of the U.S. Navy, and later helped explore space under the ownership of NASA, it is now a glorified private jet storage facility and corporate playground. Additionally, the extreme and abrupt influx of wealthy young Google employees (30,000 in a city of 83,000, which had no Google employees until the mid-2000s) has made the area increasingly unlivable; their arrival precipitated a skyrocketing in the cost of living, and problems with traffic, smog, etc.  Not only that, but Google continues to consolidate prime real estate along the southern shore, which boasts breathtaking views around the bay, as well as the quasi-publicly-valuable grounds of golf courses.  The citizens of Mountain View – and the broader Bay Area – are being squeezed more and more, both financially and spatially, and surely Google is one of the main culprits.

The Public City aims to address the challenges posed by the current arrangement and provide for the public life of Mountain View and the broader Bay Area on multiple fronts.  First, it serves as a massive public housing development, which aims to alleviate the acute housing shortage, eliminate homelessness, and provide a place of refuge for the alienated working-class of the Bay Area.  Second, it provides much-needed public space which the Bay Area sorely lacks, in the form of a wildlife nature preserve; large outdoor parks which include lawns, playgrounds, gardens, sport-courts, youth centers, and skateboarding rinks; and large plazas for organizing, demonstrating, protesting, and political rallies.  And third, it provides unique and exciting cultural centers, in the form of music centers, performance halls, art exhibits, a film appreciation museum, an outdoor amphitheater, fitness facilities, and shopping centers – which are dispersed throughout the site, mostly following along an elevated walking bridge which traverses the site.

The scheme includes a coexisting of Google’s current activities on site, including private jet flights and storage, and product testing.  The runway and hangars are preserved, but Google is forced to conduct their activities in harmony with the regular citizens of the Bay Area, including those who require publicly-funded housing.

Every great city has its cultural centers and tourist attractions.  Nearby San Francisco has the Golden Gate Bridge, the MoMA, Lombard Street, and Golden Gate Park – just to name a few.  In that respect San Jose – which is larger in population than San Francisco – is hardly a city at all; the closest it comes to having a cultural center is a few high-class shopping malls.  The same can be said of the rest of Silicon Valley, Mountain View included. Mountain View’s sole cultural center is the Shoreline Amphitheatre – just a few miles west of Moffett Field, surrounded by Google-owned properties and Google-owned buildings.  Mountain View does have a fairly nice strip of stores and restaurants downtown, but all are inaccessible for homeless people and, in most cases, working class people as well; and there is an utter lack of public space throughout the city. The Public City aims to build from scratch a public, cultural identity for the city of Mountain View, and for the surrounding Silicon Valley.

With every publicly-funded project, there is the looming threat of privatization, which in this case would surely exacerbate inequalities and eliminate hope for a cultural identity of Silicon Valley.  Thus the Public City is designed to resist this threat.  The developer model is challenged by introducing urbanistic and architectural inefficiencies.  At the urban scale, the developer’s motive to subdivide, modulate, and codify is obstructed through irregular partitioning, idiosyncratic building configurations, and interdependency of program (including co-housing).  At the architectural scale, the developer’s motive to partition off and rent out is disrupted through redundant circulation and awkward spaces.

Find more information about this project: at the following link:

View more of my personal work at the following link: