The building to be discussed is named the “Gross House” (in Hungarian: Gross ház), and it is located in the historical city centre of Budapest, right next to Deák Ferenc Square – the lively central hub for various interests, as well as public transport, in the Hungarian capital. It is surrounded by quite a few iconic architectural pieces. That being said, it is very likely that if you have ever been sightseeing in Budapest, you may have passed by this building, or you may have even entered one of its stores on the ground floor, but probably, you might not have taken too much notice of its majestic nature.

The present architectural image of central Pest started to develop after the Austro-Hungarian Compromise in 1867, with the establishment of the dual monarchy of Austria and Hungary and the end of the 18-year-long absolutist rule over Hungary, introduced after the Hungarian Revolution of 1848-49. With serious effort and investment, the country and the capital went through a rapid phase of progress, which also resulted in the unified city of Budapest. As a result of this process, the historical centre evolved, influenced by revivalism, into the shape we know today. The city, which was chosen as the Best European Destination of 2019, is rich in monuments and buildings, not just the highly popular ones that appear in all the images associated with the city. 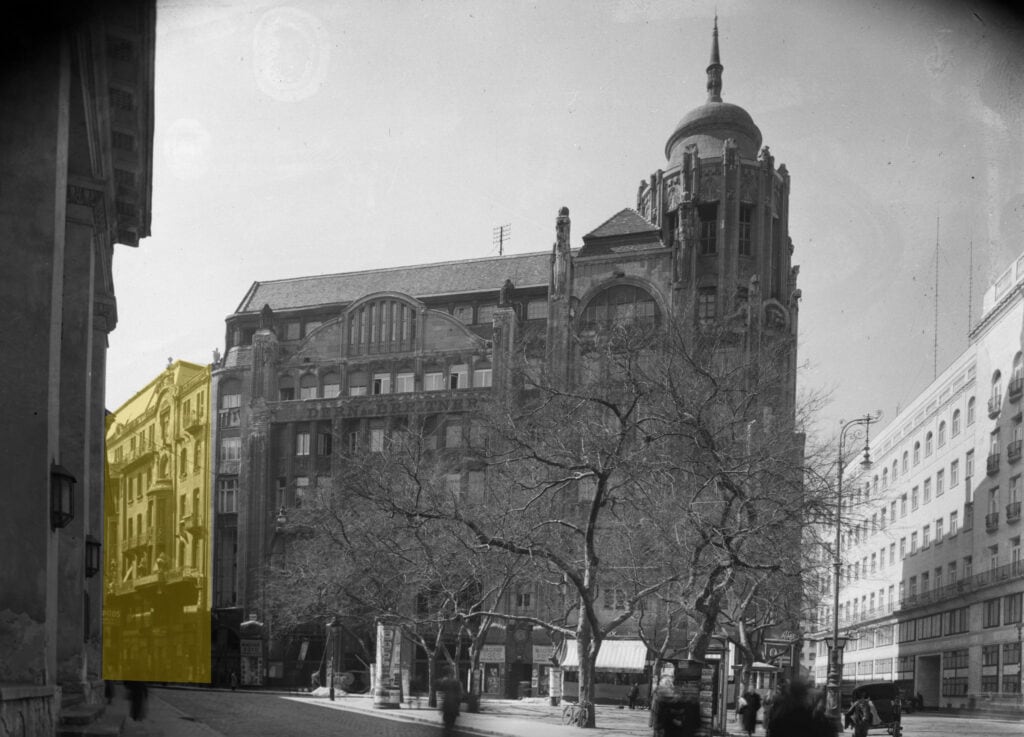 The Gross House came into being with the wave of tenement-building in the capital, at the beginning of the 20th century. It was designed in the spirit of the peculiar Budapest-style residential buildings, which resembled the Vienna or Berlin approach. In a typical case, an internal courtyard was positioned in the centre of the plot, and the wings of the building were arranged around it. Traditionally, the street wing hosted prestigious flats with several rooms, designed to accommodate wealthy tenants and often the building owner resided in this part as well. The interior wings, that opened onto the court, without a street connection, were intended for tenants from lower social classes, often some of them working in the service of the wealthy residents in the street front apartments.

The building was commissioned by Mrs Gross, the widow of Zsigmond Gross, a Hungarian landowner, who acquired two plots on the corner of Sütő Street and Fehérhajó Street. After the two pre-existing buildings were demolished, the project was developed on the conjoined plot, resulting in a trapezium layout. The House was designed in the architectural studio of Sándor Fellner, the plans were developed by József Mauer and later by Ignác Kende, embodying the neo-baroque architectural style, with the addition of copf-style ornaments. The first licensing plans are dated 1910, and they went through some refinement work between 1911 and 1913, which can be considered as the final design. The original elevation plans can’t be found anymore, but most probably they were developed in cooperation between the architects and the master builders, as were most of the similar developments of the era. 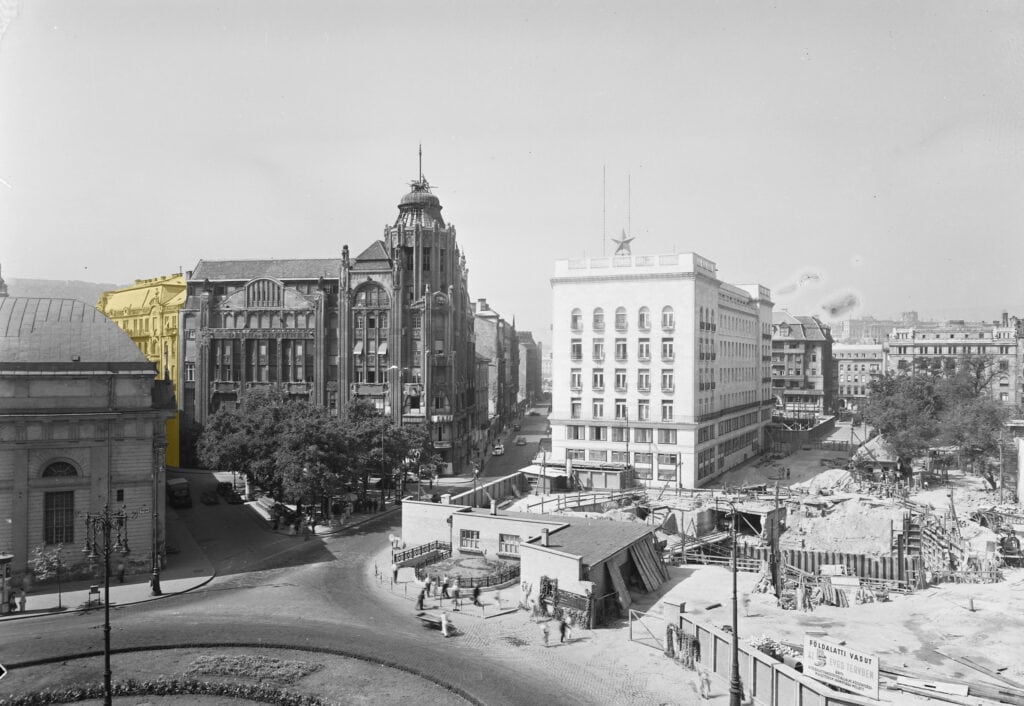 The façade of the Gross House, as seen from Deák Ferenc Square in 1952.
(1951. Hungary, Budapest V. Deák Ferenc Square during the relocation of the Millennial Underground stop, with the building of the Budapest Police Headquarters.
Source: Fortepan / Donor: UVATERV / Image number: 12804)

For the following years, there are not many surviving documents about the building. It is known, that in common with many other buildings in Budapest, it was severely damaged during World War II, and this damage was also the reason for the removal of the monumental, baroque cupola originally raised over the corner of Sütő and Fehérhajó Street, which can be only seen in historical photographs of the cityscape. 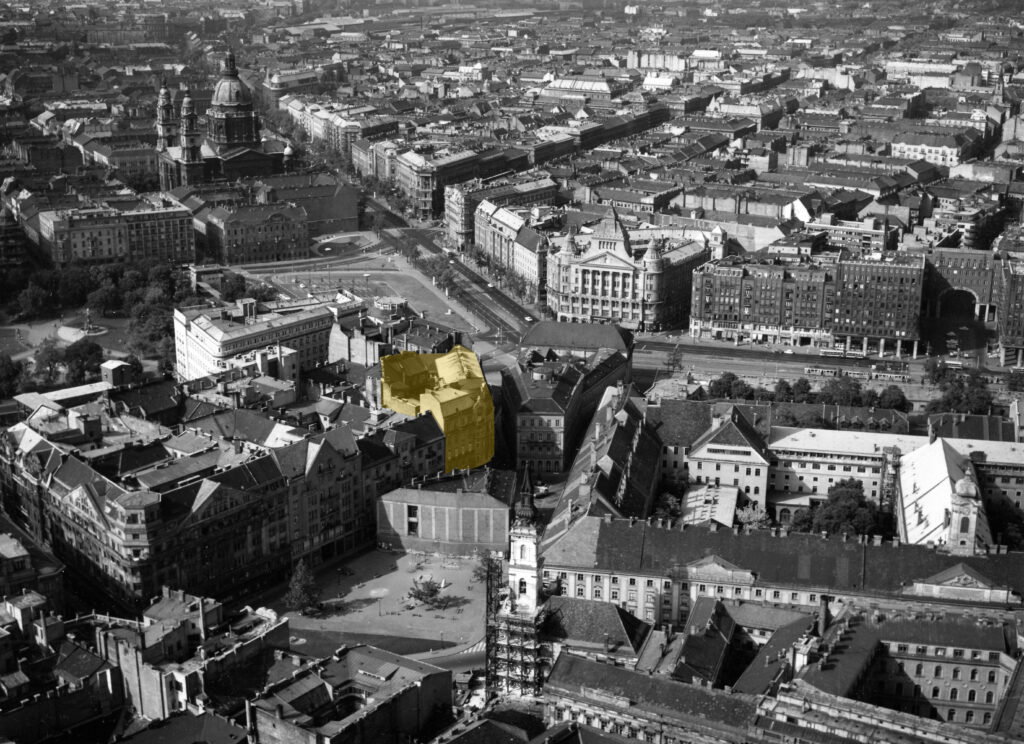 The House had a complete renovation in 1962, including major structural work and replacement of ornaments, which brought back the original architectural appearance and quality. Unfortunately, the renovation and maintenance works executed during the last three decades were not carried out with the same attention to detail, and this process resulted in the loss of harmony on the façade. 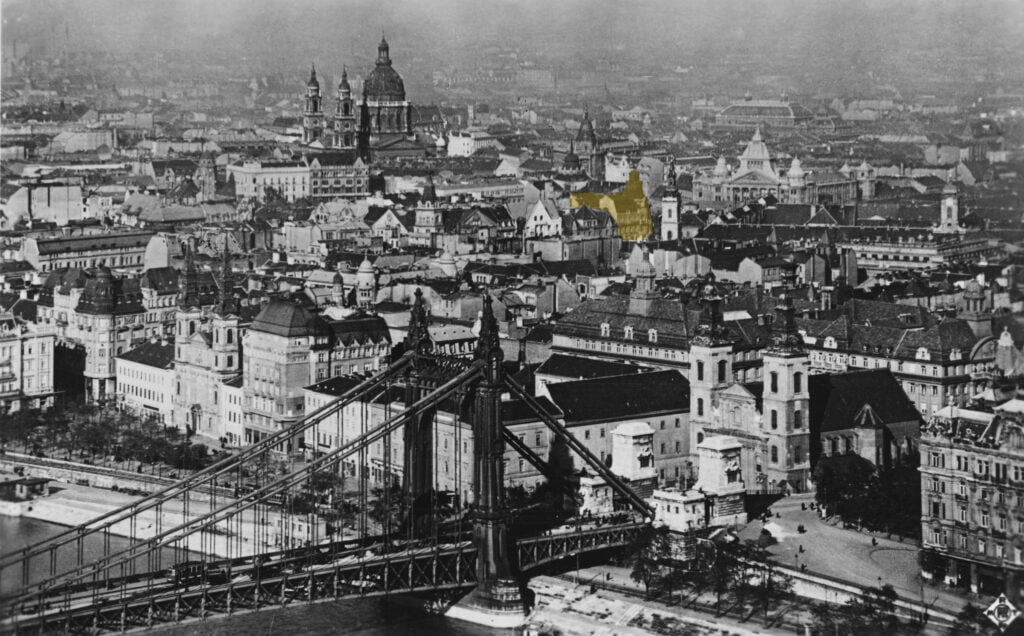 The building façade is aligned with the street front, attached to the neighbouring buildings at both ends. The openings are composed of seventeen vertical axes, divided between Fehérhajó Street and Sütő Street in a 1/3 and 2/3 ratio, with a curved corner accent on the corner of the two streets. The street level consists of one and half-floor high, spacious store premises, originally behind grandiose glass storefront portals, placed between pillar-like stone surfaced structures. The four floors on the top were designed to include apartments, with rhythmic vertical window openings throughout the whole façade, and balconies forming horizontal lines on the first and fourth floors.

The plastered façade is decorated with profiled ornaments and enriched with natural stone statues, mainly depicting floral patterns and garlands, with the addition of scenes on the risalits. The heavily decorated wrought iron handrails of the balconies and the portals were designed to follow the same aesthetic design.

As a whole, the building still embodies its original character and style, despite the additions of individual developments on the storefronts, which don’t do justice to the original design. Above ground level, the façade is in a bad condition, showing signs of water damage, erosion and missing ornaments. According to an evaluation carried out earlier, the building emitted a depressing feeling, and even without the cupola, it was suffocating the square in front of it with its grey colour and the degraded condition of the façade. 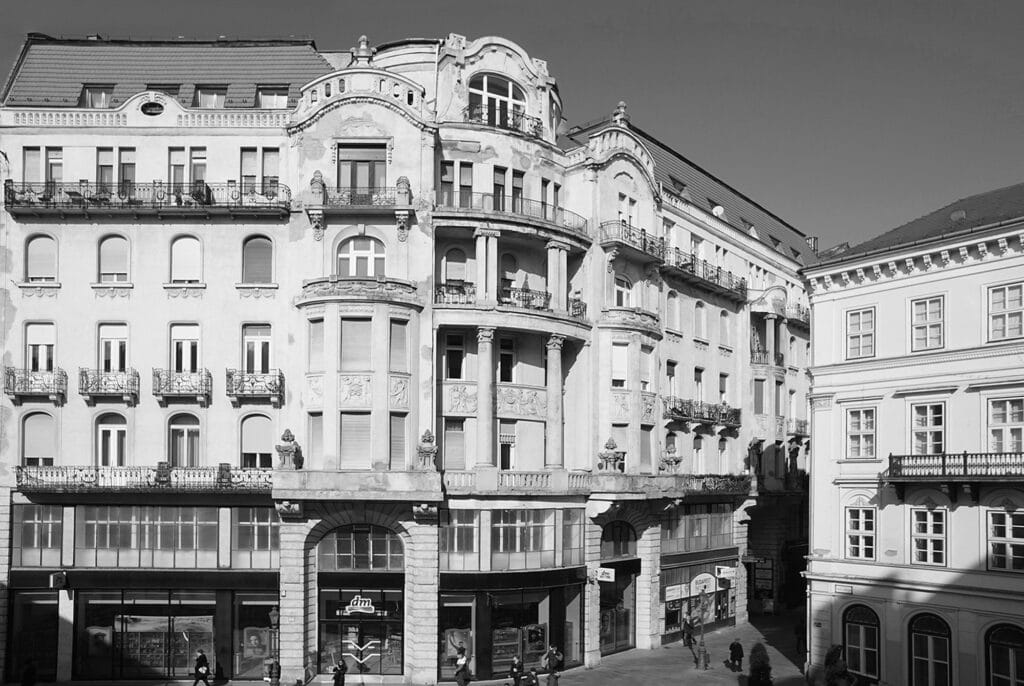 The proposal to improve the situation was rather peculiar. They suggested directing attention to the storefront level, to distract passers-by from looking up at the damaged areas. Also, they opted against bringing back the original design, as it might seem monotonous considering the length of the façade.

In 2020, BZS50 Studio and Grafit Műterem developed extensive documentation, including cost and condition surveys that graphically represented the location and nature of the damage. The detailed drawings depict the ornaments of the façade and serve as a base for future renovation works and new possibilities. In alignment with the views of the two studios on historical building restoration and protection, they decided on two colour variations, both suggesting a lighter colour option, switching to light beige shades instead of the existing grey. Regarding the storefronts, the suggestion is to go back to a consistent, uniform design throughout the whole building, respecting the original design, and simplifying it for a more organised, contemporary result. 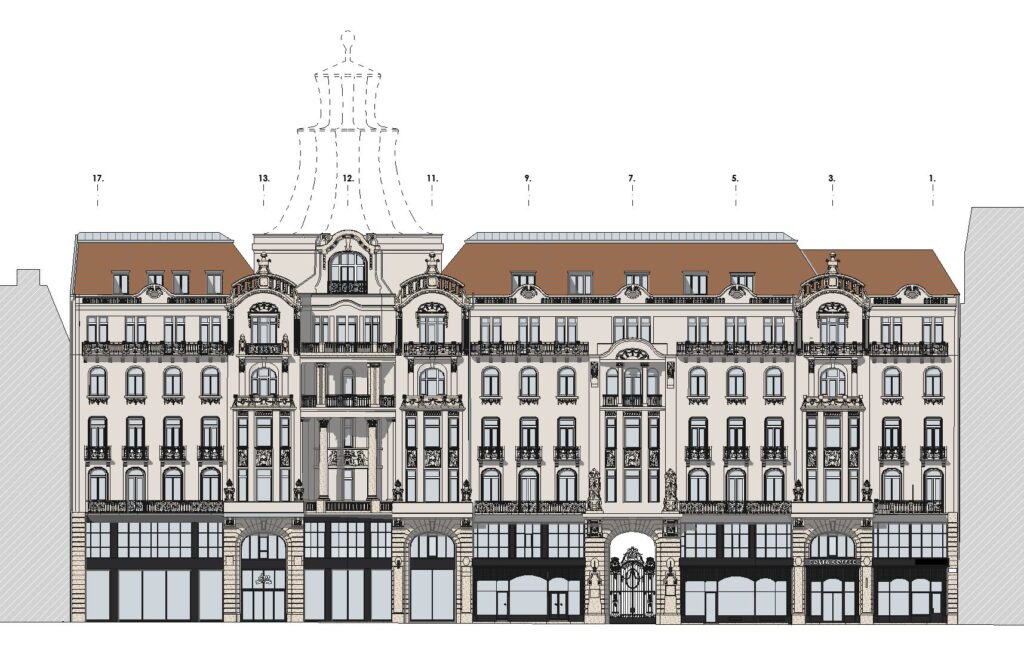 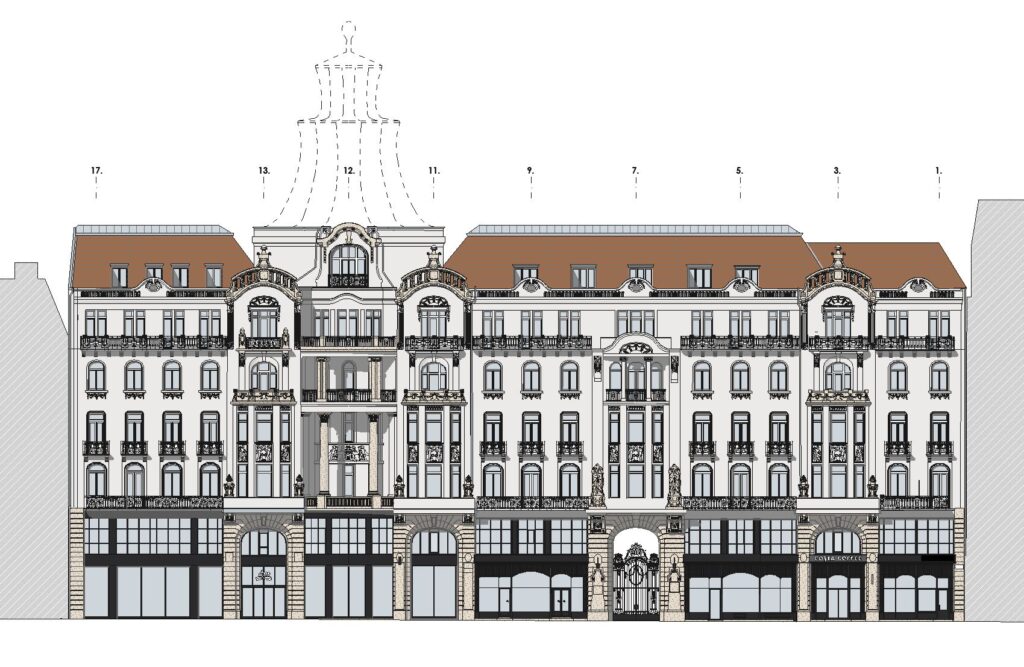 The research material supporting this article was collected by Grafit Műterem and BZS50 Studio while working on the renovation plans of the façade of the Gross House.