Cities are getting bigger and denser while buildings are getting bigger and taller. There is a growing significance of environmental issues such as urban island effects and reduction in energy consumption, which are relevant to dense urbanization. While high-rise buildings as a typology have evolved to become predominant nowadays, there are several challenges to meet.

With the increase of urban density and the decrease in the availability of land, the verticalization phenomenon has intensified in cities all over the world. Similar to the vertical growth of buildings — which is often a divisive issue for architects and urban planners – many initiatives have sought in the vertical dimension a possibility to foster the use of vegetation in urban areas.

Vegetation plays an important role in its special function as energy balance and improves human health in urban areas as air quality improves and temperature is better controlled. The benefits of vegetation in buildings are similar to ordinary vegetation in cities. It has become an important new construction principle to increase the livability and sustainability of modern buildings both outdoor and indoor.

This week we are focusing the newsletter on Green Roofs & Green Walls, Vertical forests and Terraces & Gardens.

1. BUILDINGS THAT BLEND NATURE AND CITY

Jeanne Gang uses architecture to build RELATIONSHIPS. In this engaging tour of her work through a TED Talk, Gang invites us into buildings large and small, from a surprising local community centre to a landmark Chicago skyscraper.

Vertical gardens, farms and forests, ROOFTOP vegetable gardens, and elevated structures for urban agriculture are some of the many possibilities of verticalization in plant cultivation, each with its unique characteristics and specific impacts on the city and its inhabitants.

3. ZERO-WATER GARDEN CREATED IN SHARJAH TO SHOW HOW DESERT PLANTS CAN THRIVE IN CITIES

Architecture studio Cooking Sections have created an experimental landscape in Sharjah to demonstrate how desert plants could be used as an alternative to water-hungry greenery in arid cities. It was created to prove the concept of creating waterless, ornamental GARDENS in urban areas like the emirate of Sharjah and other Middle Eastern cities.

Otters could return to urban rivers, bats could roost under bridges, swifts could flock to office blocks and peregrine falcons soar above cathedrals under recommendations from the UK Green Building Council, if we encourage BIODIVERSITY in buildings that could take on an unprecedented scale if guidelines published today are adopted.

Archinect have compiled ten outstanding projects from various architecture studios that are focused on bringing GREEN into the city.

Vertical Forest buildings are popping up around the world in cities like Paris, Milan, Shanghai, Astana, Eindhoven and Tirana, to name a few. The tall buildings prevent urban sprawl while bringing trees, shrubs and plants closer to home in the urban environment. Most impressively, they reduce energy use, improve air quality and increase urban BIODIVERSITY.

7. VERTICAL GREENERY SYSTEMS: FROM PLANTS TO TREES WITH SELF-GROWING INTERCONNECTIONS

The integration of buildings into VEGETATION has become a necessity in many metropolitan areas of the world today. It expands the potential of vertical and horizontal, exterior and interior, exposed and enclosed spaces in a building that can be used to accommodate plants. Green infrastructures have benefits both on urban and building scales.

8. 6 SOLUTIONS FOR TRANSFORMING YOUR BALCONY INTO A BIODIVERSITY SANCTUARY

Some plant and animal species are under threat in our towns. We can all help encourage urban BIODIVERSITY and many townspeople do encourage birds and insects to settle on their balconies. It’s easy to create a natural haven amongst the concrete – even a tiny one!

9. THE TRUE SCALE OF THE WORLD’S TALLEST BUILDINGS

This VIDEO reveals the true scale of the world’s tallest skyscrapers. claiming that it’s all about the area, not height, the video takes viewers through a world tour comparing the gross floor area of some of the tallest buildings and gives relatable references revealing that taller doesn’t necessarily mean bigger. 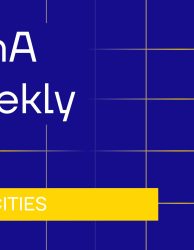 NonA Weekly: TAKE A WALK ON THE GREEN SIDE