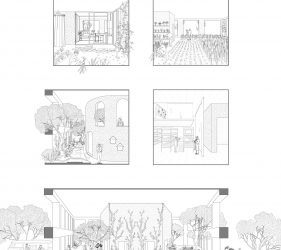 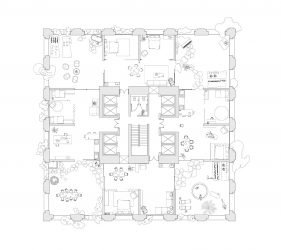 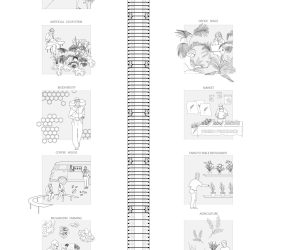 Manhattan doesn’t need a new building; it is already filled with less than efficient buildings. Like, the very tall Fry-like building we call 432 Park Avenue. It only accommodates about a hundred luxury apartments. We think that the lighthouse-like quality of the building calls for a public program that can benefit the city.

Our project only keeps the hyper rationalist structure and circulation. The many windows are a pretext to grow wisteria, ivy and vine. The square in front of the building is completely opened, offering a way through the block and serves as an urban public park.

The project can be seen as a first attempt at a circular economy in midtown manhattan, what is quickly becoming an obsolete urban model. Going up in the floors, the program evolves starting with some public functions: Produce markets, coffee shops,
restaurants as well as food production spaces throughout the floors: mushrooms underground, grains and vegetables on the higher floors. We then have in the upper levels, work spaces as well as a collective housing program, organised in a cross pattern, freeing up spaces all around for smaller community gardens.

We argue that Urban ecosystems are reduced to small spaces and are hard to maintain, almost artificial. That is why we introduce micro-ecosystems that are as much part of the system as the human. The building itself then becomes an ecosystem where humans actively participate, sharing space, water, sun and oxygen with plants, animals and insects. 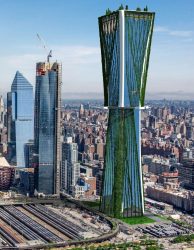 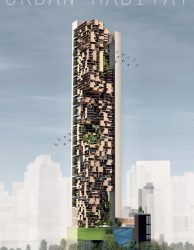 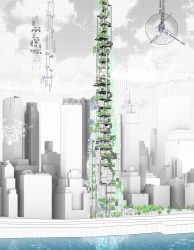 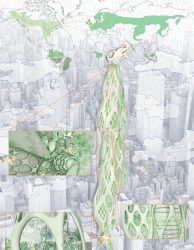