How to make a city? It is the question that we should all ask ourselves, but to which few have taken the time to find answers. Some solutions were derived from the circumstances at the time; others were implemented without any other rationale than the determination of a totalitarian government.

Therefore, if I may explain the story with unjust brevity, the answer to this question began when humans had to survive together. Therefore, they grouped strategically near the Tigris River, and Mesopotamia arose. Or centuries later, when similar settlements were affected by the furious conquests of other groups with far more ambition and less empathy. They had to build huge walls to protect them. The same walls that, with the passage of time, would be demolished at will because they prevented the ventilation that was so necessary to prevent the spread of diseases. The need to clean up the city became a priority and, as cities around the world tore down its walls, they also began to fill with parks and gardens that would function as “lungs” that would clean the air. 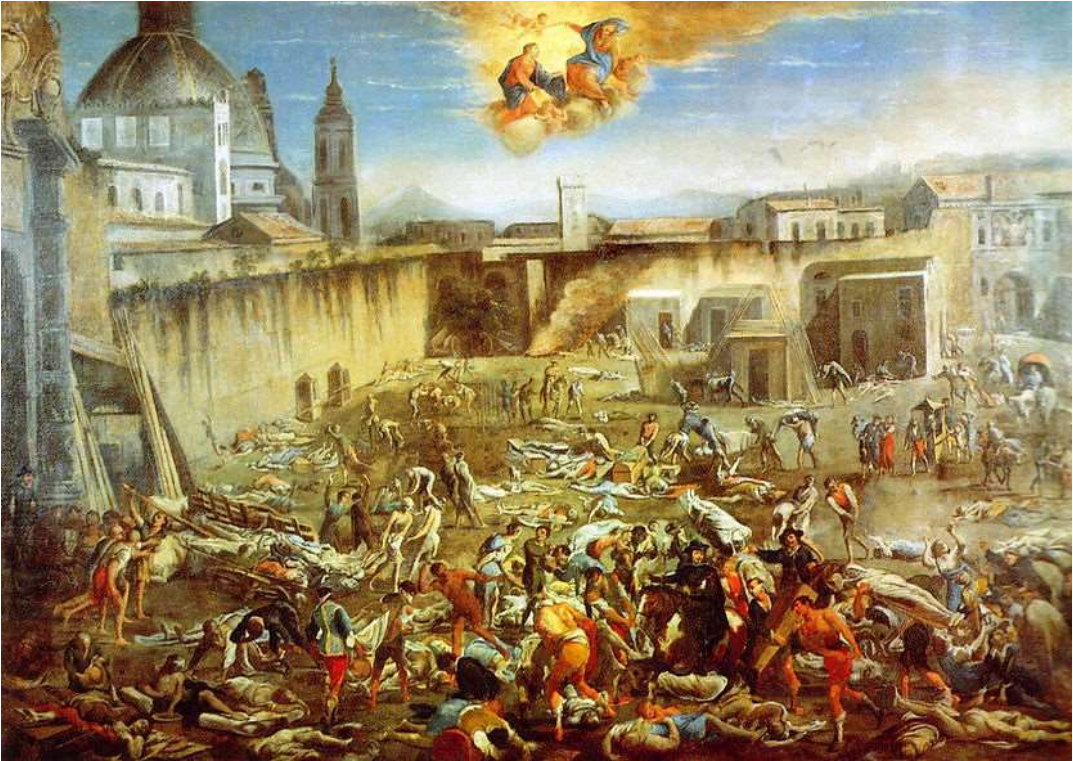 The market square of Naples during the plague of 1656. Painting by Micco Spadaro.

In this way, after having overcome so many evils over time, finally began to build the so-called modern city. Which, in its first steps, achieves notable successes as the Cerdá plan in Barcelona. Examples such as the Paris designed by Haussmann and its demolition process of more than 19,000 classic constructions were replaced by about 34,000 new ones. A consistent materialist approach to -according to the critics of the time- Haussmann’s insensitivity to the historical value of the city, and the desire for social control of Napoleon III, emperor of the time.

This questionable way of renovating the city was also intended by Le Corbusier, who decades later would devise La Ville Radieuse. Project that proposed to apply concepts such as zoning, to better organize the city. So, it was hoped to demolish part of the city of Paris again and generate housing towers that would accommodate the entire population of the sector. While, in its innovative zeal, the world outside these towers was designed for the protagonist of the time: the car. 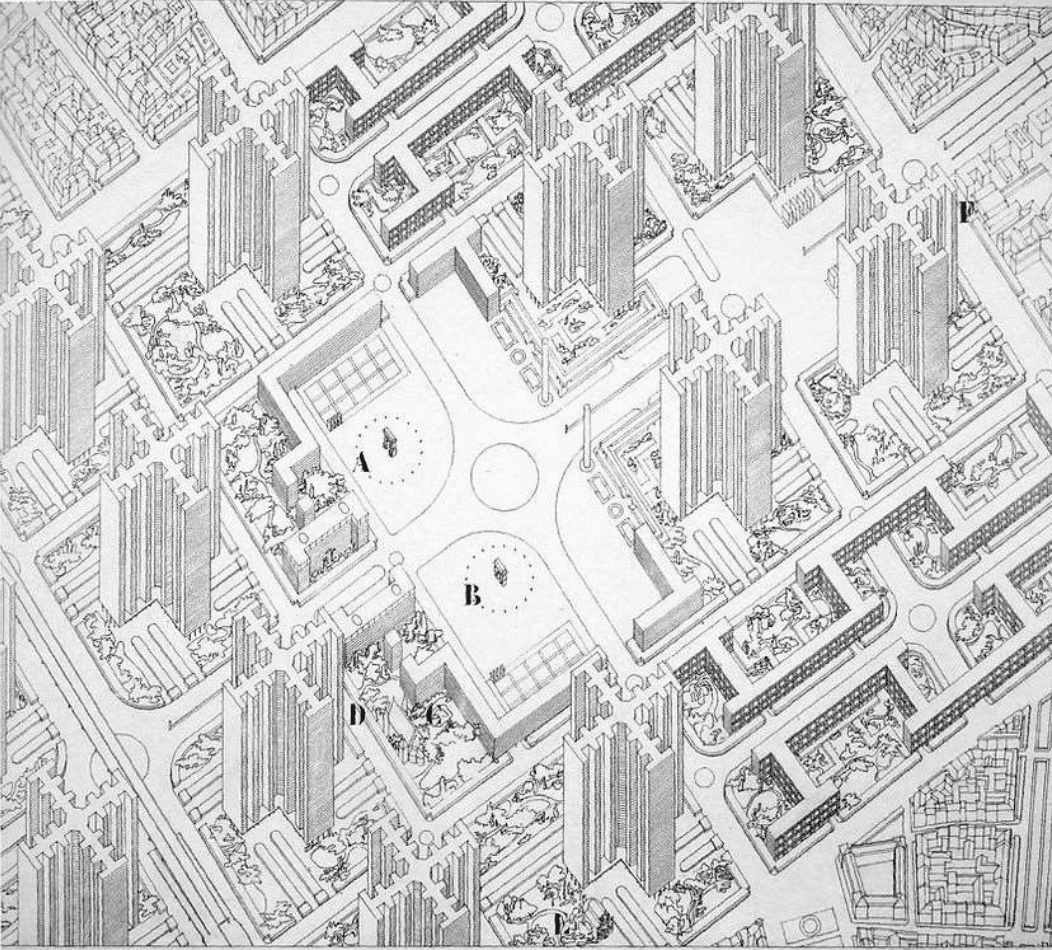 In America, the solutions that emerged in the old world to answer the question that concerns us today also influenced the moment of carrying out cities whose consequences are not very different from those already seen. It is the case of Brasilia, designed by Lucio Costa and the centenary Oscar Niemeyer with the aim of being the capital of Brazil. Its large public spaces, monumental buildings, and excessive distances have contributed to the cancellation of its inhabitants. They have reduced them to individuals without identity, to anonymous beings who are obliged to use the car to transport themselves. Similar opinion to that of the French philosopher Jean-Paul Sartre, who on a visit warned that the cold city was organizing in an excessively rigorous and inflexible way the life of its inhabitants. To this opinion are added those of many more detractors who point to Brasilia as a city without an iota of soul.

After having visited multiple historical scenarios in the world where it was believed to have the ideal solution to make city, it is time to make a leap together to our time, year 2020, and ask ourselves again: how to make city? Our situation has not changed much in relation to recent examples. Although new ways of making a city have emerged, in most of the world things are still the same. Obsolete paradigms that did not work before continuing to be applied blindly, contributing to the problem growing. Only this time, the problem of the city is no longer something incipient, but a giant monster that demands answers, a large mass of concrete that does not yield a millimeter and shudders with its incessant advance.

We are in this state. We are in a dramatic situation in which time is pressing, but few solutions are thinking. A state comparable to the sensation conveyed by that famous image of Hokusai: “The great wave of Kanagawa”. An image that conveys uncertainty, panic, but above all stress of knowing that a disaster is about to happen. The phenomenon depicted in the picture is not a tsunami, rather it is the sum of multiple waves that together form a gigantic body of water known as Rogue Wave, nightmare even of the great ships of our time. Likewise, the good intentions and erratic behaviors at the time of making city have caused a sum of urban disasters that today come together and form this great wave of concrete that engulfs us.

(Left) The great wave of kanagawa. Katsushika Hokusai stamp. (Right) Since this image is one of the most reproduced images in the world, why not make one that portrays the situation described under the name “The great wave of concrete”.

New answers are urgently needed for the city to remedy the desperation of that crew member, whose strength to row is useless to survive. Fortunately, just as there were precursors of these urban disasters that surely did not seek to do harm (I think) but obeyed the circumstances and notions of what was considered opportune in his time. There were also heavyweights who have made their ideas strong “oars” that contribute to placating the consequences of the cataclysm. And although their lives are finite, their ideas are eternal and deserve a whole article.

So, if you ask yourself: how to help paddle? The next installment will have the task of detailing how these individuals have fought or continue to fight for humanity to find alternatives that allow us to survive the great gobble, or at least reduce its impact. Meanwhile, it is the perfect time to let thoughts sink in and start preparing innovative tools to meet the challenge ahead. The future of the city requires criticism of the past that results in learning that contributes to the formation of new paradigms. Only then will we be able to move away from that lapidary phrase of the writer Vladimir Nabokov, “ The Future is But the Obsolete in Reverse “.