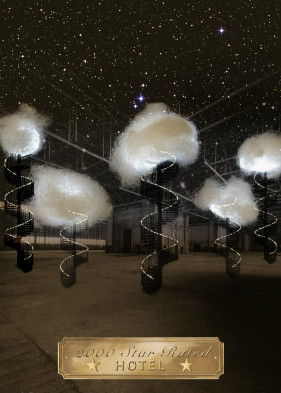 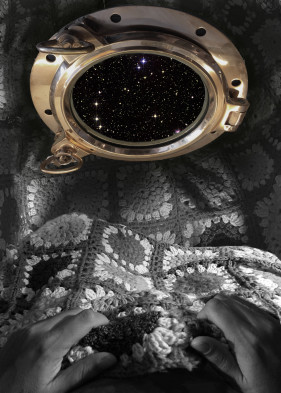 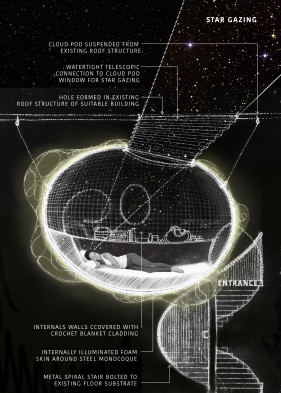 Converting an existing building into a star gazing sleeping experience

The rating systems consider a range of standard requirements that encourage the development of standardised hotel and room designs. Hotels turn into lists of facilities that can be easily quantified and compared.

However, the unquantifiable experience of being and sleeping in a hotel is more complex than simplified statistics.

Research reveals that it is possible to see around 2000 stars with the naked eye at any one time. The 2000 Star Rated Hotel relies on real stars to provide a unique sleeping experience and environment.

Any suitable building can be converted into a 2000 Star Rated Hotel with the introduction of cloud sleeping pods. These pods are steel monocoque forms, covered in an internally illuminated foam skin that makes them appear like softly glowing clouds. They are suspended from the ceiling structure of the existing building with suspension cables. Each pod has a glazed porthole positioned over the head of the bed providing direct star gazing opportunity. A telescopic tube is used to connect the porthole to a pre-made hole in the existing roof structure.

The cloud pods are accessed by illuminated metal spiral staircases from the ground level of the building where the main hotel facilities are all located, such as the sign in area, toilets, cinema, library, café, lockers and common areas.

The cloud pod interior is designed to be a comforting home from home with an internal envelope formed from crochet blankets and housing an integrated bed, storage system and night light.

The 2000 Star Rated Hotel can be retrofitted into any suitable existing large building such as a church, shopping centre, train station, warehouse or aircraft hangar. The potential locations are endless and omit the emphasis on heroic brand architecture.