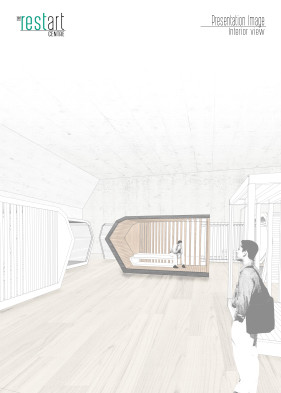 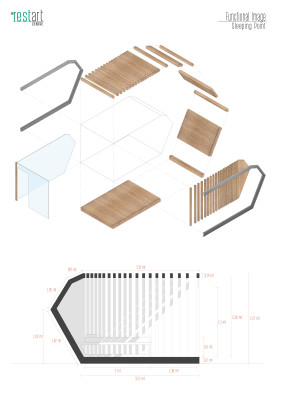 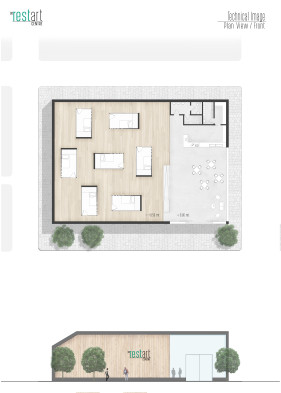 “The RestArt Centre” is not the usual hotel: it is something different, where sleeping – such a usual activity – becomes something outside the box. This project is born from the idea that some people would like to have a rest during various moments of the day, for example during their lunch break – a dream often hard to realise owing to the distance between their home and their workplace. For this reason, “The RestArt Centre” aims to offer its costumers a break from a chaotic city and a stressful timetable, providing them a private place where to relax and to rest before they restart working. Inside the building, in fact, there are some particular “sleeping points” which can be rent for a short period of time.

The centre works as a common Internet café, providing a bed and some rest instead of a computer and Internet access. The users pay a cheap fee according to the time of use of the cabin and they also have access to some other facilities before restarting their daily activities (such as having a coffee or a snack in the bar inside the building or using the clean and spacious toilets of the centre). In this way, everyone can have a peaceful and relaxing hour or less to get some rest and restart the day.

The building is developed in one single floor, which is divided in two areas: the “quiet area” with seven different “sleeping points” and the reception area (which includes the hall, toilets for the users and a small bar with its related store room). The two areas differ in their height from the ground (the “quiet area” is 50 cm higher than the other one) and they are entirely designed for all costumers.

The “sleeping points” are built in wood, steel and glass, with non-continuous walls, which allow the users to have a constant circulation of air, and, at the same time, they ensure the costumer’s privacy.

The cabin has been conceived to be an object of design, joining aesthetic and utility. The “C form” looks cosy for the user, and at the same time it has a perfect recess where to collocate the bed. Even the lower area of the bed generates a useful space where to put cumbersome objects, so that the space at disposal appears to be bigger.

The exterior of the pavilion is soundproof, in order to isolate the inside from the chaos of traffic, and it is built with wood, glass and steel, such as the “sleeping points”; the front is designed with the same shape of the cabins and it is characterised by a long horizontal development.