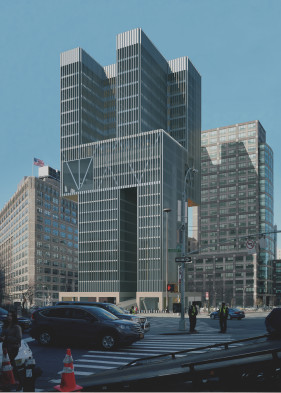 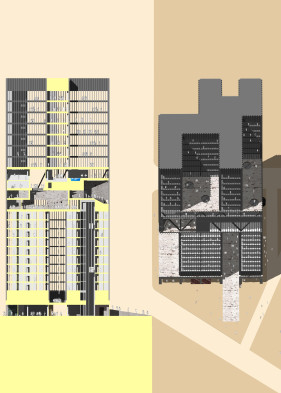 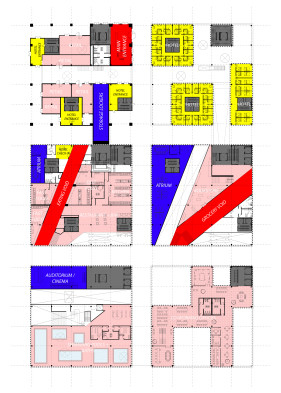 The relationship between architecture and human habits has changed considerably since the 20th century due to our media. It is estimated by 2020 that 40% of the American workforce will be independent contract workers. This rapidly growing number has ultimately caused many workers to ‘internalize’ to a domestic setting where all aspects of life have physically blurred together. This problem is explored through the form of a hotel, a program which has a long history of combining working, living and leisure, making other typologies redundant.

Assembly Hotel interprets this typology as a possibility to challenge the boundaries of public and private space: to re-insert a dose of the public sphere into working and to externalize leisure as it once was. Assembly Hotel reflects the international bourgeoisie, a class of university educated professionals that are under pressure to be flexible, always traveling and always working. Assembly Hotel attempts to do this collectively [interacting with strangers], a notion which has been [re]normalized with new media like Uber, Airbnb, and WeWork. Assembly Hotel transforms rent into a monthly membership fee which grants individual access to a room, amenities, and workspace every night of the year in one the Hotel’s many locations worldwide.

The location of the project is in Hudson Square, New York City, which is a rapidly developing area above Tribeca which recently doubled its F.A.R from 5 to 10. The massing of this building is simple: One cannot go from a Hotel bedroom straight to the Co-Working Office without entering a Transfer Level where the hotel and co-working space “intersect”, creating a semi-public “buffer” zone. In a nostalgic sense of things, and if we think of this building as a city within itself, a self- contained container, then Assembly Hotel has attempted to appropriate a sense of “being in this world”, of entering the public domain. The Hotel Rooms are on the lower levels of Assembly Hotel with Co-Working separated upwards, making the space of production the “penthouse.”

A typical Hotel room is about 35 SQM. In this hotel room, the activities of living, working, and leisure, are blurred together. You work on your bed with your laptop, you participate in online leisurely games, you order seamless.com food etc. You never have to leave. Assembly Hotel finds this problematic. The result is an exercise which separates activities and redistributes say, the desk, tv, couch collectively. By hyper-focusing program, the hotel room is only for sleeping and waste. Long stay units are 25 SQM and short term stay units are 12-7 SQM. With these dimensions, around 350 units equal 5,605 SQM as opposed to 350 typical 35 SQM units equaling 12,205 SQM. The remaining 6,600 SQM allows Assembly hotel to re distribute the square footage to create new program like Co-Working Space and Baths.