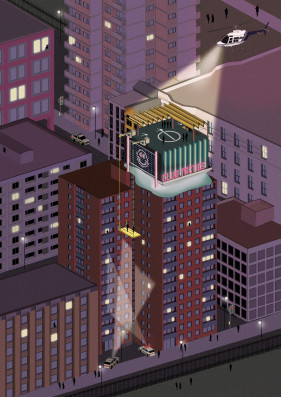 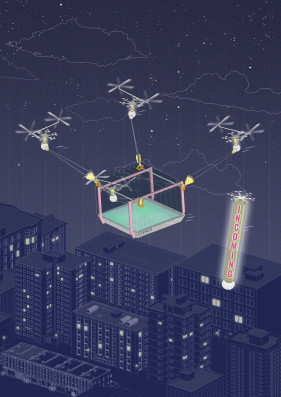 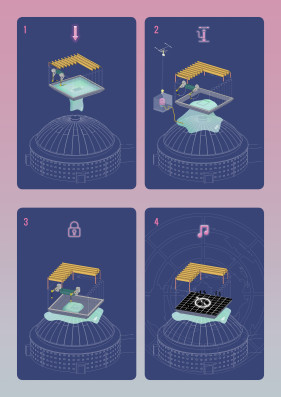 Clubs have long acted at the core to social movements, and proved vital to marginal groups attached to such. Acting as a catalyst and enabler – the miscellany within club-culture is a strong model for empowering fringe communities and their individuals. However, clubs are becoming further burdened by commercial restrictions in the city, while ‘fringe-spaces’ for new movements diminish due to relentless development. While centralisation will only increase dynamism within cultural movements, this leads to the prediction that rave culture will heavily re-emerge.

‘DePlaced’ is a whimsical notion towards sustaining niche culture. It describes an open platform for club movements to be physically dropped in as incisions to the city. The rave can be tracked through the sky before landing – becoming a beacon of free-space.

Using future aero-gel technology as base structure, the club is able to fix to varying building typologies. Once in place, the aero-gel is released, taking form of the roof before being inflated. This then provides a balloon-like foundation, both shock and sound absorbent.

The structure allows for flexible club space. The height and randomness to which the structure can be placed makes it impenetrable to police, allowing for future club movements to operate freely.