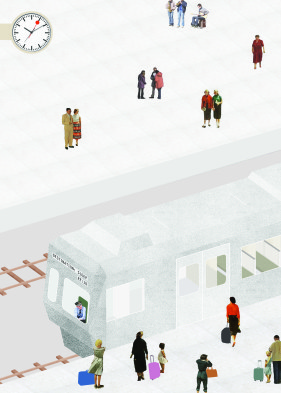 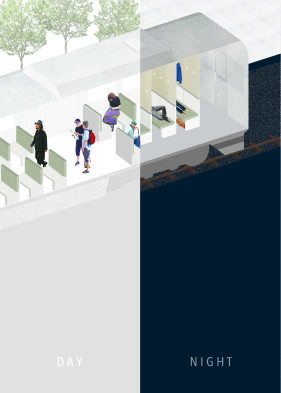 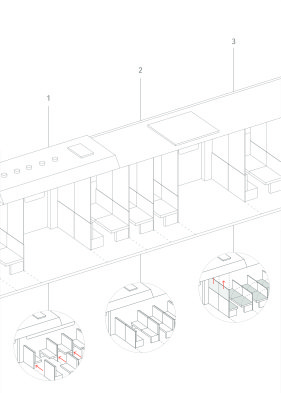 In many cities trains are a widely used form of transport that become less frequent and stop running past midnight, leaving the empty train waiting until the next morning. We propose to transform these trains into a place to sleep for travellers. To board the train travellers will buy a Sleeping Ticket on a smartphone app where they can find which destinations are available, the capacity, and the time schedule the train picks them up and drop them off. This low cost accommodation model adds diversity to the existing hotel typologies available in most inner city locations.

At night time the Sleeping Train will pick up the travellers from their desired train station where they will transform the seats into beds by sliding them across to join. The cushion folds down to provide a larger and clean sleeping area. Pulling up panels hidden in the backrest forms individual compartments that creates privacy and a sense of security. Throughout the evening a receptionist is stationed in the locomotive that will manage the hotel. The next morning the Sleeping Train drops the passengers off at their desired train station giving the travellers flexible locations at affordable rates. They store their belongings in the lockers provided at the train station and begin their day exploring the city. The train then transforms back to its usual form and continues to function as per usual.

This model uses existing train networks within a single city that can be adapted to all different places, train timetables and infrastructure. As our cities are expanding at an unprecedented rate, spaces within cities are becoming more and more valuable. With our rapidly increasing digitalised world, the Sleeping Train allows travellers to take advantage of good locations with the single touch on a smartphone.