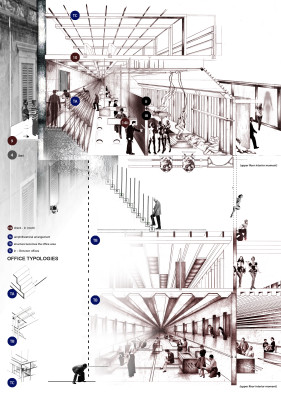 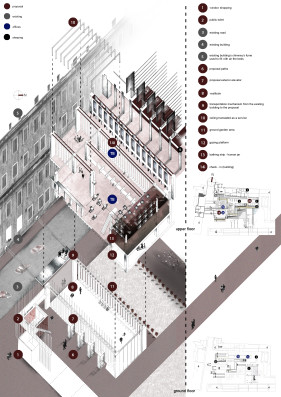 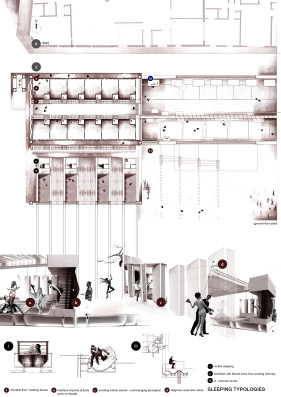 The future hotel will accommodate working and entertainment environment. Two contrast programs, serviced – office and prostitution will be combined in order to fulfill the new hotel proposition. The architectural alignment is under the lens of technology and voyeurism, thus creating a rather ‘playful’ atmosphere among gazing. As serviced – office and prostitution are programs that need temporary accommodation, the hotel will satisfy their concept, considering time as the fourth dimension. The formality of the one and the informality of the other creates new typologies for the working environment and finally new typologies for hotel (sleeping typologies), having in mind the surrounding context in Krakow, Poland.

TA. Amphitheatrically arranged office (workers become the voyeurs but also the subject of gaze) TB. Structure becomes the office area (the instrumental design of the building allows offices to exist

upon the walls as if the structure becomes the office area)

TC. Movable Office (floor is also becoming a service for the office, which allows the office area to move along the space in order to create the flexibility a serviced-office needs)

I. Mobile Sleeping (a device that connects the proposal design with the existing context, allowing the

users of the existing buildings to experience sleep in the hotel)

II. Bed filled with air – fume from the existing chimneys (bed is acting as a tool inside the proposition and is treated as a service inside the building using, once again, the qualities and the characteristics of the existing context)

III. In – Between Levels Sleeping (sleeping in spaces in between other areas like offices intrigues the idea of voyeurism but also sleeping becomes an active program in the building)

The whole structure is a set of parts (components) coming together to create a socially interactive machine – building, physically and mentally, along with intangible experiences using a technological culture. In addition, the ‘new’ hotel synthesis brings the sexuality in space through the organization of the program and hierarchy of levels. Moreover, the new hotel proposition is actually using the surrounding environment creating circulations into the building converting it, into a nodal point to Krakow. The strategy to do that, along with the whole building treatment, was based in the tectonic logic – a system, where the actual construction of the building is merged with the experiential construction -ideology of the user.

Serviced office is a flexible office area that can be rented for a period of time by an individual or a company. Prostitution is lawfulness and inside the project the possibilities of this is to perceive it as a big financial company in order to bring a new social order in things. Having that said, a guest, an individual, or a company will check – in to the hotel, either for work or leisure but it will also serve a temporary accommodation area considering the new typologies are founded through the whole concept. Welcome to the Eroto-mechanics Hotel.