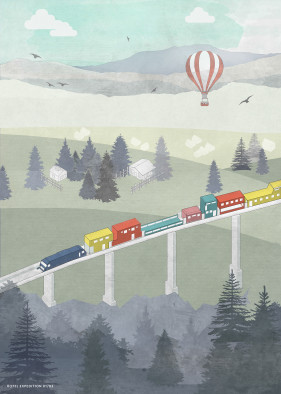 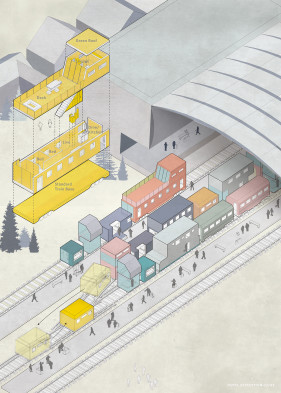 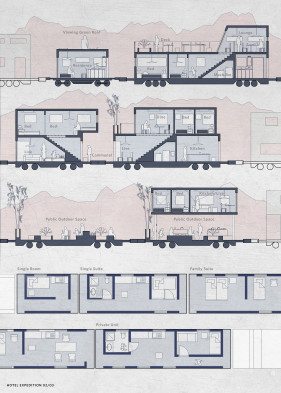 The next generation of travel

Hotel Expedition challenges and extends what a traditional “hotel” could be. Rather than finding a new place to stay in each city, bringing luggage with you as you travel, switching hotels each time moving to a new city, the design of Hotel Expedition provides the convenience of staying at one place through travelling, bringing your luggage with you, and having a secure base everywhere you travel to. Providing the services of home as you travel, the hotel provides a new system and typology which allows the traveler to become an explorer. No longer burdened or restricted by the limitations of services, items, and limitations of vehicular travel,. The hotel extends the services of not only the traditional hotel but also public transportation.

We’ve designed a new typology of “mobile hotel” that shifts the notion of travel to one of exploration. Removing the barriers
and restrictions of vehicular movement, the traditional hotel system, and the lack of spatial and perceptual security in unfamiliar places, Hotel Expedition leaves what’s left— exploration. Young backpackers, for example, are able to travel to many places in
a short period time with the security and foundations of home. On their journey, travelers staying at the hotel can meet up with other travelers who go to the same destinations or perhaps bump into people who come from the same old town they were from. Seniors, who may be restricted in the places they can travel each day, needs the support of a comfortable environment, and ease in travel, are now further liberated with the support of this new typology of the mobile hotel.

UNITS: The units, as a group, deviate from traditional hotel/building-train typologies by spatially being neither fully inside nor out. Fitting with the theme of revamping the rail system with the hotel, shipping containers and old train units are retrofitted into train compartments to make the units more economical.

TRAIN:The modular units, like traditional train cars, can disassemble, reorganize, and reconnect for a customized, liberated, and individualized experience. Travelers in modular hotel units can detach at designated stations and reattach to passing trains in the system.

SYSTEM: As a whole, the mobile hotel system saves time, changes the experience of travel, and provides a new precedence of what travel, the traditional hotel or sleeping in an unfamiliar place, could be. Travellers hopefully have an easier time moving between destinations and have no hassle moving between hotels.

Rather than staying at inconspicous rooms at each city, place, destination, the Hotel Expedition emphasizes the journey, the process, the connections the traveler experiences. Not a typical train or building hotel, a system of modular rooms/containers reflect a moving building typology where custom experiences can be added and tailored as the journey of life.