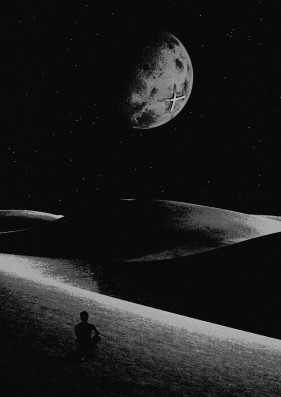 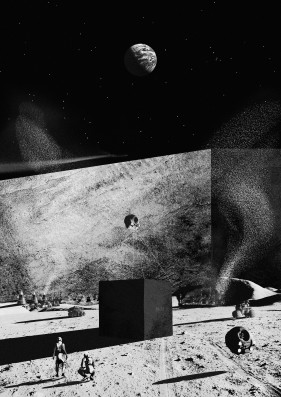 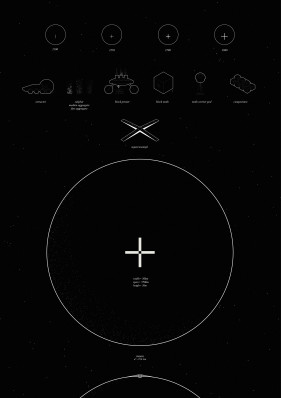 Title: Supercenotaph
Subtitle: An ode to life and death (un)reachable to everyone

Hashtags: cenotaph, moonument, automation, future, everyone
We live in a globalized world. Technology advances at great speed in all areas except death. We continue to bury the dead or cremate them in a traditional manner. After the funeral, people go to the tombs to visit the deceased, to leave a few words and flowers. With globalization, this ritual has become rare in the younger generations and we suggest the creation of a death monument that the entire planet had daily access to.

As death has a strong connection with the cosmos and the night, we propose the design of a monumental cenotaph on the moon. The moon would represent death as a concrete but abstract phenomenon, assuming itself to be real but unreachable celestial body for the ordinary of mortals.

Robotic automation would produce massive cubic blocks of special lunar concrete with locally extracted resources (sulfur, regolith, aggregates)* representing each death on Earth until the extinction of humanity. The blocks will be arranged in a pyramidal cross, a geometric solid reminiscent of primordial and elemental architecture, creating a strong play of shadows and a definitely, human-made, visible image from the Earth.
With this monument, which grows over the centuries, we can create a universal cemetery in the sky that unites humans and reminds us of the daily fatality of death. Reflecting on death may make us think more about life and how to give it meaning. At the end, leaving an archaeological legacy as a record of our civilization.
*this is the only confirmed way to produce concrete on the moon, sulfur as the binding material of aggregates.