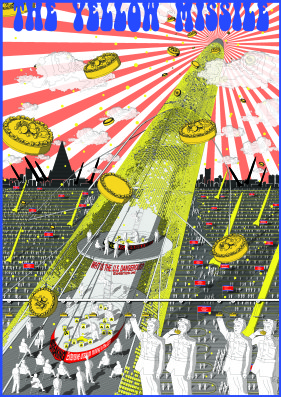 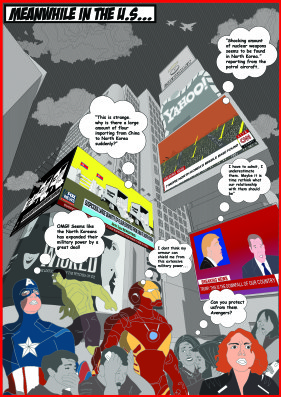 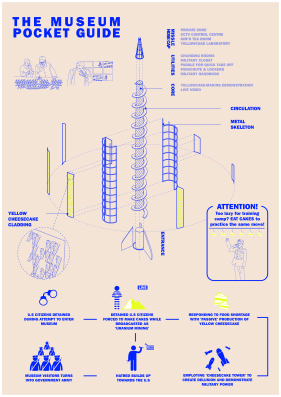 Museum according to Kim Jong-un’s ambitions and appetites.

Amidst the 2017 US-NorthKorea Nuclear Arms Race, Kim Jong Un makes a remarkable twist when his enemy state discovers their massive amount of Yellowcake (a nickname for Uranium) storage and a bunch of missiles ready to shoot. Trump is devastated, the nation is left in the state of hysteria, even the Avengers couldn’t stop a nuclear missile. Yet one thing the Americans not know is that the Yellowcake missiles seen on satellite photos are actually North Korean’s museums used for propaganda purpose, covered in thousands of edible yellow cakes, produced by the American hostages inside the structure.

The ‘Missile’, is used as military strategy over the US by displaying superiority in Nuclear weapons. It is also a tiled stage used to deceive the citizens by exhibiting a low resolution ‘footage’ of Americans making uranium powder – which is actually the American hostages in captivity, making the savory yellow cheesecakes for the army and Kim. The citizens are led to believe the Americans are going to blow up their nation, only unity would save their country. One by one they change into military uniforms, eating the yellowcakes, and march out of the museum, ready to fight. The Americans remain oblivious about this.