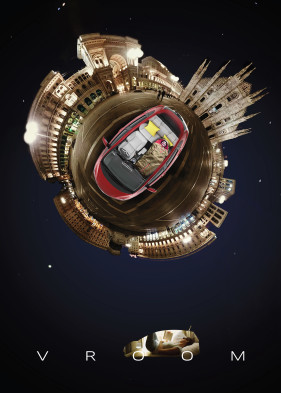 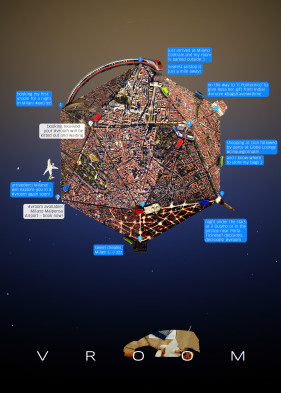 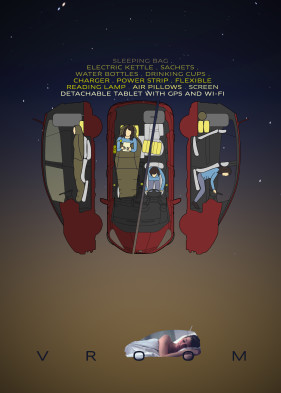 The room you can drive!

The success of a hotel was traditionally judged by ‘location, location, location’. But with the rising value of real estate, hotels can only be successful at prohibitive costs. Coupled with lean periods and shifting city centres, good hotels are an expensive proposition for owners as well. In an age where multi-functionality is a norm, the working of hotels must also reflect this spirit.

Enter the Vehicle-Room, or Vroom – a hotel that moves with the times, figuratively as well as literally. The hotel is visualized not as a building, but a system. The existing network of cars is utilized to host guests, with an easy-to-maintain-and-replace kit to enhance comfort. Vrooms are provided on a ‘supply on demand’ basis and the same cars can be used as cabs/ personal vehicles in lean periods. Existing multi-level car parks/basements are used for docking, providing the luxury of sleeping at a place of convenience while staying connected to the city’s major hubs. Other facilities such as toilets, restaurants, shopping etc. are sourced/shared with existing city infrastructure as designated ‘Pitstops’; this could be a revenue sharing model with a mall in exchange for certain amenities. Thus, the Vroom stays with the guest from the point of entry in the city until exit, providing a unique solution for resting and moving around.

A guest would first be required to register with Vroom through a web-integrated service (app/website) with their personal details and driver’s licence. Once registered, she could book a Vroom for a certain number of nights, along with the desired sleeping location/s. The local operator would then receive an alert and kit out the car for use as a Vroom. Default kits would include a sleeping bag, air pillows, windows screens, a kettle with cups and sachets, drinking water bottles, a tablet with internet and GPS, and power supply. The components of a kit could be upgraded based on guest feedback.

On the day of arrival, the operator would drop off the Vroom near the point of entry at a manned Pitstop. The guest would verify their identity and the Vroom, receive the key, and start driving. The Vroom tablet would indicate the location of Pitstops nearby with parking vacancy, re-kitting spots, toilet and shower areas etc. At night, the guest would drive to the pre-booked Pitstop to sleep – a unique experience that can be changed nightly. Once the trip is complete, the guest would return the Vroom to the designated Pitstop near their exit point, pay for the service, and leave. The operator would re-kit the Vroom for its next use, or remove the kit for use as a car once again.

A Vroom system based on electric cars would simplify power usage at night as well as lower fossil fuel usage. The system could be extended to public areas such as bio-reserves and heritage spots to boost local tourism, with minimal infrastructure costs. Both these points would encourage early adoption by local authorities/governments, boosting initial investment.