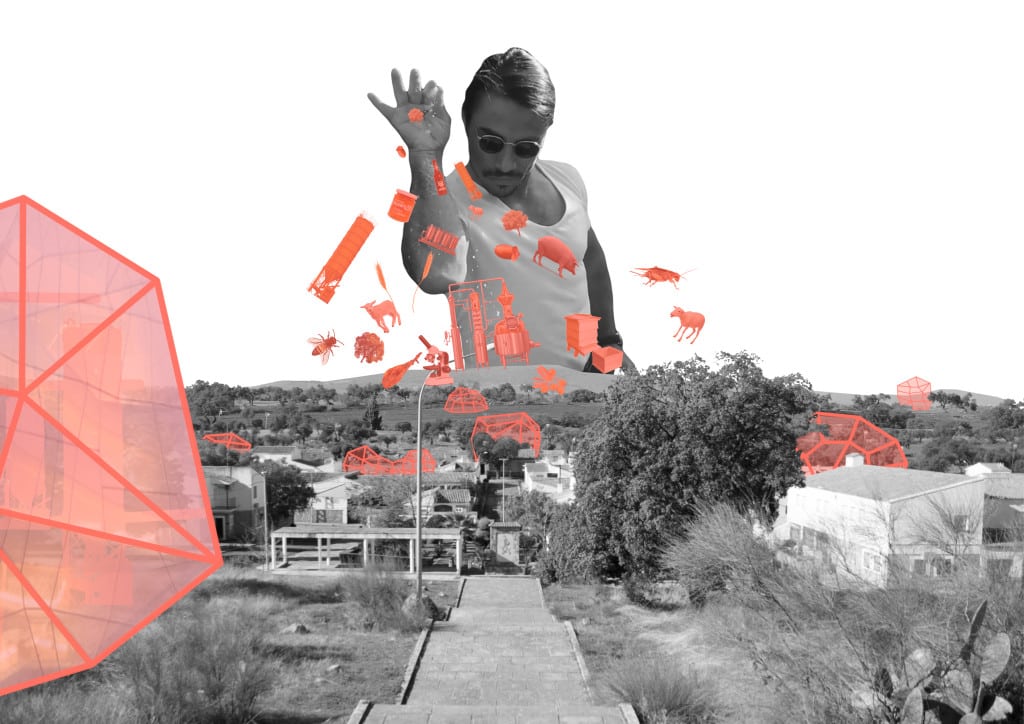 Rural Alchemy is an intervention project that transforms the landscape into holistic artificial natures, from hyper-productivity to third natures.
The project aims to challenge depopulation, an issue affecting the Spanish countryside, by retaining and attracting talent through providing jobs of diverse educational levels.
It achieves this by inserting techno-social productive methods within the existing artificial landscape, and proposing an amalgamation of synergistic programs for humans and non-humans.
The architecture acts as productive artifacts in which its shape is informed by performative aspects, generating bioclimatic devices, which enhance the production of the goods. Ultimately, developing regional cooperatives.
The location of these irregular diamond shaped artifacts is not arbitrary, as they catalyze the production surrounding them. The buildings are implemented physically and significantly along the entire landscape and urban settlement, generating a new discourse with the existing modernist architecture. This new discourse produces heteroglossia; richness based on the coexistence and conflict, with the objective of creating a new economic, productive, social and technological context, in the shape of a pictorial fantasy.
The final objective is to defy the notion of rural picturesque by inserting pop and performative architecture in this 98% of the remaining world. 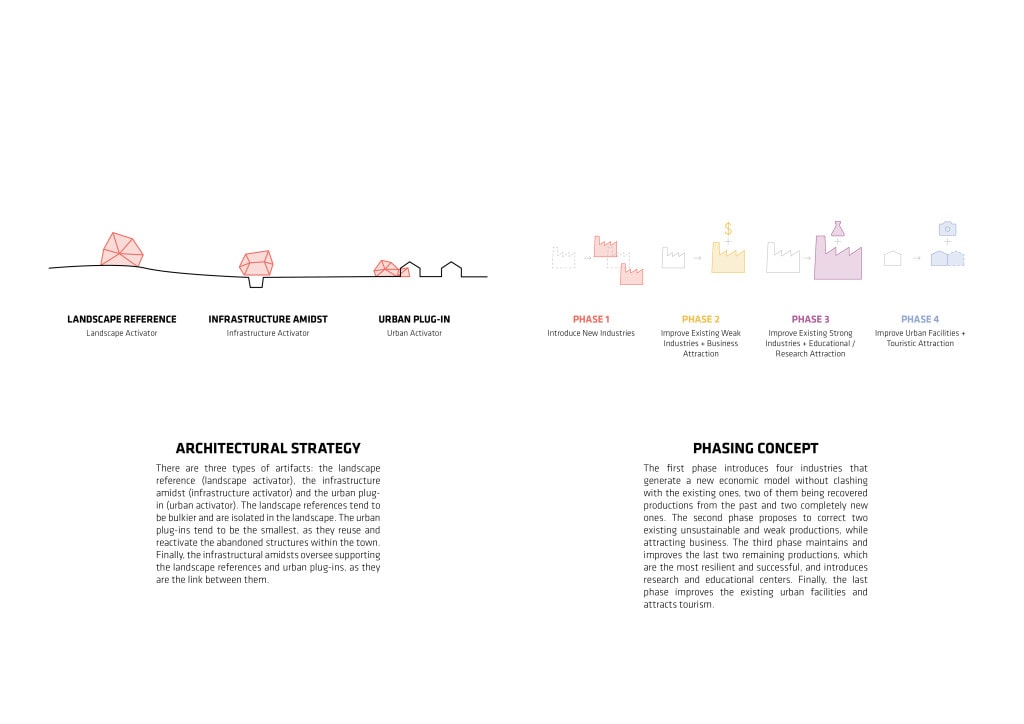 ARTIFICIAL NATURES
Rural Alchemy proposes to colonize visually the landscape, but also activating it for humans and non-humans, through productive artifacts in the shape of: landscape references, infrastructural amidsts and urban plug-ins. Ultimately, these artificial natures create an artificial ecological system, that incorporates the rules of manmade artifacts, with the evolving ones of the natures realm.
Technology is slowly invading every aspect of our daily lives, work and leisure. It makes every minute, every slight action productive. The proposed scenario involves introducing technology back again in the colonization town; just as in 1961, in order to radically transform the existing landscape into new forms of production, that extract and modify the resources in the area. 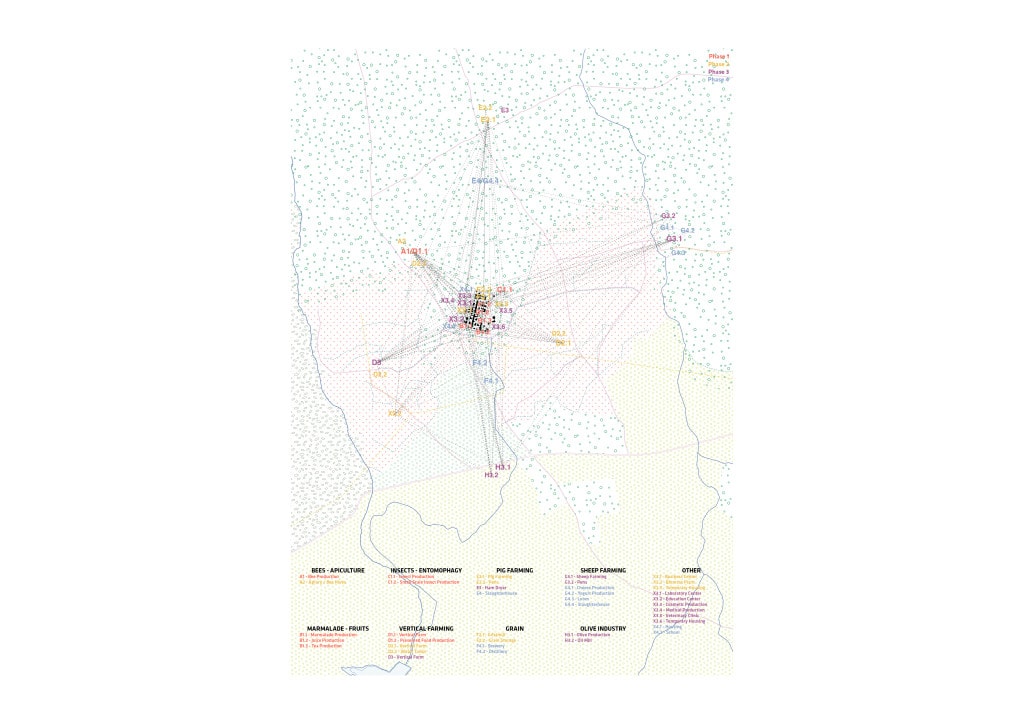 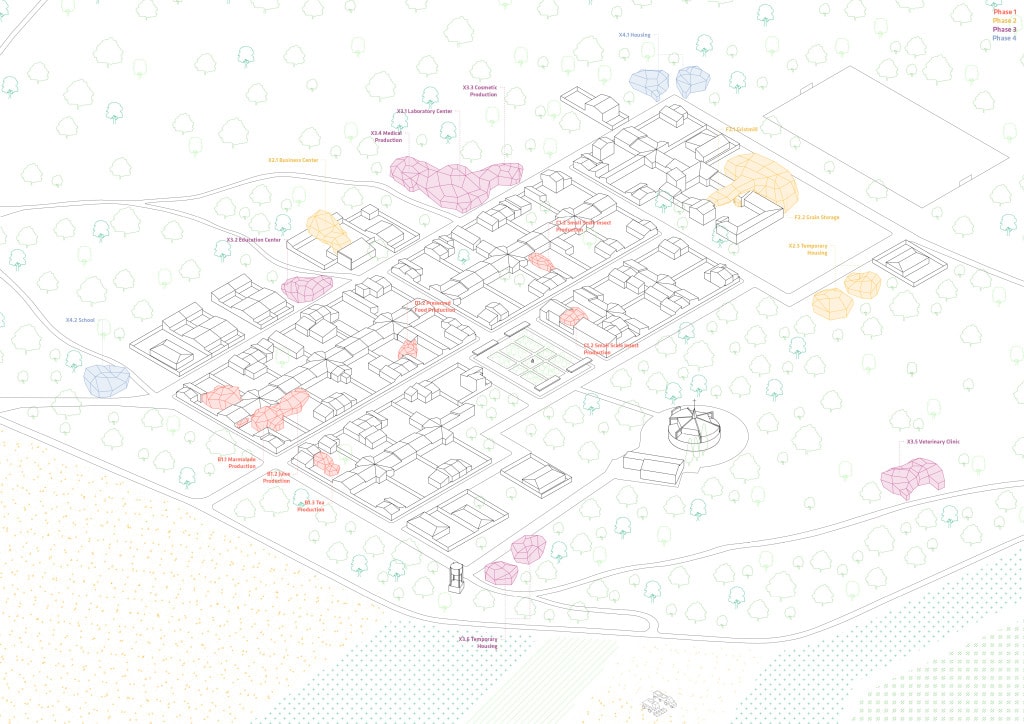 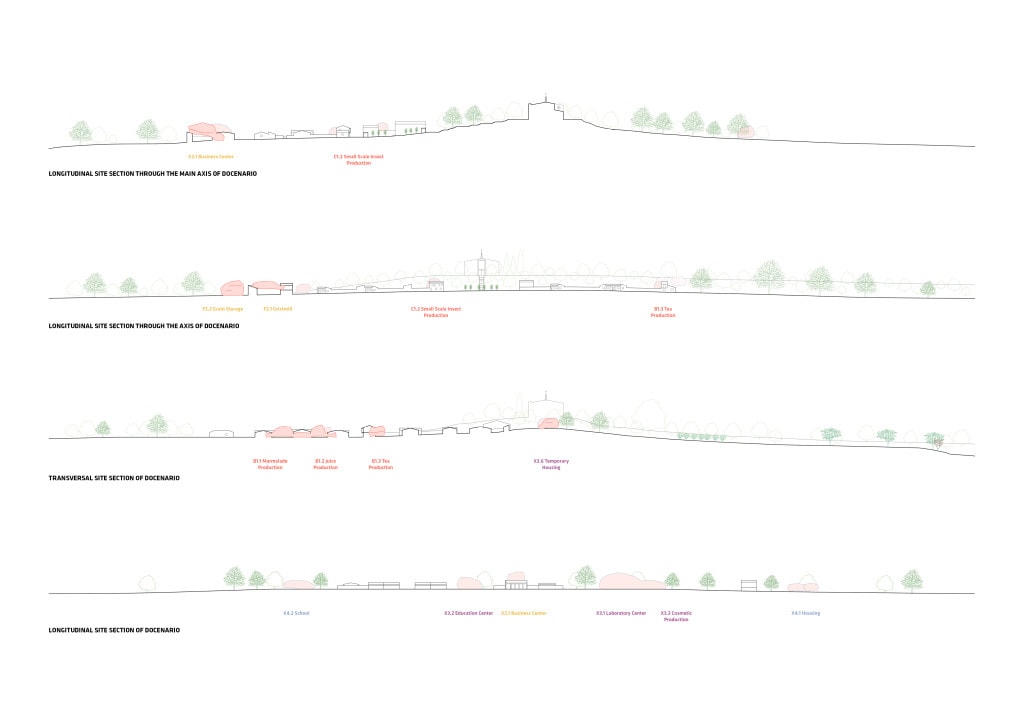 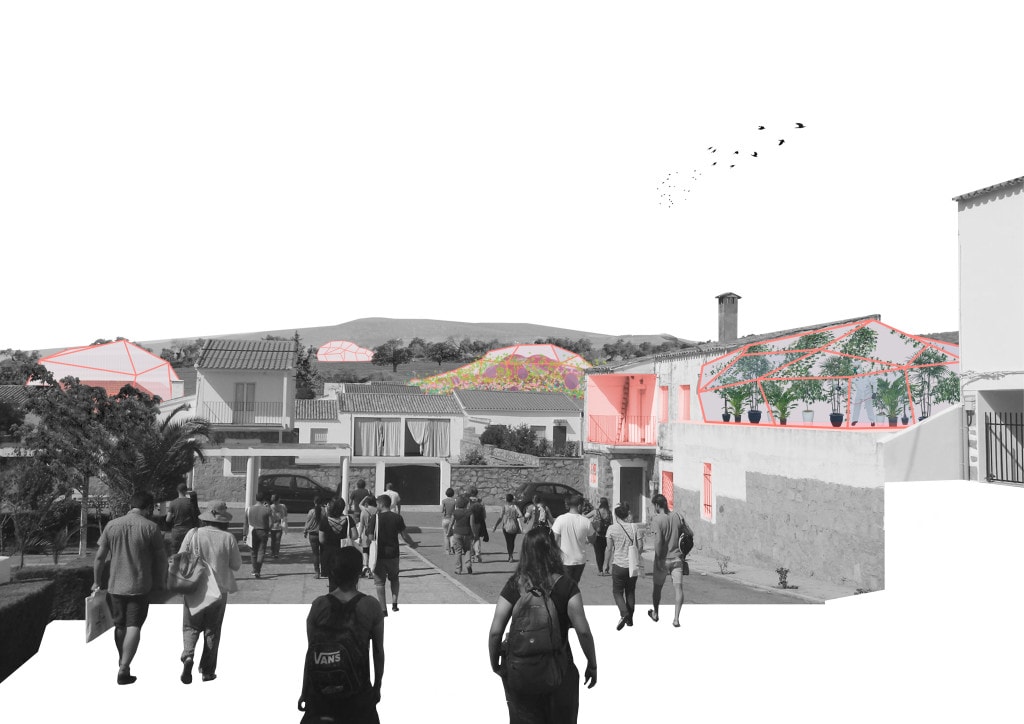 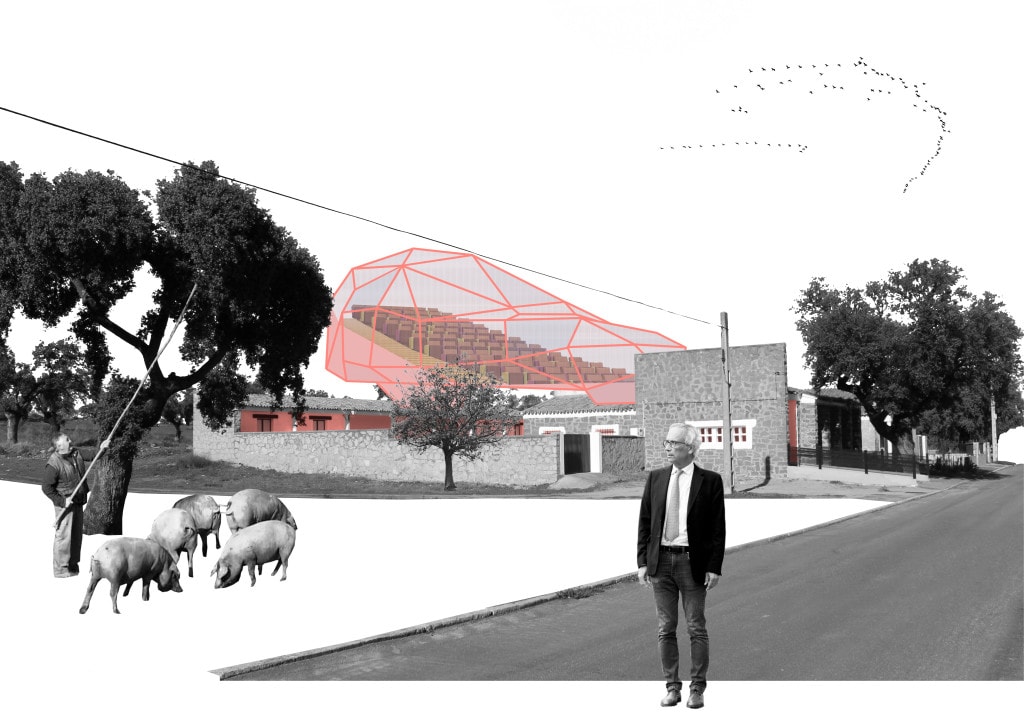 URBAN PLUG-IN
Urban plug-ins are one of the three types of artifacts found in Rural Alchemy. They are in charge of activating the urbanity of Docenario. These artifacts tend to fill in the gaps in the town, either by reactivating the abandoned buildings, or by occupying the unused plots. Urban plug-ins are generally small scale production units, with miniature structures to support the technified envelope, and lean towards having a minimal volume; set by the machines, in order to require less heating and cooling, in order to have a greater control thermodinamically. The new actors found within the urbanity will clearly contrast with the existing modernist houses, generating an new typology; the amalgamation of the white pitched-roofed houses and the productive diamonds. Both of these have very different architectural orders, the modernist being orthogonal and replicated, while the new diamonds are scattered unevenly and have unique volumes that relate to performance. 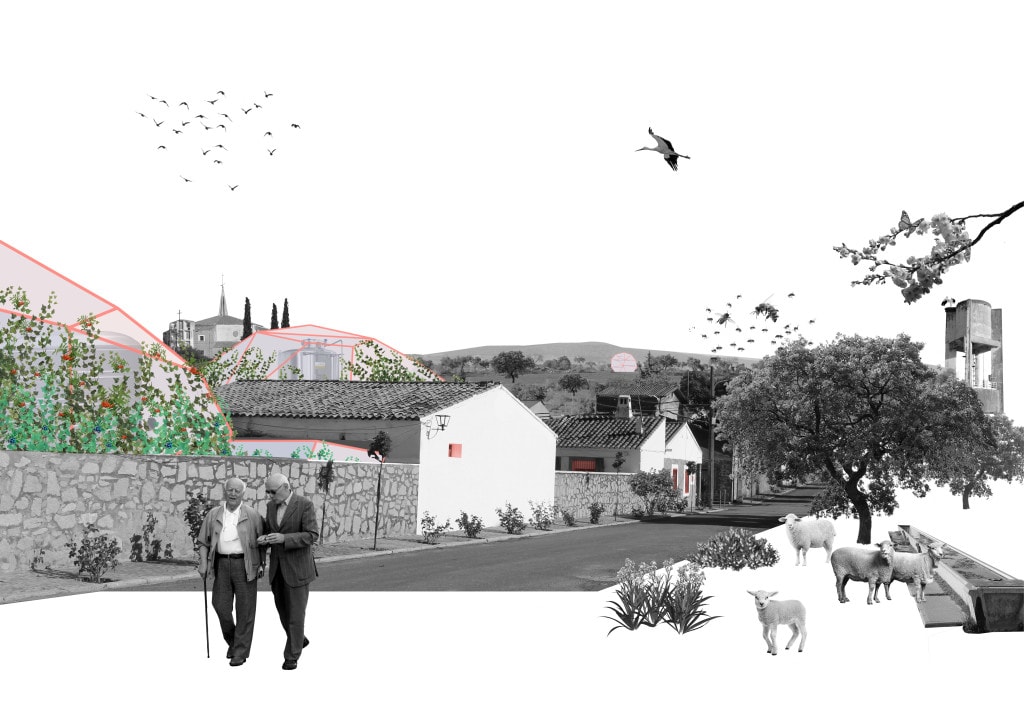 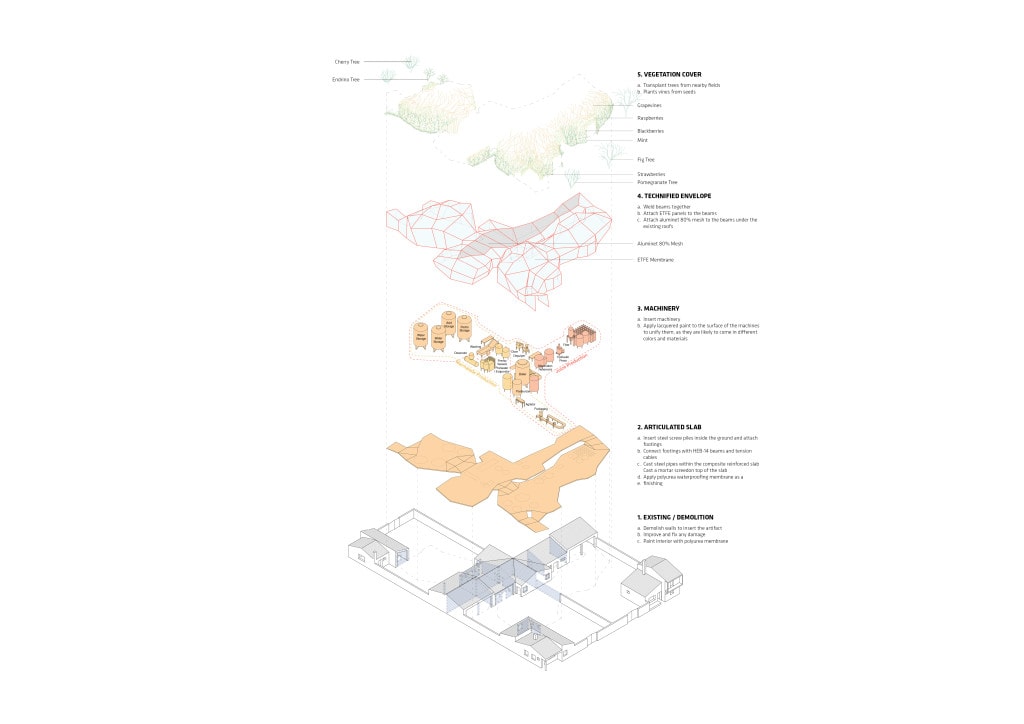 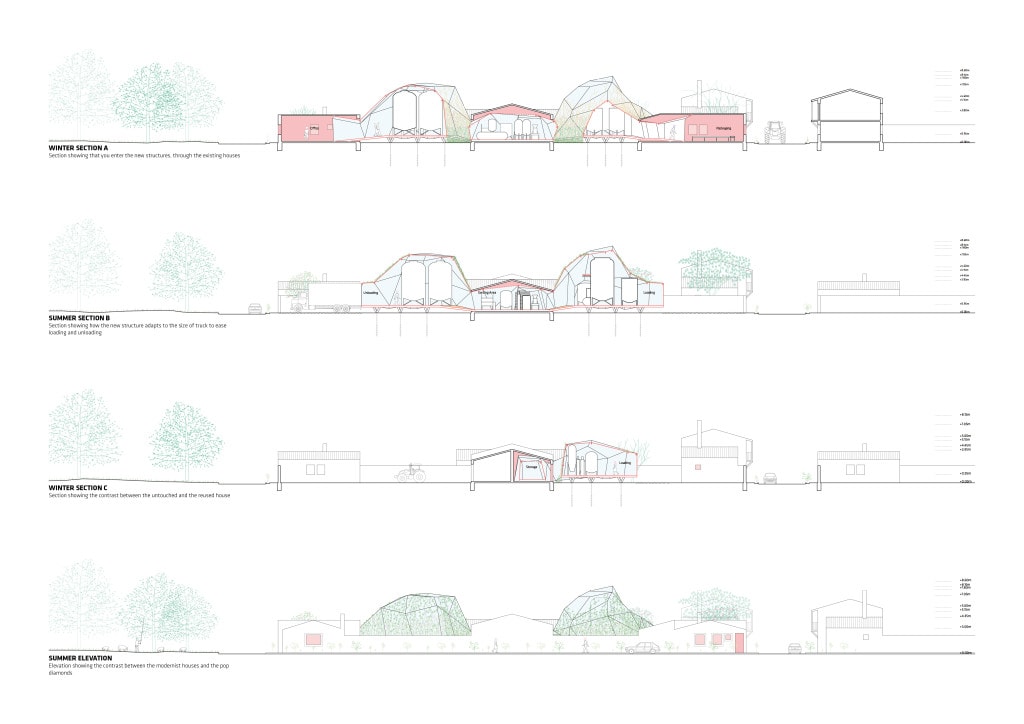 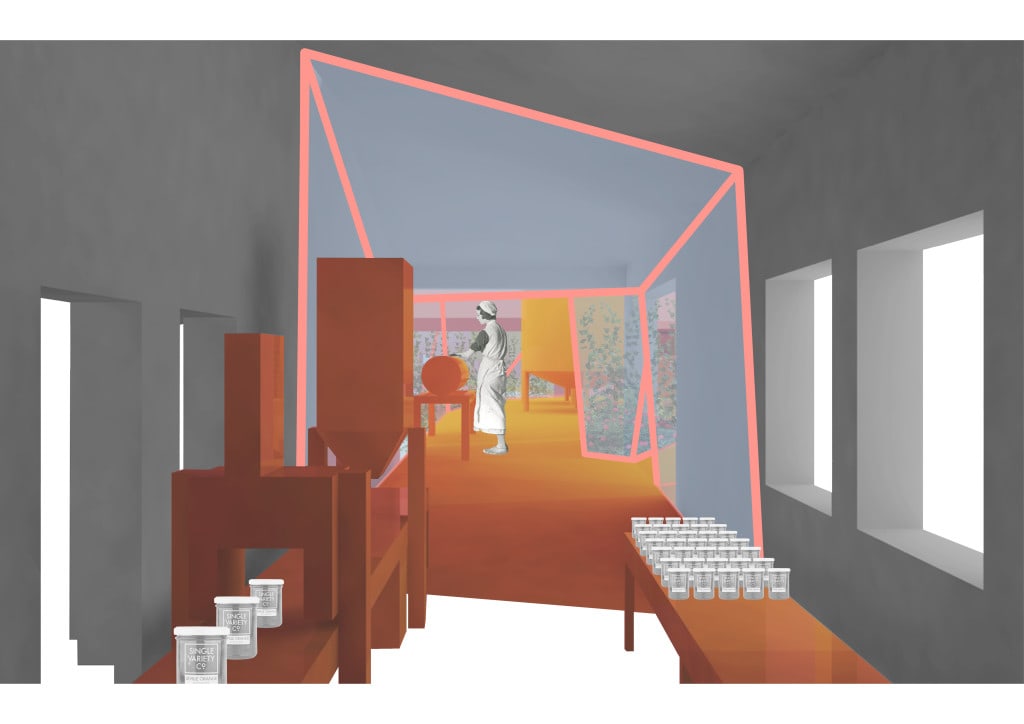 LANDSCAPE REFERENCE
Landscape references are one of the three types of artifacts found in Rural Alchemy. They are in charge of activating the productive landscapes surrounding Docenario. These artifacts tend to be large in size as they deal with extensive productive methods, and lean to be voluptuous achieving a point in reference or landmark as seen from the town, visually conquering this artificial productive landscape. As these buildings are isolated from the urbanity, they are thought to be independent in terms of energy and program, hosting their own offices, laboratories, storage and production spaces.
These new artifacts are placed across the landscape at their optimal spot for its own conditions to enhance them. For example, A1 + D1.1 (Bee Production and Vertical Farm) is placed at the minimum distance it can be from the town; due to the fact that it hosts bees, and oriented towards the nearby hills, which have the most diverse flora ecosystem in the area; to increase the pollination, but also to boost the production of honey. This building also takes into consideration the placement of the beehives; it houses them in the north facade, to provide constant shade, as they should be kept away from direct sun exposure, while the south facade hosts a carousel hydroponic vertical farm, shading the interior space inhabited by humans. 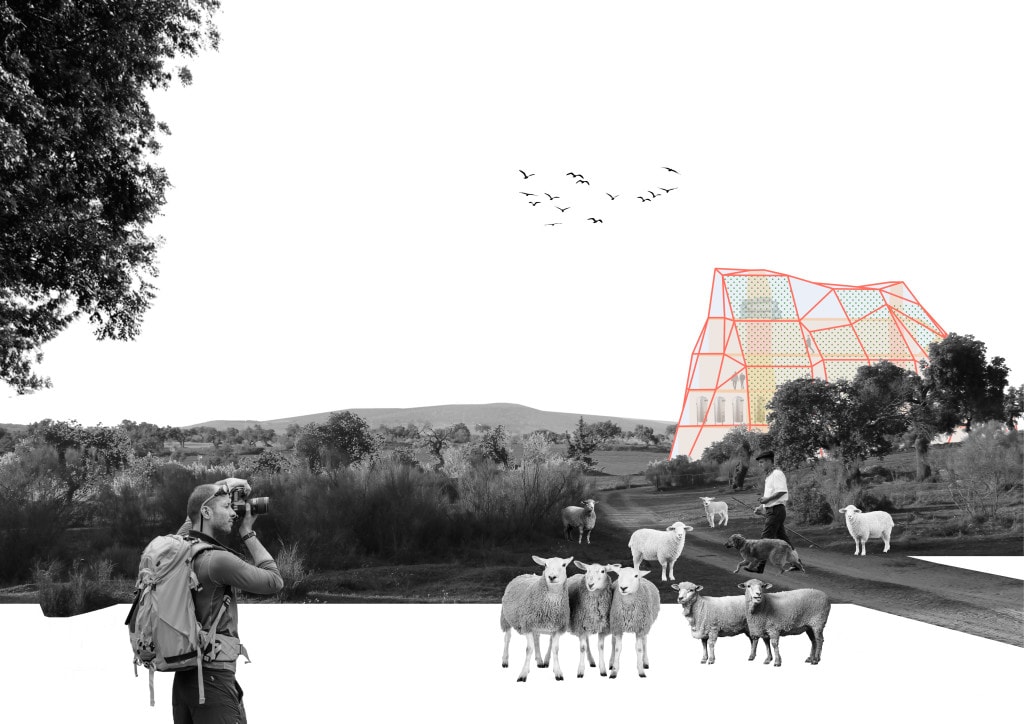 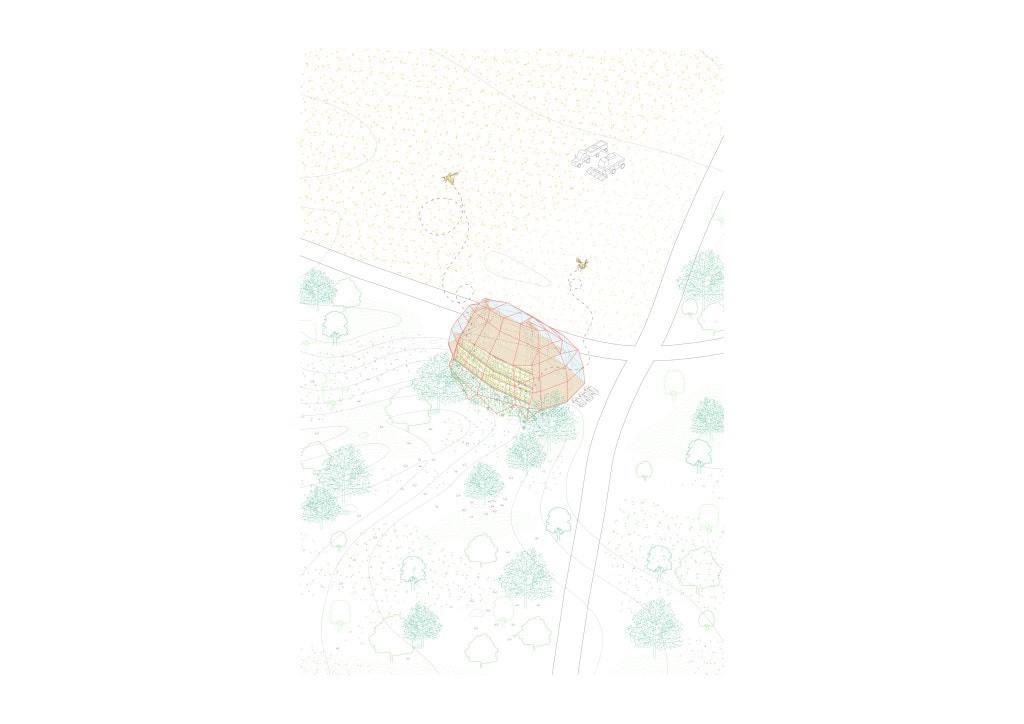 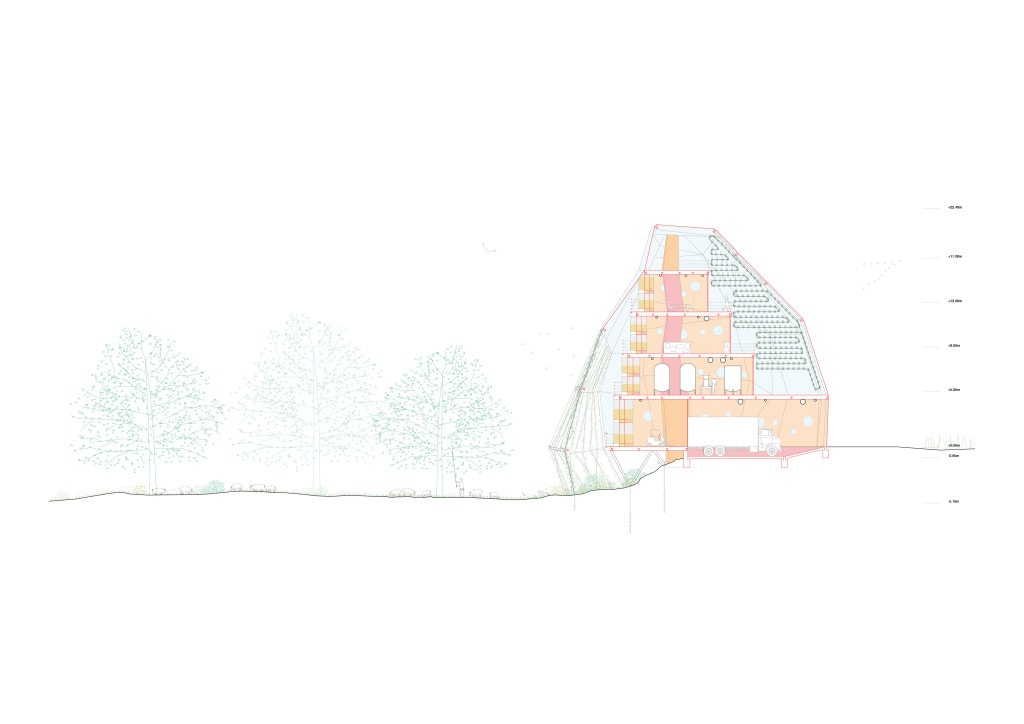 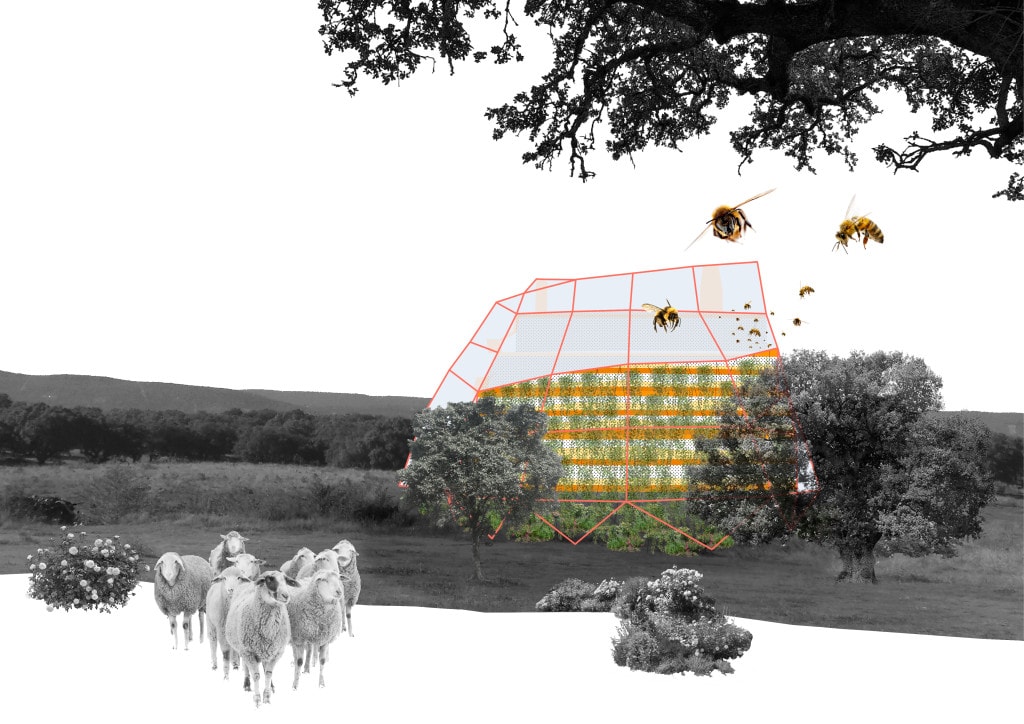 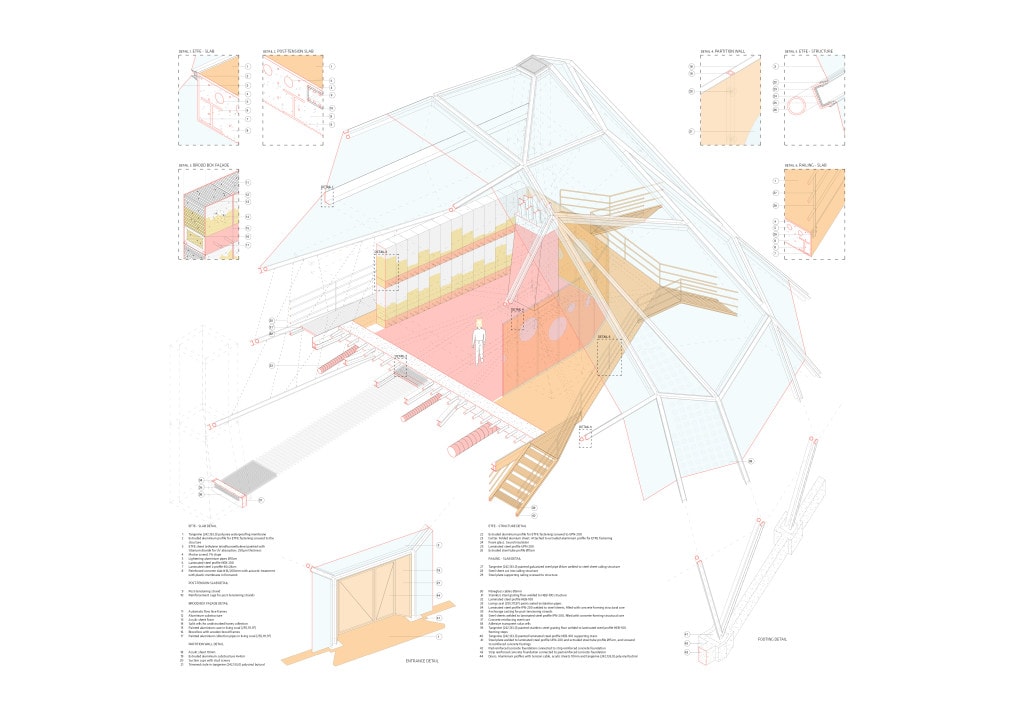 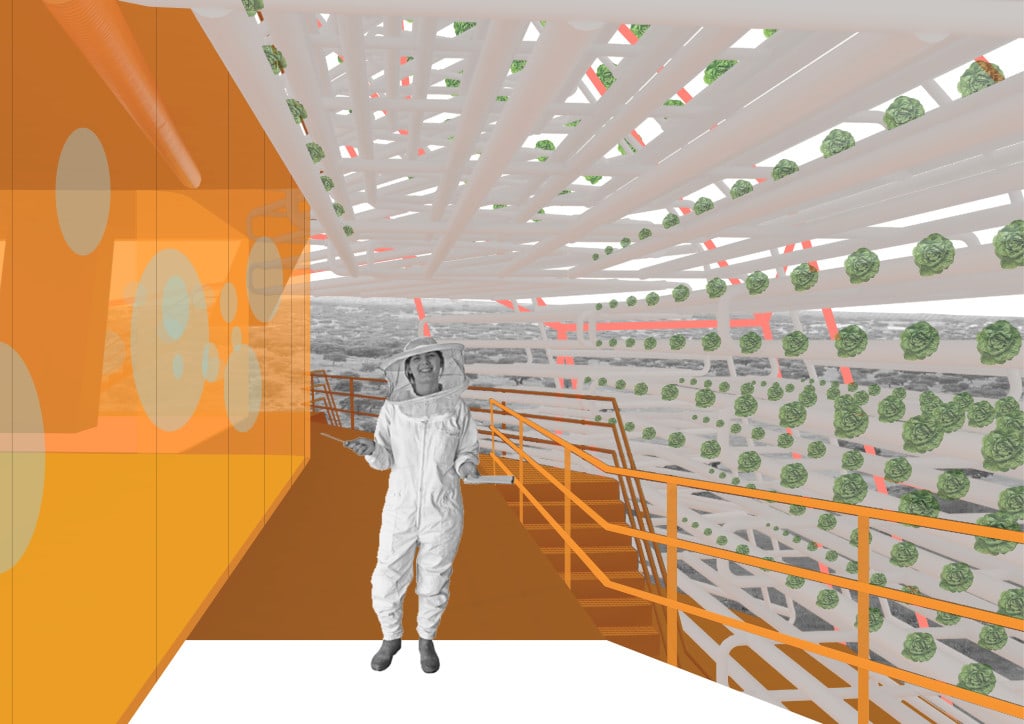 ENERGY
Rural Alchemy is composed of a series of artifacts where the shape of them is a materialisation of environments produced as a procedure in terms of thermodynamic and productive processes, in other words, a building is nothing more than the shape achieved by its configuration of energy: a technical system which uses the emission and capture of energy to induce environmental, spatial and visual effects. For example, A1 + D1.1 (Bee Production and Vertical Farm), is mostly formed by the maximisation of the south facade composed of two sets of angles, related to the elevation of the sun, to optimise the radiation towards the vertical farms, but also acting as a giant insulation for the human use rooms. At the same time, cores seem to dance, in order to balance the articulated slabs, but also providing each of the human spaces with a chimney used for cooling, reducing the need of energy consumption. 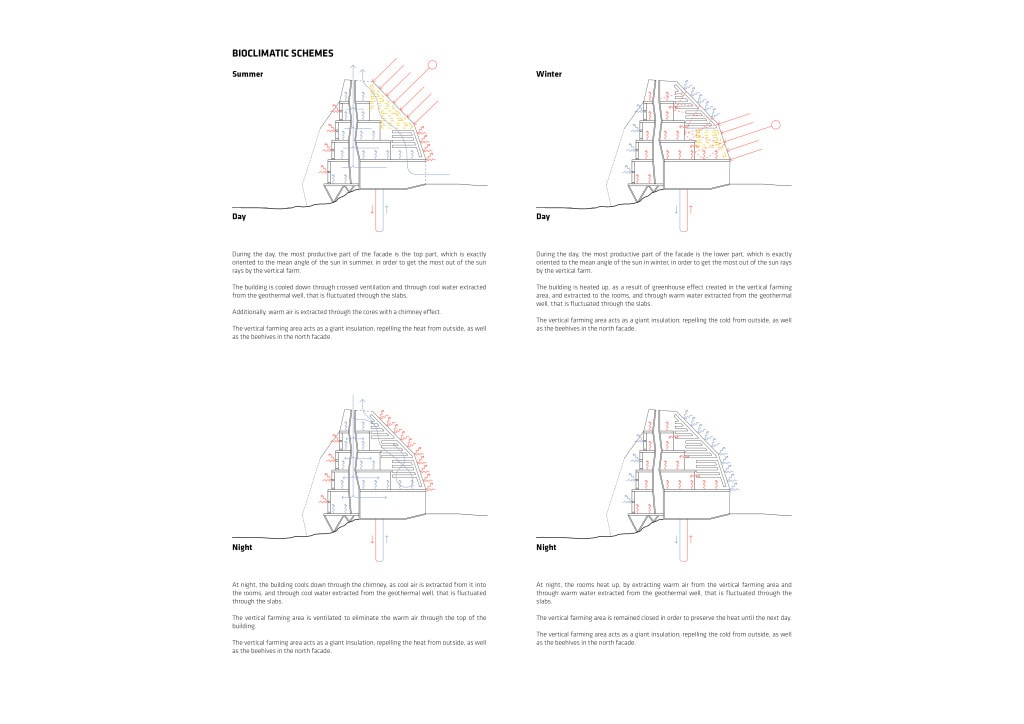