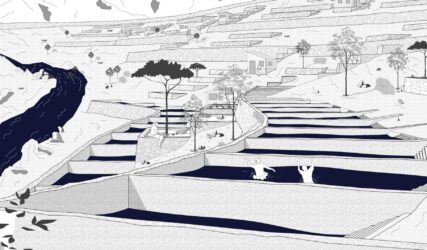 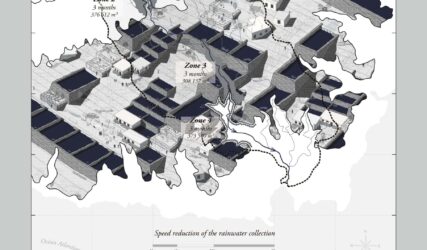 Water is a precious resource, alternating between abundance and scarcity. This paradox is particularly visible in Cape-Verde.

The basaltic soil makes the archipelago impermeable. Therefore, during the monsoon period (August-October), rain flows rapidly from the top of the valley to the ocean (5 hours only), causing damaging floods in the downstream capital, Praia, and limiting at the same time the re-fill of the ground waters. On the contrary, during the drought season (November-July) there is not enough water to provide for the population.

However, the rainfalls from August to October generate enough water for the inhabitants, their economic and agrarian development.

Four interventions emerge along the Trindad river in each of the climatic zones in order to take advantage of their specificities (Reforestation-Agriculture-Urban Development). Each intervention is a network of basaltic basins which tap the rainwater and slow down the flow by gravity for 3 months. This allows water to flow continuously all year round in the last intervention which distributes water to the population in the informal neighborhoods. Initially a flaw, basalt is transformed into a local resource to retain water.

This project does not go against nature and gravity, it accompanies this flow process by slowing it down.