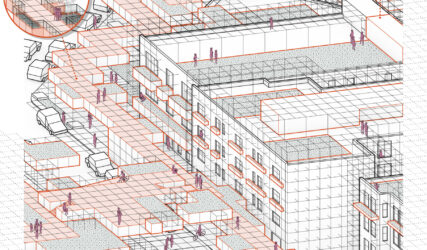 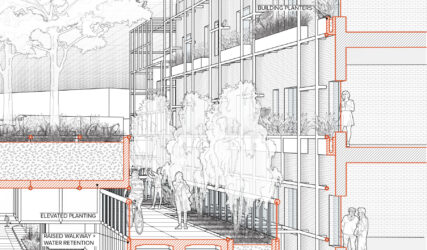 The city of Chicago has experienced heavier than average rainfall with four of the top five wettest years on record occurring after 2000. This increase in precipitation highlights the limitations of the city’s combined sewer system with just 0.3″ of rainfall causing flooding throughout the city. Of all the flood insurance claims from 2007-2014, 90% have occurred outside the 100-year flood plain, disproportionately damaging communities vulnerable to socioeconomic, demographic, and health disparities.

As the city’s population grows over the next century, a comprehensive system of water collection and redistribution will become necessary to accommodate the rising levels of precipitation. The solution manifests as infrastructure consisting of pipes and containers, reinforcing the formal grid of the city while promoting access to public space. This system encompasses the built fabric of the city, redirecting water to retention networks that reduce urban runoff and mitigate flooding caused by an overwhelmed sewage system.

The stratified composition of the infrastructure serves as an intervention in the traditional urban water cycle and prioritizes the natural resource as an asset. The raised circulation network and pipes slow, store, and re-use rainfall, making the processes visible to users, encouraging further water management and engagement.