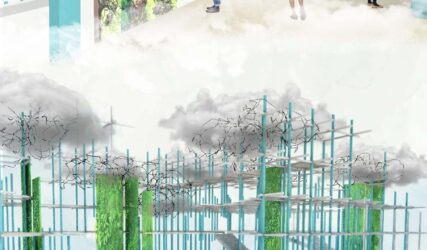 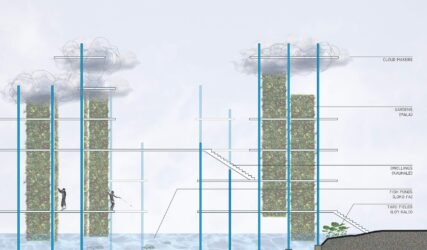 Located in the middle of the Pacific Ocean, it is hard to believe that the Hawaiian Islands can be part of a “waterless world”. Sea level rise will cause a lot of problems that will affect the Island’s source of freshwater due to saltwater intrusion into the aquifers. Climate change will alter weather patterns affecting agricultural production and cultural practices around water and crops.

Ancient Hawaiians relied on the Ahupua’a system to be self-sustainable, a system of vertical landscape segments from the mountains to the ocean divided throughout the islands to provide enough resources for its community. The Wai Pavilion is a system inspired by the Ahupua’a system, to provide its community with food, freshwater, and a leisure public space. The Ahupua’a has four main programs, Mala (gardens), Kauhale (dwellings), Lo’i Kalo (taro

fields), and Loko i’a (fishponds) which reflect the functions of The Wai Pavilion. The main feature that helps the pavilion achieve an ahupua’a system within itself is its ability to produce its own cloud within the pavilion providing freshwater to the crops and drinkable potable water for people in the community. Bringing back ancient Hawaiian practices through modern technology, Hawaii can be resilient in a “waterless world”.