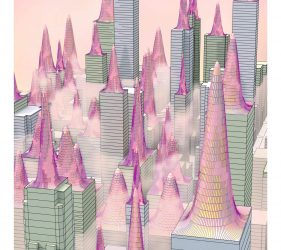 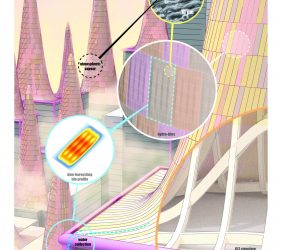 As global warming is well under way, global temperatures rise and in consequence the atmosphere can absorb higher levels of water. Humidity raises and causes a process known as ‘’water vapor feedback’’ which in turn worsens further the warming of the planet.

Taking inspiration from nature – and more specifically the Darkling beetle insect– our proposal magnifies the strategy of those tiny creatures to the scale of the city. Through the beetle skin surface structure, constructed of ‘micro-sized grooves and bumps,’ the insect has the ability to condense and direct water into its mouth. Constructed of ‘hydrophilic (water attracting) and hydrophobic (water repelling)’ areas, the skin of this beetle has increased fog and dew-harvesting efficiency.

The project proposes to enhance the urban fabric of cities with the Hydro-Hats in response to the high humidity levels. Hydro-Hats are timber structures topped with special hydro-tiles whose surfaces mimic the one of the darkling beetle.