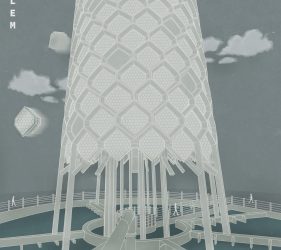 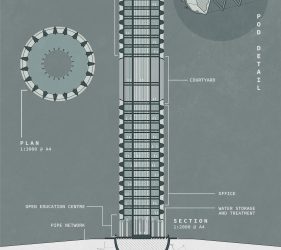 In the future after a catastrophic event that led to a worldwide water shortage crisis, a large group of surviving architects and scientists decided to collaborate in creating a new and experimental headquartered system that is a combination of water collection, water treatment, water storage, and an education centre that is automated and requires little-to-no human labour.

Named after a crucial part of the water transportation system of plants and designed based on trees, the NEUXYLEM releases fog-catching pods powered by drones into the atmosphere to collect water droplets on large scale. When the bladder inside the pod is full, the pod returns to the HQ. The collected water is then transported from the pods to the base of the HQ, where the water treatment and storage are located. After being treated, the water is then distributed to various settlements of survivors through an extensive pipe network hidden underground.

The HQ has an education centre at its base where visitors could learn the importance of water and a courtyard in the middle of the tower. Offices for administration purposes occupy the rest of the tower.