The project is located in Dubai, United Arab Emirates. Main reason of choosing this site is its climatic extremity. However, as a result of several research, more extreme features are found. 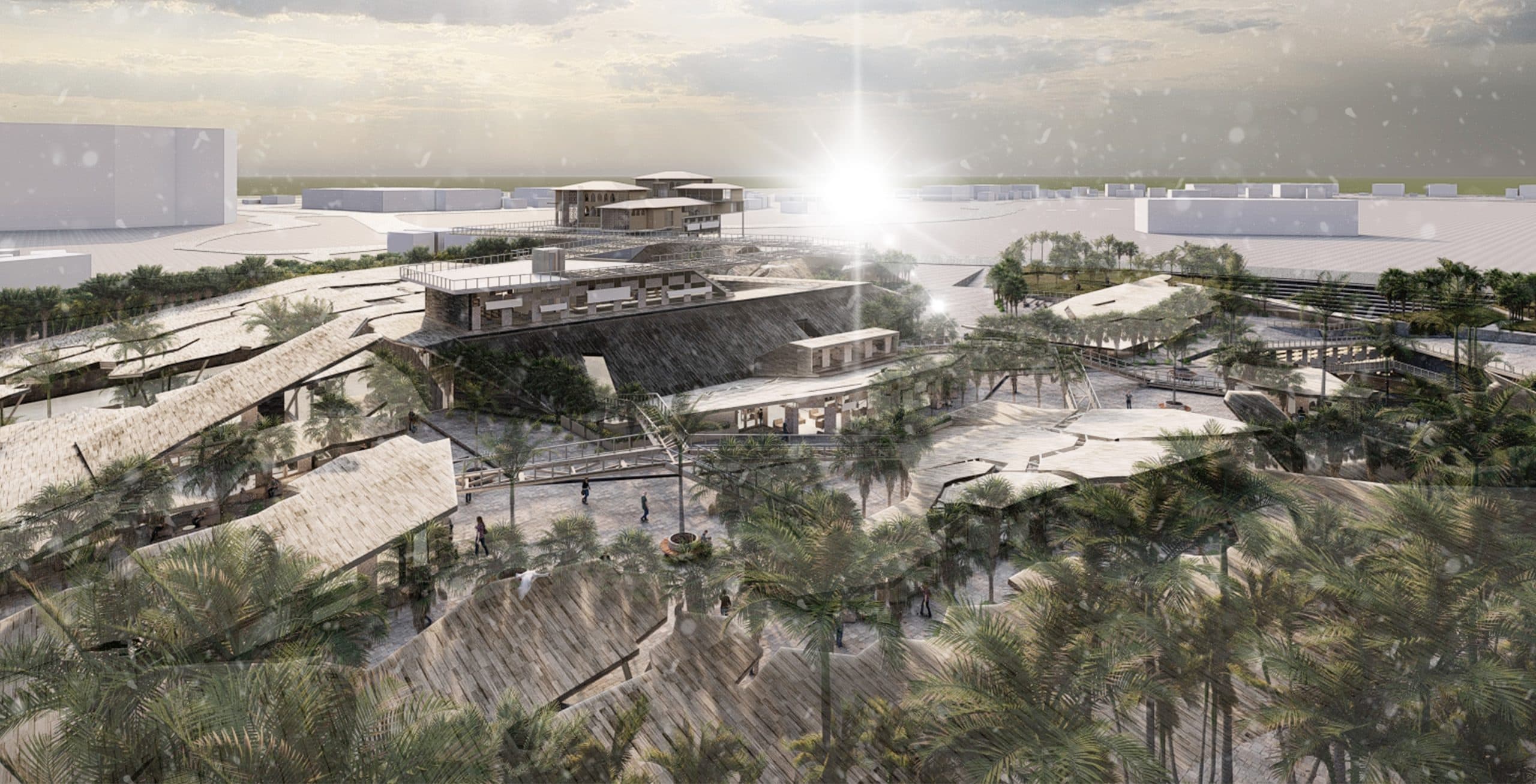 In recent years, consumption and construction have increased considerably in Dubai. The amount of buildings, do not match the traditional architecture of its local texture and cause damage to its identity, are increasing every year. Hence,

1- The evolution of building typology from “Islamic Architecture” to “skyscraper architecture”,
2- Local traces of the city that existed in the past are being erased and its identity is damaged

Have also been defined as extreme. It has become the main goal of the project to react to all these extremities, to seek answers to them within the project, and to shape the foundations and fiction of the project over these existing problems.

The main reason for choosing this region as the project area is the “Creek Harbor” Project located right next to the site. Creek Harbor becomes the representative of all this glamorous and consumption-based fake world because of the “Creek Tower”, which is now the tallest structure in the world. Therefore, in order to react to all this “fancy” world, it is defended that the project should take place in that “fancy” world. In this way, although they are designed for the same place, they have two completely different perspectives, which highlight those that it is tried to do it in the project and strengthen its context. 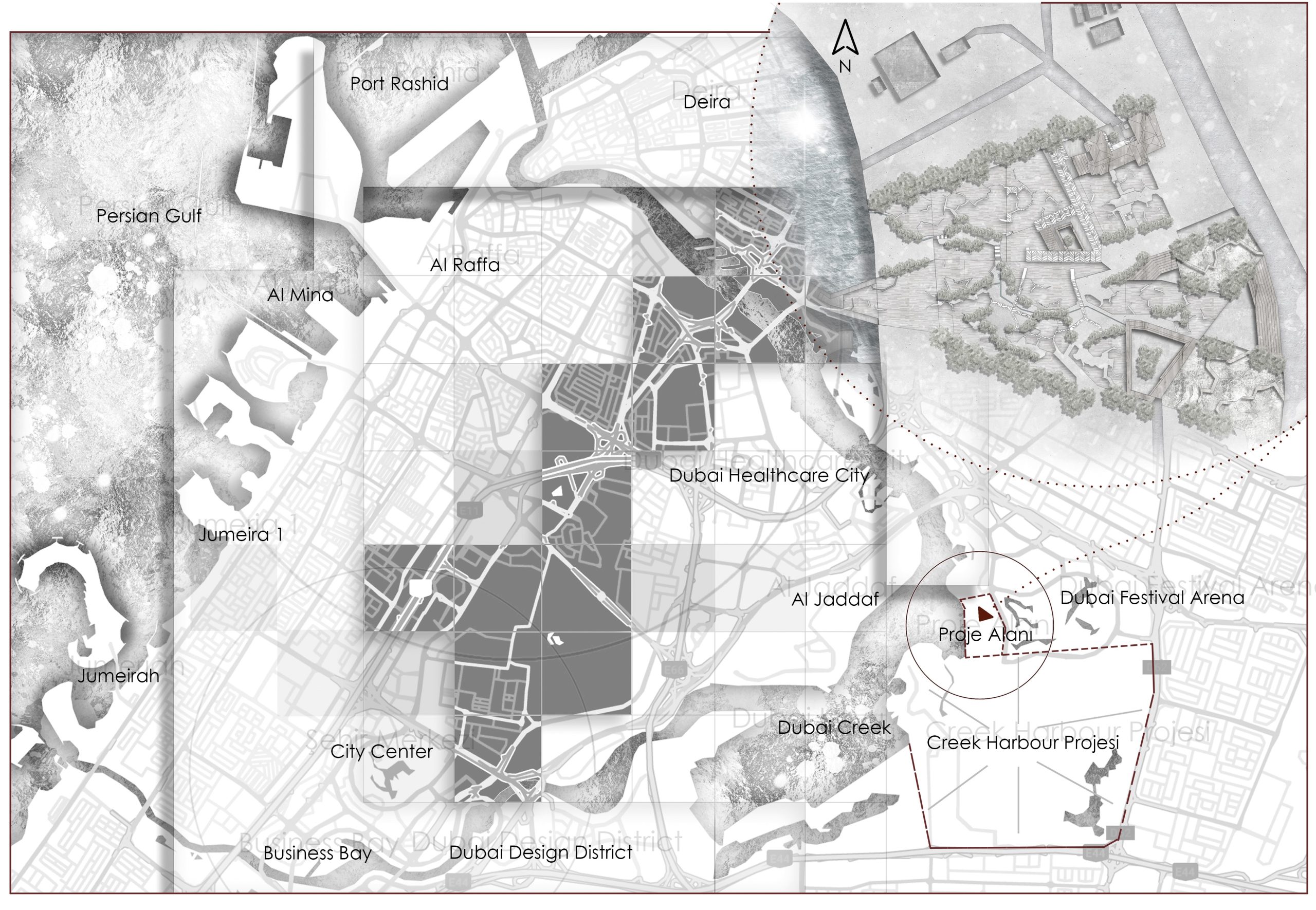 It is aimed to response and react to all these extremities in three manner: climatic, architectural and technical. The architectural response shaped the program and concept of the building. The program is aimed to respond to all these extremities. The building typology in Dubai mainly consists of shopping malls, entertainment centers and magnificent hotels.To react to all this consumption, the best response is having the same program as those structures but designing it with completely different approaches. Thus, typologies of Dubai’s old markets and bazaars are researched and the configuration of the building is shaped by the traces of the old local texture. It is aimed the building  to work horizontally like the old passage typology and remind the old silhouette of the city. 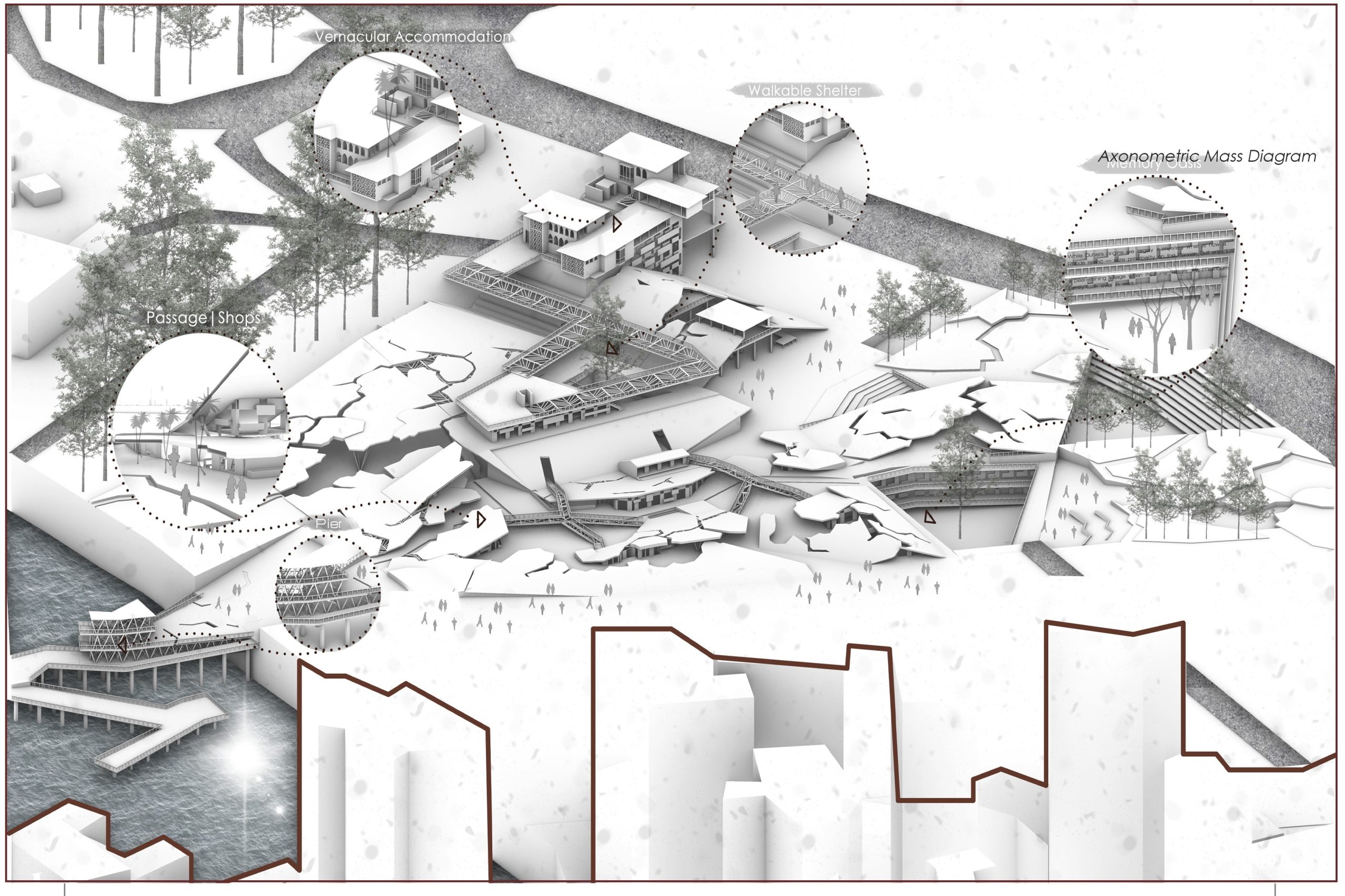 The structure of the soil has been studied as a metaphorical idea. The natural cracked texture of the soil is seen in arid climates. This natural cracked texture is cracking due to lack of water can also be seen in Dubai. The following question is then studied: “How can this entire passage remind of a cracked soil when it is viewed from outside?” Designing this whole structure in a crack typology is the first important decision made in the project. 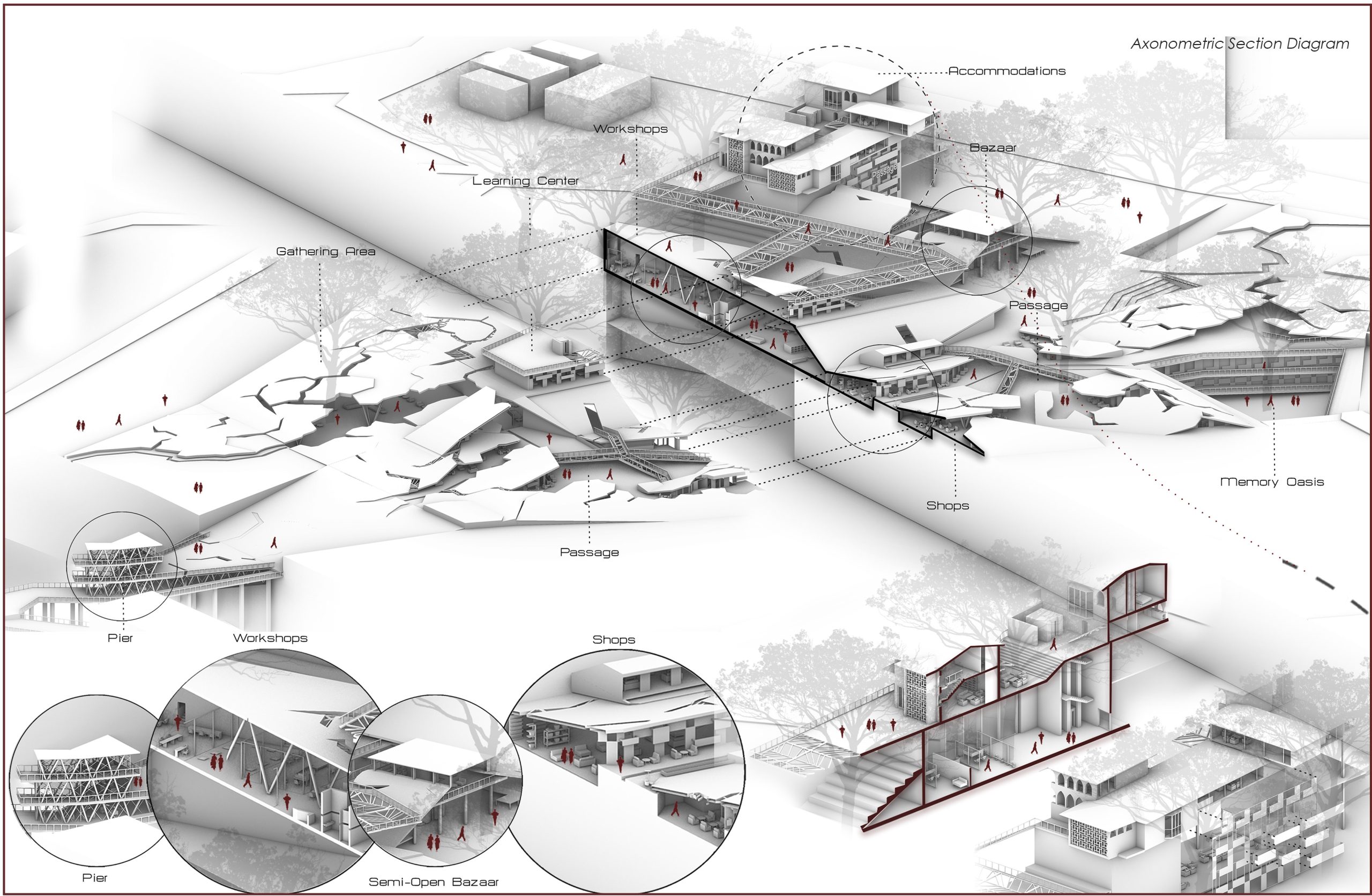 The idea of ​​”oasis” is studied in order to mature the program of the building. Oases are the first places where water appears in the desert; and if all this broken crack represents a drying earth -or desert- some of the burried spaces in this desert should also represent oases. Therefore, these areas, which are represented by partly burried in the building, metaphorically represent oases that have different functions. Some areas are buried in the building and some areas are also elevated. The point of this is that if this whole crack behaves like a soil then the elevating places will act like the flowers that bloom through that soil and first appear in the desert.

The basic approach in material selection is to use environmentally friendly materials with high energy saving performance due to the extreme temperature in the region. They are also local ingredients produced in the city. 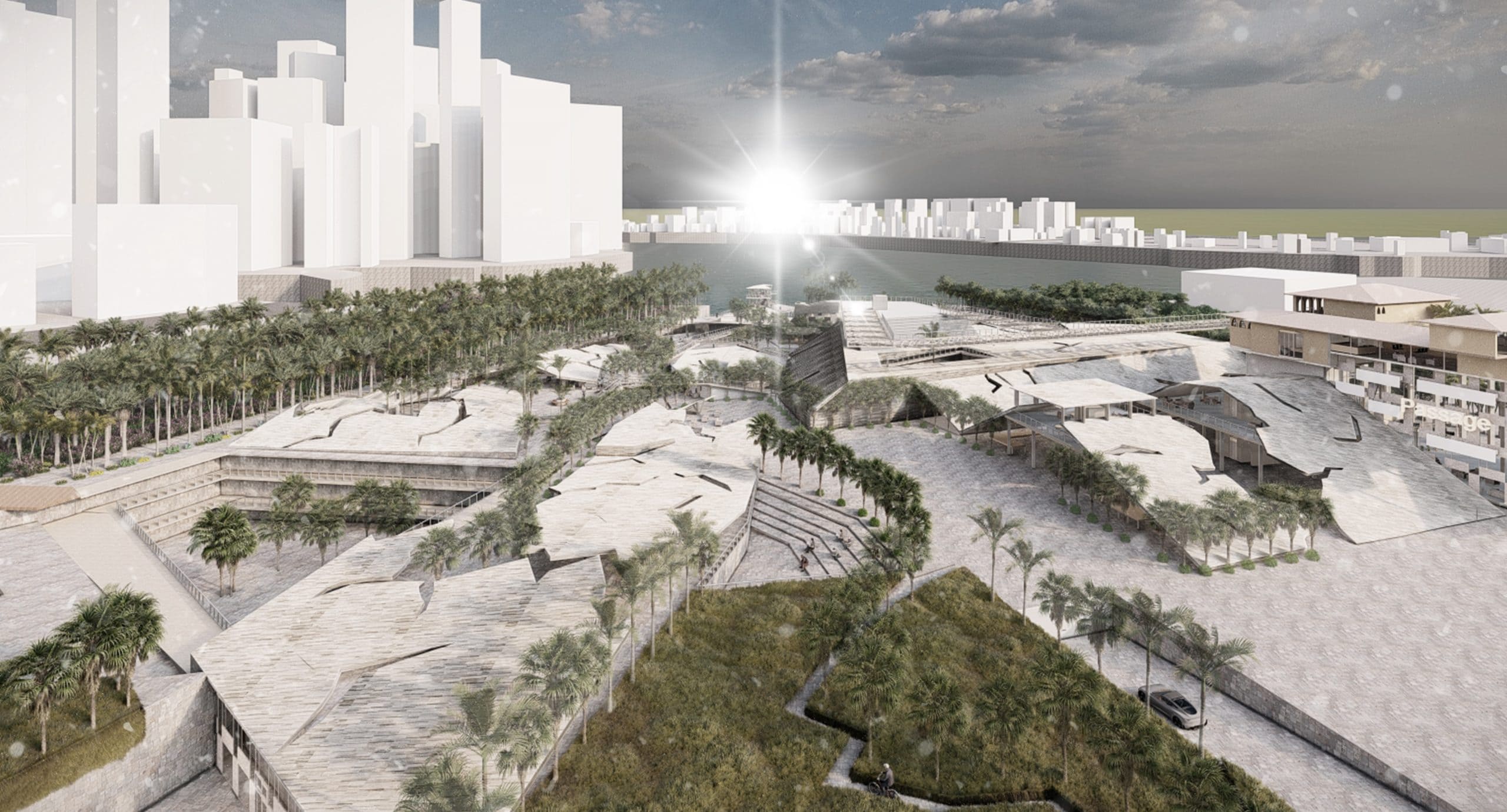 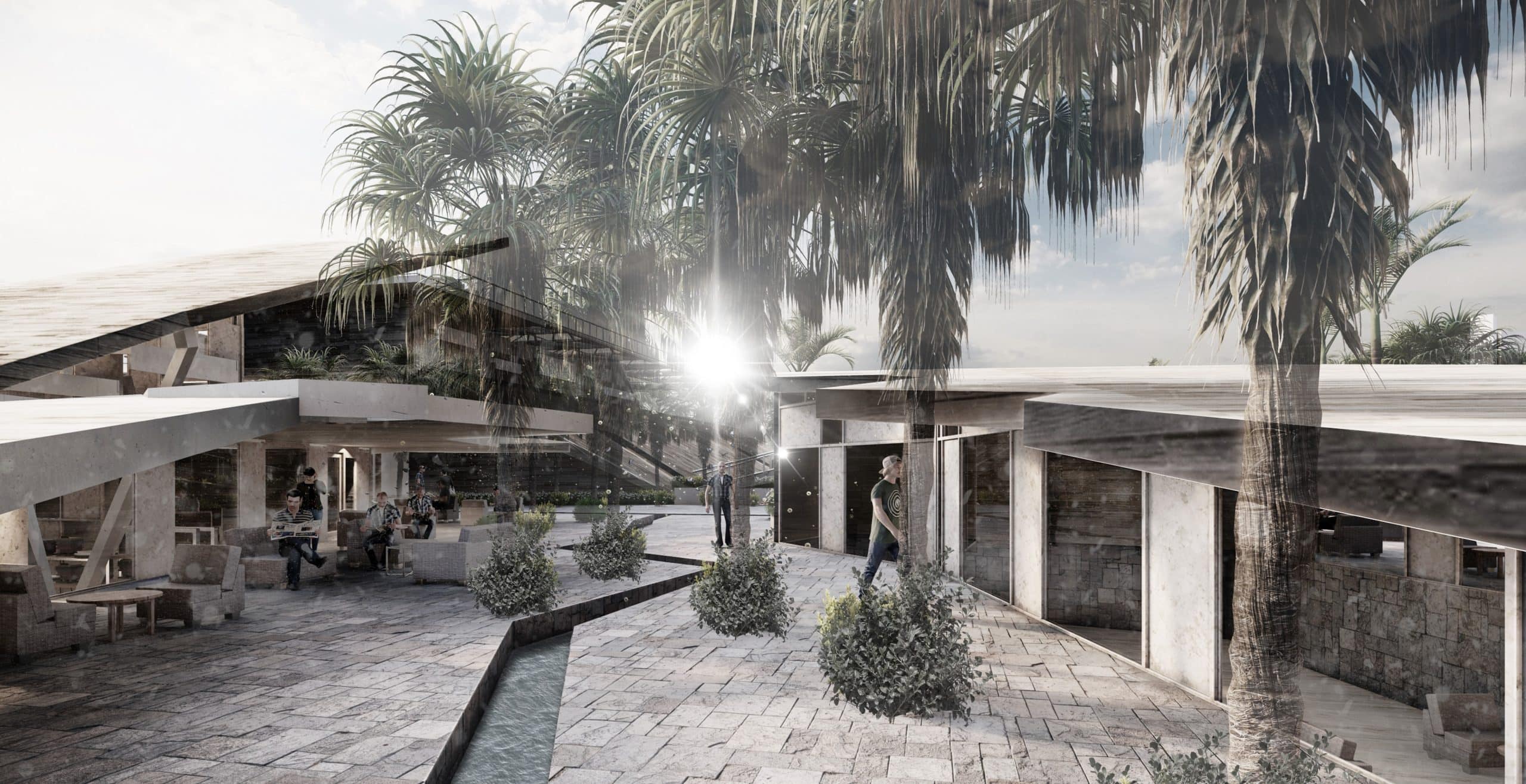