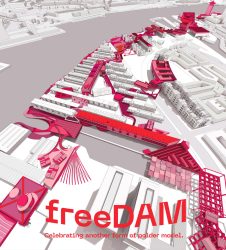 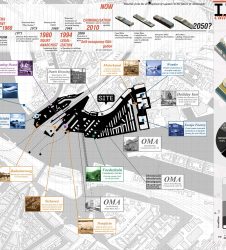 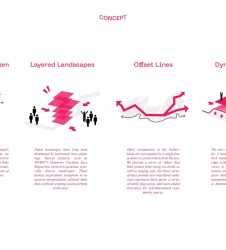 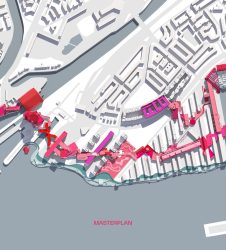 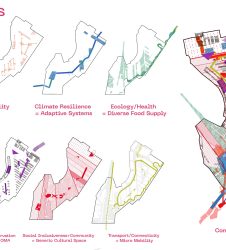 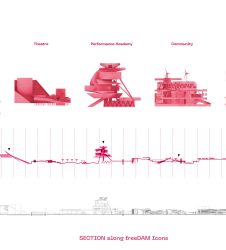 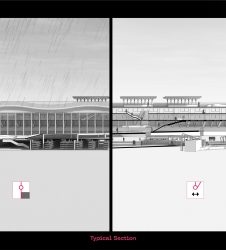 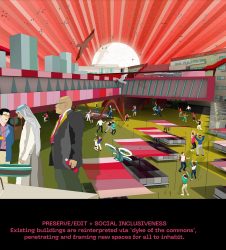 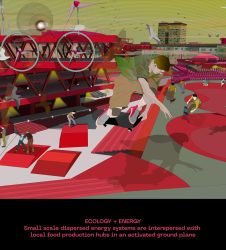 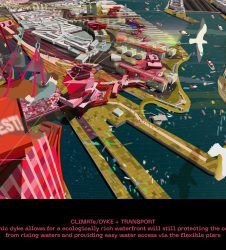 “… the best way to see the way forward, is to look back at where you came from.”

In the Dutch context, top-down has long framed the bottom up. Dijks were lines that formed collective protection, which allowed for great individual freedoms. Close proximity to water led to international colonization. This ultimately led to international industries and factories. Ultimately leading to abandonment and squatter culture. Post war housing needs paved way for projects like OMA’s minimalist linear housing models. These lead to the desire of citizens to express themselves in public spaces.

Layered Landscapes – Dutch landscapes have long been dominated by horizontal rows plantings. Recent projects, such as MVRDV’s Hannover Pavilion, have flipped this vertical to generate vertically diverse landscapes. These formal inspirations transform to be open-to-interpretation cultural hubs that celebrate existing societal trends in the area.

Offset Lines – Often communities in the Netherlands are surrounded by a single line of dykes to protect them from the sea. We provide a series of ‘dykes’ that both protect from rising sea levels as well as surging seas, but these series of lines provide new waterfront walkways and micro ferry ports; a series of public play areas, and open-ended structures for self-determined community spaces.

Dynamic Dyke – The new waterfront interface allows for 3 benefits at once – a return of lush natural habitat to the water’s edge, a lifted pedestrian walkway for views to the city, river, and new nature, and a series of flexible micro piers that and fold out to link to autonomous ferries linking to historic Amsterdam as well as the rest of Amsterdam.

In response to the five calls to action by the brief we have five specific answers. We also add a sixth key element – transport – that we felt was missing from the mission brief.

– Sustainability = Energy: The Dutch have a long history of harnessing the wind. We suggest a dispersed array of micro-wind turbines. These allow for adaptability and small scale, adaptable, self-sufficiency.

– Climate Resilience = Adaptive Systems: Current trends within Dutch climate adaptive strategies allow ‘room for the river’. We extend these principles of designing homes to allow for occasional flooding and provide layered protections that generate generous community facilities for all.

– Ecology/Health = Diverse Food Supply: The Netherlands is notorious for its massive greenhouses and less known for their ‘Volkstuinen’ [community gardens]. We introduce these peripheral concepts into the urban core of the city. Firstly, by creating vast underground spaces for growing plants via UV grow lights; and by leveraging under used rooftops for community gardening.

– Regeneration+Preservation = Learning From OMA: Rem Koolhaas [in]famously said ‘fuck context’, but then went on to have his team playfully reinterpret modest heritage spaces in Fondazione Prada. We too maintain the majority of OMA’s project, but bluntly cut/edit/paste new spaces to re-read the existing.

– Social Inclusiveness+Community = Generic Cultural Space: We provide a multitude of spaces both literally underground, lifted and unprogrammed, and emergent existing cultural nodes for all to inhabit and reinterpret collectively.

+ Transport/Connectivity = Micro Mobility: The community is adjacent to a massive waterway as well as some of the biggest train hubs in Europe. By providing micro-autonomy pods, self-driving boats, and flexible piers this community can link to extensive transit flows, distant countryside’s, and all right at their front door. 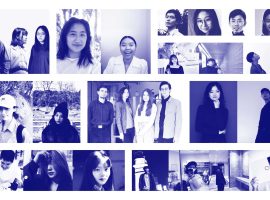 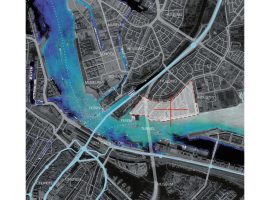 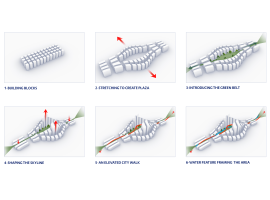 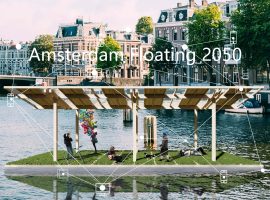