MORPHO- TECTONICS. References to the shapes in nature. Tectonic and morphological dimensions.

Specific objectives:
1. Introduction to basic tridimensional design principles focusing on the exploration of implicit and explicit laws for the formal organization of the space-object.
2. An approach to the understanding of the physical nature of materials and their geometrical-structural possibilities in the definition of the architectural space.
3. Introduction to the knowledge of natural appications which may have an impact in the definition of architecture´s space, structure and material consistency.

The aim is to introduce students to the management of crafts and skills considering that formal determination is a process closely related to specific materials nature with their physical features and also to the appropriate techniques, to labor, to technological availability and to the space concept associated with functional, cultural and symbolic issues.

It proposes an exercise that aims at training hands´intelligence at the pre-project stage but resorting to the speculative field of abstraction, that is to say, speculating by thoroughly observing and acting until new relations come up.
Finally, it attempts at taking this first artifact as the initial material for future accumulative transformations which by adding successive variables will build up the final project. In other words, this primary paper appears as a personal research on tectonics and space which will undergo further adaptations (distortions, scale changes, fragmentations) as to the place, the body´s dwelling, the symbolic dimension and the functional demand of the last paper.

A tridimensional construction and design of a object-space at a scale of 1:1 with a size of approximately 50cm x 50cm x 50cm from the management of materials and techniques as well as the composition laws and their variations in space. Organisms or parts of them will be taken as initial material to induce the student to the knowledge of implicit organization logics and the natural applications that may affect the architecture project.

The shapes of nature are related to a dynamic synthesis of the differences among forces, densities, temperatures and pressures. These differences give form and trans-form living beings through time. If there are no differences, there is no life. For instance, in order to grow, a tree needs to penetrate the air as efficiently as possible with a force opposed to gravity, its dendritic shape resembles that of a river breaking the territory; a fish needs to develop a certain form and surface (scales) that allow it to go through the water decreasing friction; a body needs a skeleton to stand up, the skeleton grows and is deformed as the organism grows; smoke has a spiral movement or vortex generated by the different densities and temperatures of the air; the genetic evolutions of the organisms are in addition trans-formations of adaptations to new conditions; the shapes of the dunes, similar to those of the sea waves are the result of the action of two opposed forces (that of the wind on the crest and the resistance beneath). Nature´s shapes, geometries, organizations and trans-formations have historically been an endless source of knowledge to understand the forces that act and shape organisms, and therefore, could illuminate the way to conceive architecture.

School of Architecture, Planning and Design. 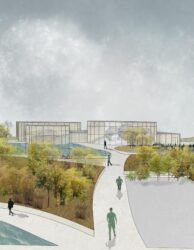 Windows to a landscape: point of origin 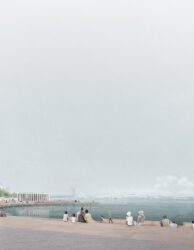