THE HOLY HOLES, a sacred city 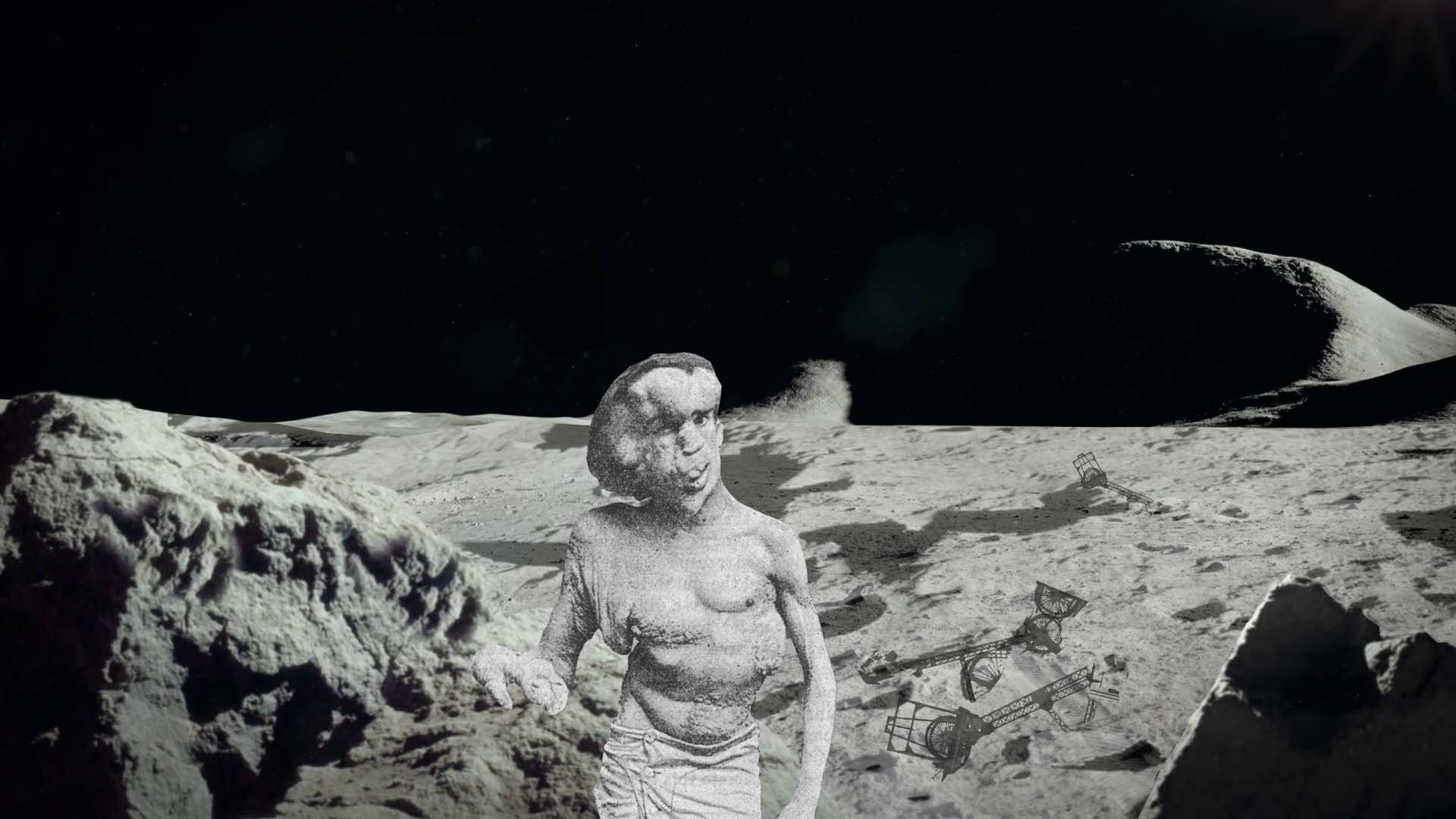 “One day a man heard a thud. In the distance, a cloud, like a mushroom stretching towards the sky, seemed motionless. It was not. Its wobbly head widened on either side, and as it grew larger, its huge body of smoke flashed and changed colour, becoming red, yellow, purple. It grew larger and larger, bubbling from the inside out. Then man felt an intense wave of vibration pass through him and for a moment the light seemed to emerge from the bowels of the earth.Then, a gigantic ball of fire spread, implacable like a divine wrath. During its ascent, the colours changing from deep purple to orange announced the elemental force which, after centuries, had finally come into the world. It was as if the Earth had split in two to finally let emerge from its depths, the Ultimate Energy that was to be.
Fascinated by this event, he(man) chose to embark on a journey towards it without really knowing where to go or when he would arrive. He went through cities where people seemed indifferent to this miracle and plains where nature seemed untouched but there it was, the Ultimate Energy, all around. She had come into the world to embrace it like a mother reassuring her child.
After several days of wandering, he met other people who, like him, had seen what he had seen. Little by little, the atoms came together to give birth to a society in search of its sacred city.
The landscape had suddenly changed. They were now in the vastness of nothingness which was, from time to time, broken by ruins, a sign of the Force. At sunset, they found the traces of a memory of the past. In them, an echo of transcendence had passed through them at the entrance to this deserted area similar to that of the first day. They saw in this land, the Sacred Land on which their belief was based. The Earth seemed almost new, like the day of the creation of the new world. Scattered across the eternal expanse, imprints of force, structured the ground reminiscent of the surface of the Moon.” 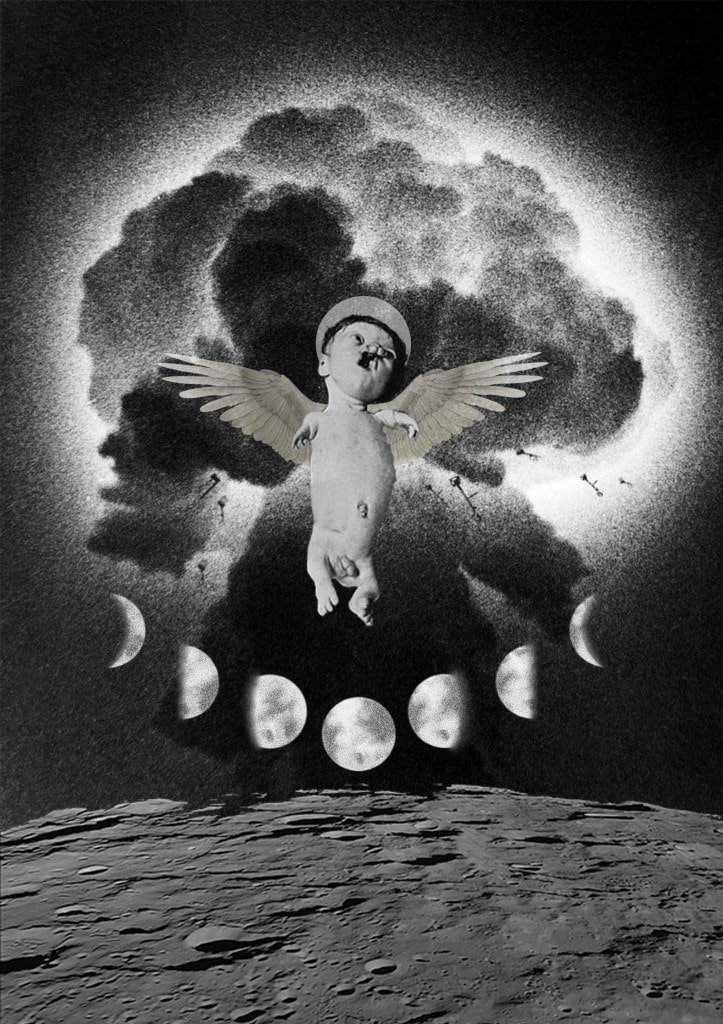 The holy holes is a project for the ‘cities and utopias’ masters studio at the Malaquais school of architecture in Paris dedicated to the study of utopian cities. With the goal of creating a sacred city, this project defines a religion that worships nuclear energy as it is an invisible, non palpable force that surrounds us, which gives it a mystical character. The choice to work on nuclear energy lies in its immateriality and its destructive nature. It is an infinite and omnipresent force that gives life but can take it at any moment. The believers are called atomists. 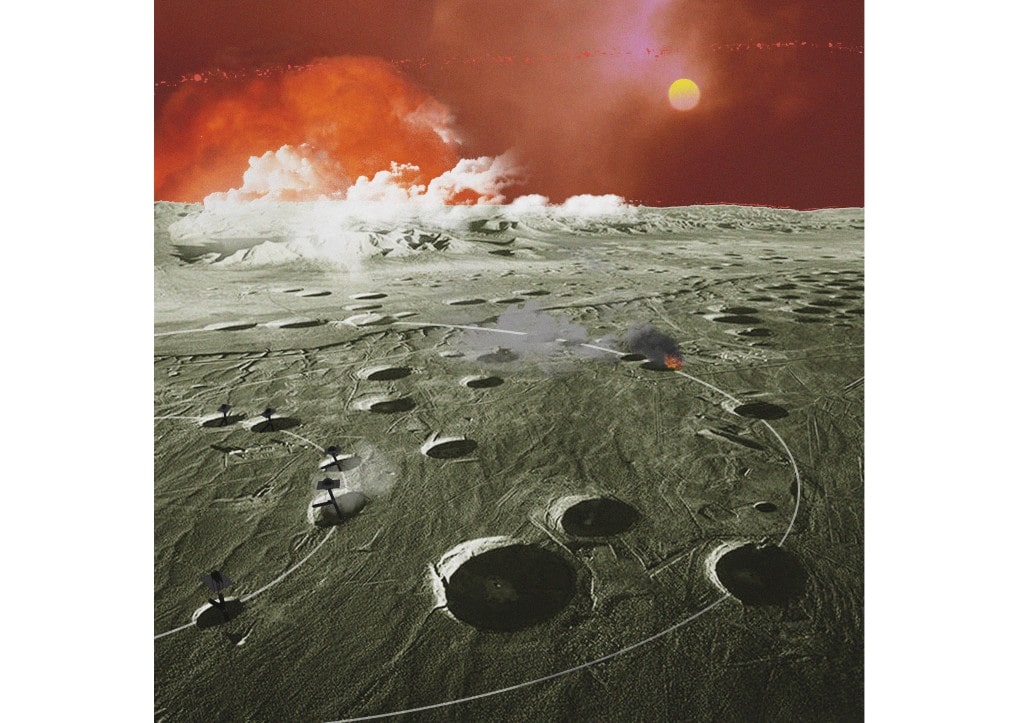 The project is located in the Yucca Valley in Nevada, on a former nuclear test site. The founding elements of beliefs, rites and practices, i.e. the holes, the ruins found on the site and the people touched by the sacred, represent the materialization of nuclear energy as the ultimate force. The city develops like a constellation, based on the principles of a sundial. It is a cult city where believers go to procreate, give birth and die, these stages constitute their pilgrimage. For this purpose four rites that retrace the creation/destruction logic have been determined: bathing, procreation, childbirth and death. In their practice, these rites are divided into two stages. 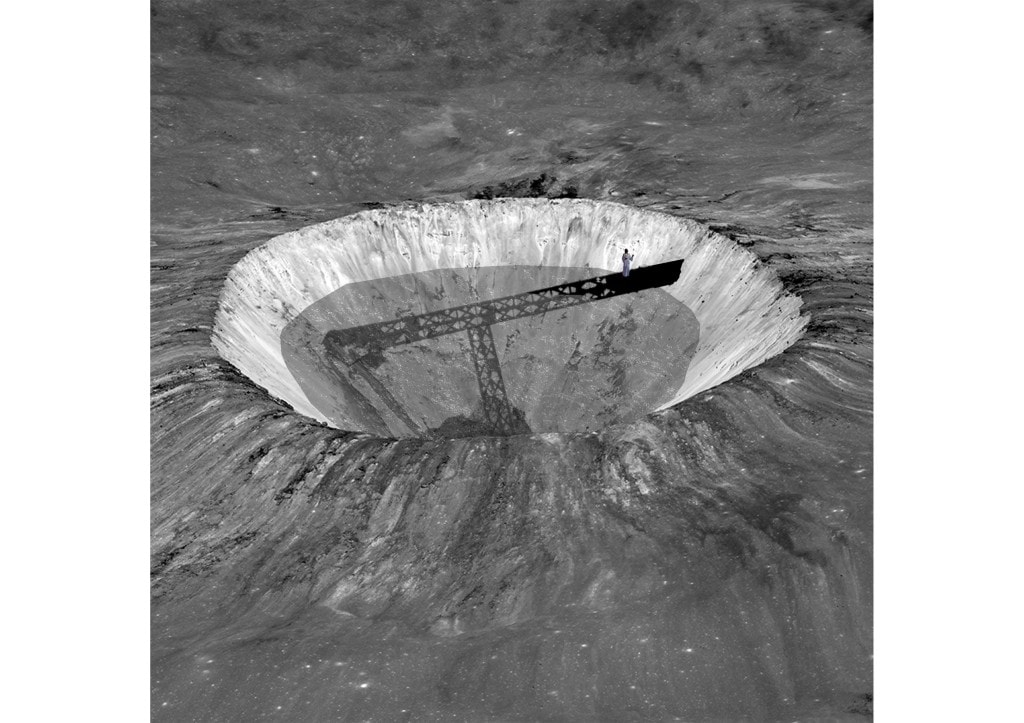 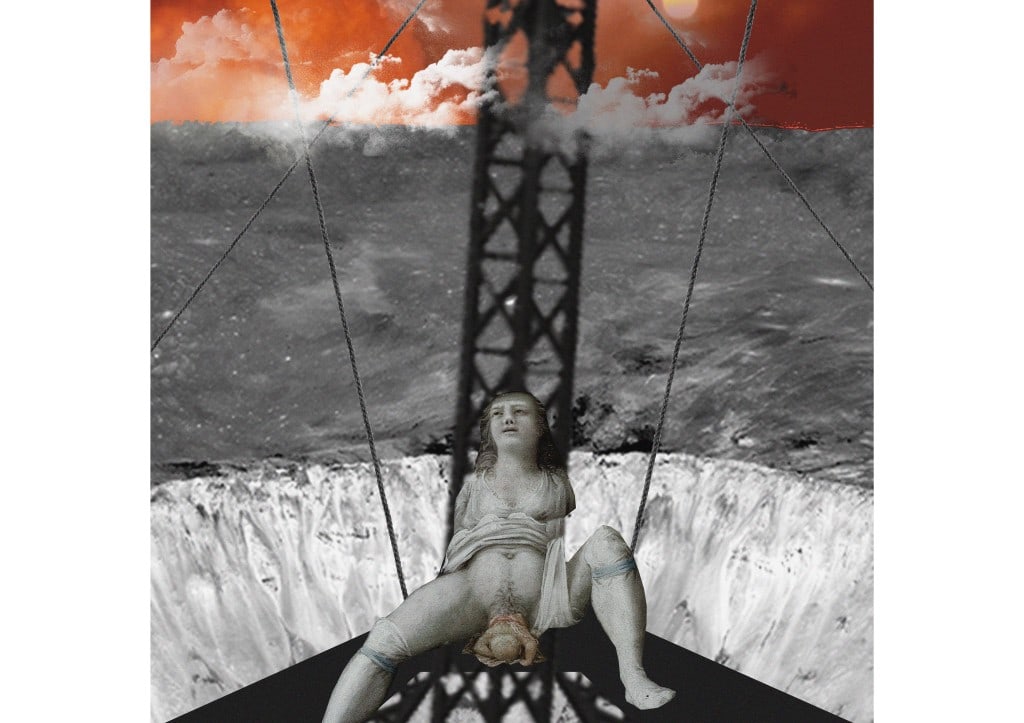 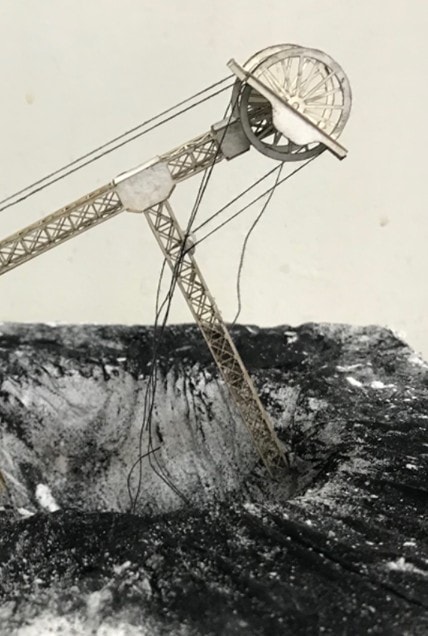 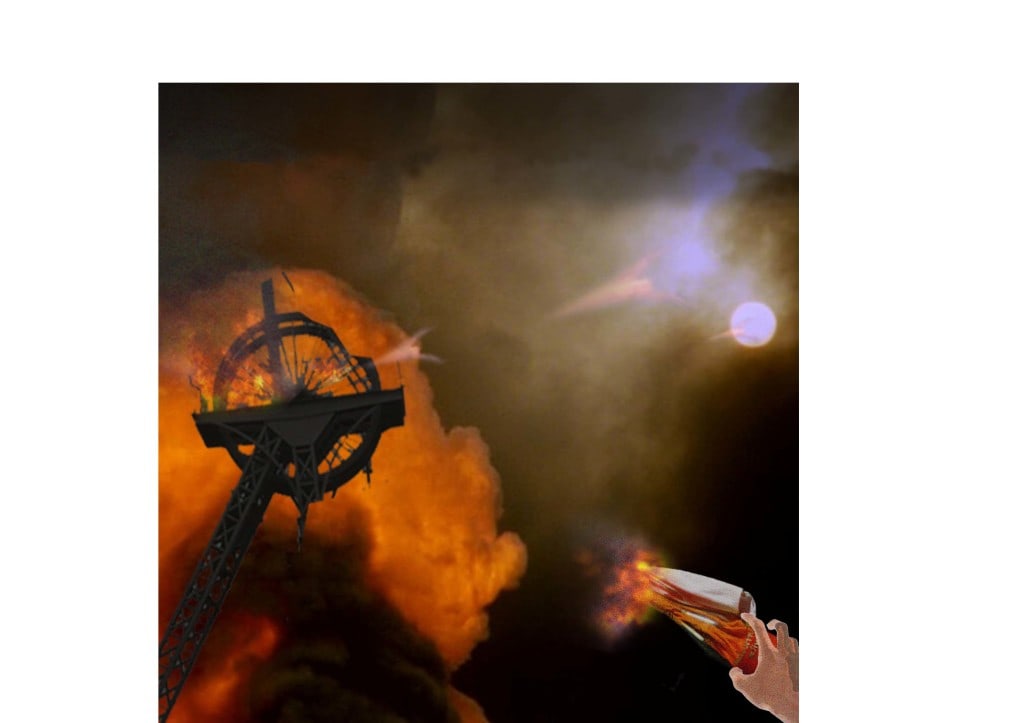 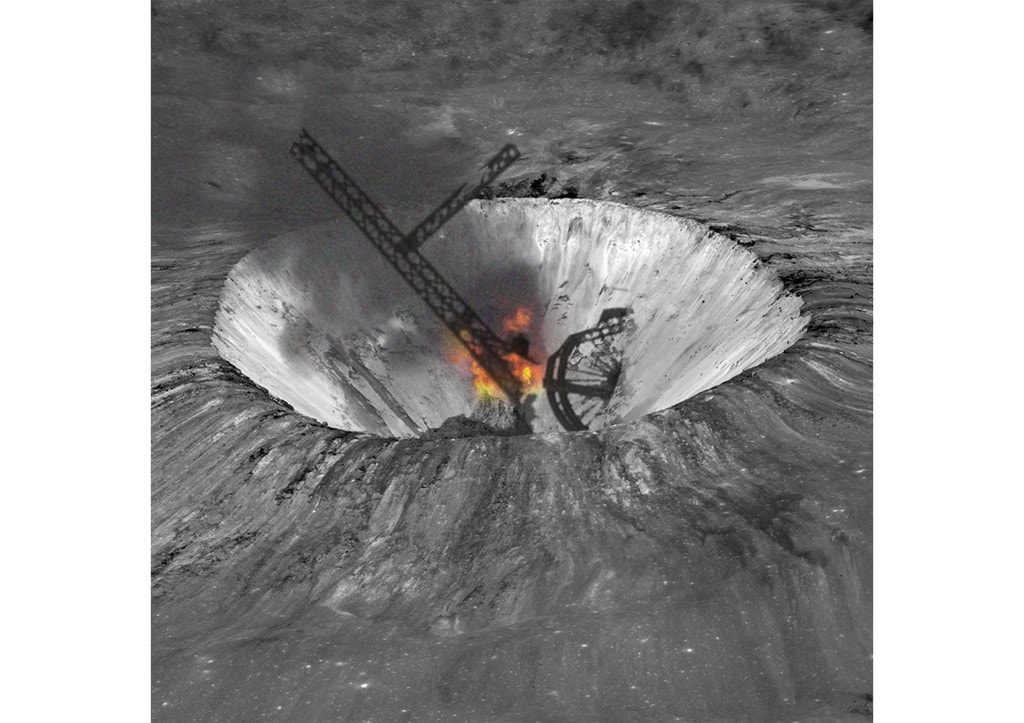 The bath suggests that after touching the holy water, the person comes into contact with the sacred energy, gradually detaches himself from the profane in silence and is reborn. Procreation immerses couples in caves to procreate. This rite revolves around the idea of divine creation: that of a child touched and transformed by the sacred. Childbirth is the rite of waiting for the arrival of a child touched by the sacred. The pregnant woman settles on the legs of the structure and by pulling on the ropes she activates the system of separation of the two legs so that she can give birth. The towers are all organized in an arc of a circle like an ancient theatre where the cries of pain of the women, the eyes riveted on the newborns, the arms of the structure moving, the towers balancing each other become a spectacle. The holes where there are births of sacred children determine the axis of the hole where the rite of death will take place because the rite of death consists of an offering of thanksgiving that allows the liberation of souls. For the rite of death the mummified bodies are attached to the celestial wheel, the inhabitants come to explode this object to reincarnate the artificial sun. The traces of the explosion draw an urban calendar. Death comes to close the cycle of life, and liberates souls as the nuclear explosion releases energy. 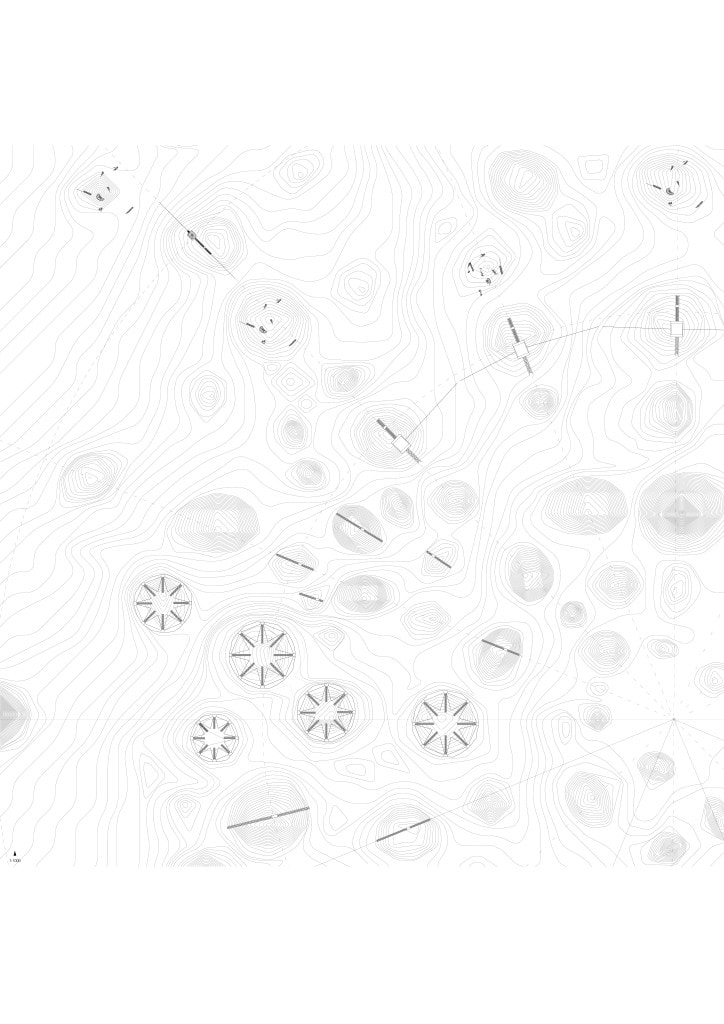 The mechanic structures machines are activated and concretize their sanctity by the infernal, continuous and archaic movement. Their lightness opposes the hole, massive and immobile. Deconstruction creates the city, ruins build the architecture. The machines are themselves witnesses to the force that is nuclear energy. Like animist monsters recomposed from pieces of legs, arms, feet, fragments that multiply and create the sacred city. 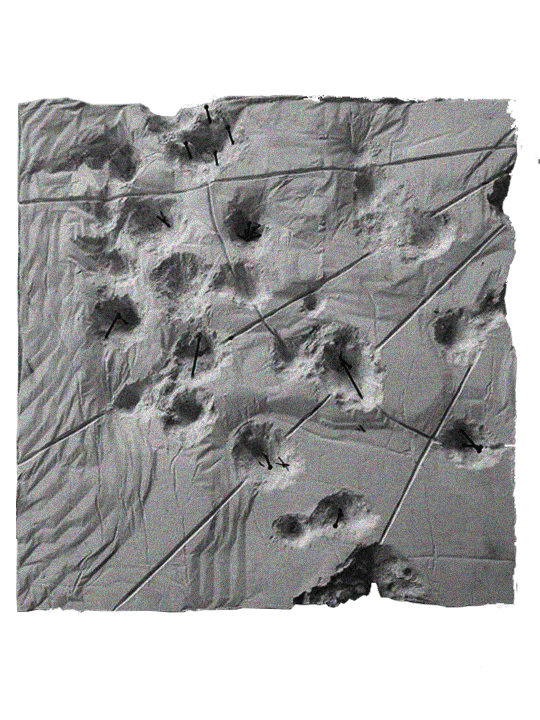 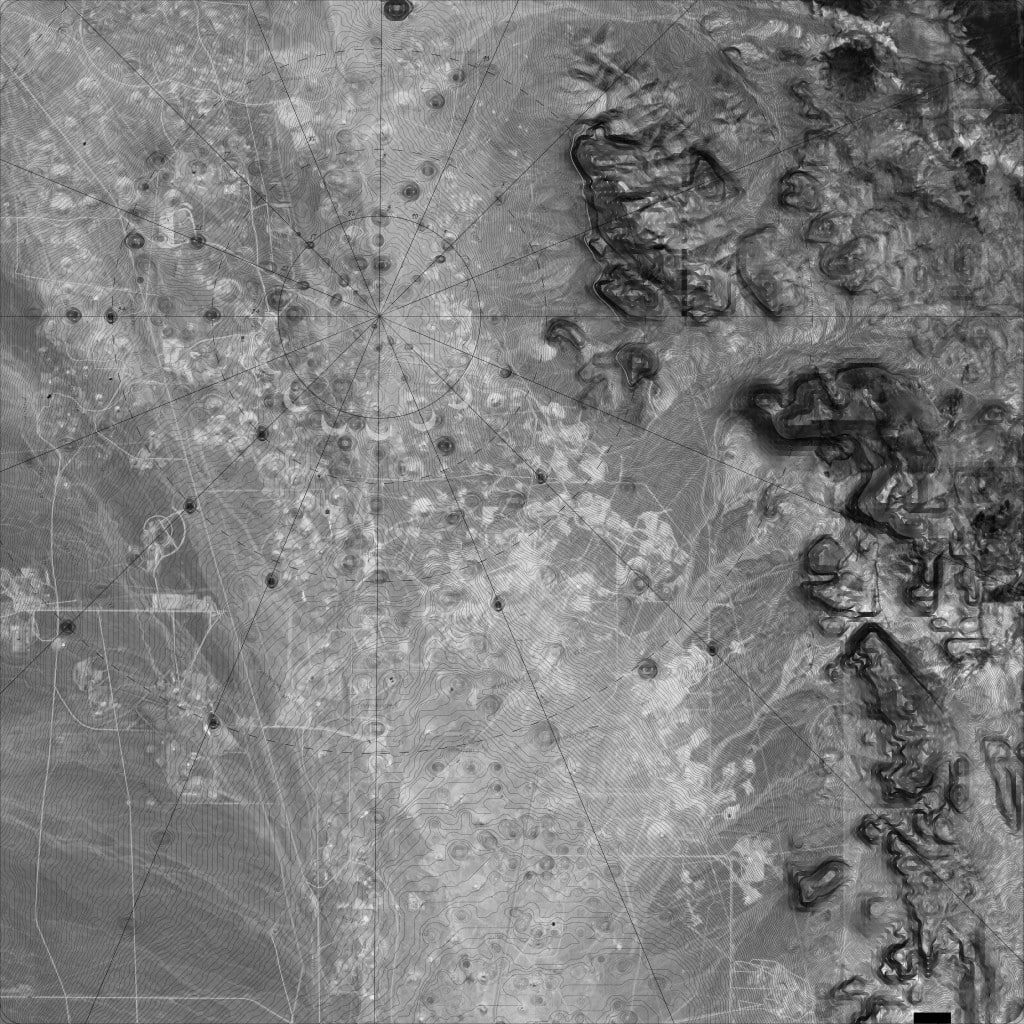