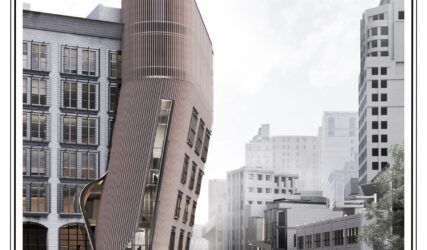 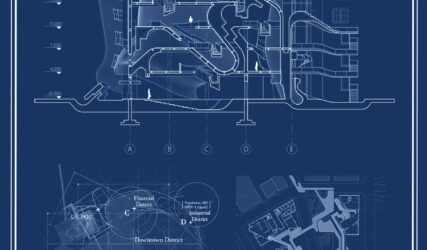 Downtown Detroit, America’s neediest hollow city, suffers from industrial decay and population losses. Such depression has thriven exclusive architectures with few and secluded entrance, which called Detroit Non-military Defensive Building. Thanks to these, urban is segregated into two catalogs: a comfortable, safe Eden inside the building and the wildness of crisis-ridden city streets.

Rebuild Civic Accessibility is a spatial and economic experiment of civic space. It’s going to reform a continuous street-friendly platform across the inner and outside architecture. Meanwhile, it attempts to demonstrate a paragon of equal economy accessibility for citizens, instead of capitalism’s dictatorship.

To bring the public back to the street and introduce an inclusive architectural edge. Apertures on facades will combine with extra circulation-form passageways to relink physical connectivity. Moreover, visual connection welcomes civic activities across architecture boundary and enhance street safety.

The inherent boundary between wall and slab becomes indefinable and syncretic, offering spatial flexibility builds up a 3-Dimensional internal network. Thus, it allows an equal occupancy of resources, thus promoting equal opportunities for participating in the local sharing economy.

The Detroit Non-military Defensive Buildings will inevitably prove their potential of providing enough space and opportunities to breed a new generation of great American cities.