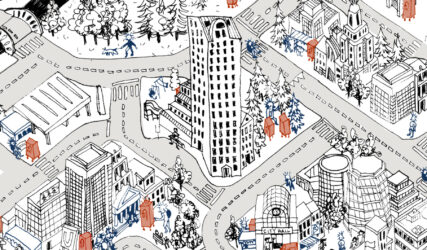 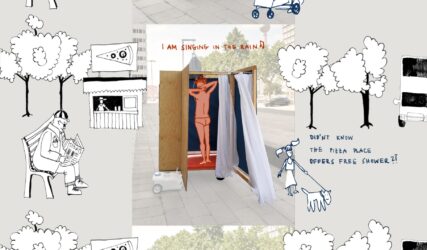 One goal of a solidary society should be a city where no one is homeless. However, we can no longer close our eyes to the fact that many people have no private retreat.
By a decentralized mobile infrastructure for shelterless people in public space, the whole society is sensitized for the topic homelessness. In this way it is possible to encourage the interaction among divers groups of people.

Roll and fold-out modules are set up in public spaces and offer retreats such as shower and washing facilities. The modular character of the intervention leads to a temporary appropriation of the public space for private use by people who otherwise have no access to the luxury of privacy. Thus, the public space is revitalized without excluding people from its use through consumerism and privatization. The small interventions offer a great potential in a simultaneity of individual and public use of public space. Only in this way can we stimulate a rethinking and prevent tendencies in current urban planning such as “defensive architecture”, which is designed in such a way that public space cannot be used by homeless people.

Public space must not just be accessible to all, it must be welcoming to all.